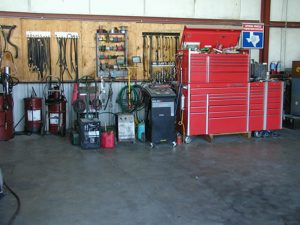 I took our pick-up truck to our mechanic shop yesterday morning because the check engine light has been coming on and the engine runs rough, especially in wet weather. It rained all last week, so it ran rough almost all the time.

I had them scan the computer: “multiple misfires”.

My pet theory has been that a spark plug wire was going bad. When it gets wet it arks to the block causing a misfire. What they said supported my suspicion.

“How long will it take and how much will it cost to replace the plug wires?”

“Oh, well you’re gonna want to put a new distributor cap on and change the plugs too, unless you’ve done that real recent…”

“And I’ll get it back today?” It’s rare that I get to keep the truck at all, normally Marie drives it to work. When I do get it, it’s for one day only unless we’re renting a car for her to use in commuting.

I left it with them and had Mom pick me up.  Her house is on our property, so it’s convenient when she’s home.

I didn’t hear anything from them, so I called mid-afternoon to see that it was done.

“Nooooooo… ” the little gal on the phones said, “he’s working on it I know, but it’s not done and I don’t know how long it will be.”

“Is there some problem? It was supposed to be a one hour job; once the engine cooled enough to work with.”

“No, no problem. They just got real busy.”

It still wasn’t done at 5:00. I borrowed Mom’s car and went after Marie. We stopped by on the way home. Two fellas were working on it in the driveway — just now taking the distributor cap off. The cap was broken and the wire boots were rotted. That’s why it ran rough in wet weather. They said they had to take the wheels off and go in through the fender wells to get the plugs changed.

Uh-huh. And that, thought I, took 8 hours? The fella said he’d finish it up this evening and it would be ready for pick-up in the morning.

“It will be ready by 7:30 tomorrow morning?” I wanted clear confirmation.

We took Mom’s car down there this morning, planning to pay the bill and let Marie take the truck on into town.

The mechanic that had been working on it was in the driveway talking to a fella with a truck-load of peaches. I interrupted them, “Is our truck ready to go? She (indicating Marie) needs to get to work.”

“It’s in the bay there.” Pointing to their one service bay. The one with a big red semi parked right in front of it and the nose pulled apart. “They’re replacing a radiator in that, I can’t get yours out until they finish and move that.”

“But our truck is done and ready to go?”

I look at the truck load of peaches. I look back at him.

“Or I’m fixin to. I just got here for my shift. I worked on yours until 7:00 last night when I went home. I come in and found things like this, and yours not done yet.”

They’re a 24 hour shop and do a lot of work on big rigs. They’re good mechanics, but apparently lack a bit in organization.

The Bible warns that when we speak in anger we end up saying hurtful things that we will wish we hadn’t (that’s paraphrased). I was definitely angry, I took a deep breath, said nothing, and got back in the truck. Marie said, “I *need* that truck today. Please call him as soon as it’s done so he can bring it to me.” He said he would.

By 11:30 I hadn’t heard anything, so I called. A different gal was on the phones this morning, “O yeeeeess, sweetheaaaart, it’s done and waiting fer ya.”

What is it with mechanics and phones? They will stand there, look you in the eye and say plain as day, “I WILL call you when it’s done.” I’ve never had one that did. Not one.

An hour earlier and I could have gotten a ride right down there with Mom, but in that time she had gone out and started painting her front porch again. I helped her get to a stopping point, then bummed a ride yet again. It’s only about 4 miles, but at this point of my life, that’s an awful long walk, especially along a rural highway with almost no shoulders.

The truck was indeed sitting outside. I paid the bill: they charged me the agreed upon price despite the fact that the one hour job took two days, and I headed into town to hook up with Marie.

My theory on all this is that because of the nature of this shop: specializing in big rigs, a little job like mine tends to get shuffled way down the priority list when the rigs start to show up and on-road service calls come in. It ends up being something they tinker with when they have a spare moment. If they think about it. Obviously my job is not any kind of priority.

My conclusion is that it’s time to find another mechanicn place — one that makes appointments and focuses on automobiles. Either that or invest a few thousand dollars in a mechanics tool set (and diagnostic computer) and a Chilton’s repair manual on our truck, and go back to doing as much of my own work as I can.

Or maybe buy just a horse.