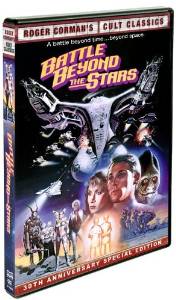 Battle Beyond the Stars, starring Richard Thomas, Robert Vaughn, John Saxon, George Peppard, and a host of others is the story of a young man who ventures out from his pacifist home planet when it comes under attack by the evil tyrant Sador. His mission is to find mercenaries who will come defend Akira and save his people. His vessel, Nell (which reminds me of a flying moose with breasts) is the last corsair in existence and comes with a sharp-tongued artificial intelligence.

Among the notables he picks up as soldiers of fortune are Gelt (Robert Vaughn) an ex-assassin who has nowhere to spend the vast wealth he has accumulated because he’s banned from every inhabited planet, Cowboy (George Peppard) an Earth man arms dealer, Saint-Examin (Sybil Danning) from a warrior race with a penchant for skimpy costumes, and Nanelia (Darlanne Fluegel) and android engineer who turns into Shad’s (R. Thomas) love interest.

Together this band of eccentric guns for hire return to Akira and prepare for Sador’s return. The battle that ensues is an epic space-opera style battle, and is fairly well done considering producer Roger Corman was on a 2 million dollar budget and half of that was spent on an abandoned lumberyard for use as a sound stage (according to the special features reel).

2 thoughts on “Movie Review: Battle Beyond the Stars”

Learning What I Already Know