I have, on occasion, been taken to task by someone who claims that the King James Version of the Bible is the only valid Bible; that the modern language translations are, at best, erroneous and, at worst, heresy.  They claim that the KJV is written as Jesus spoke, we HAVE to stay with that version.  To which I must reply, “Are you nuts?”  Here is why I must ask that: END_OF_DOCUMENT_TOKEN_TO_BE_REPLACED 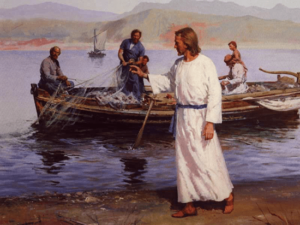 Luke goes into much more detail, starting with Jesus going home with Peter (then called Simon) for a meal and healing Peter’s mother-in-law of a fever.  In a later incident, Jesus was teaching one morning along the sea shore where these four fishermen were mending and drying their nets.  He asks Peter to take Him in his boat out a short distance from shore so He could speak without the crowds pressing in around him.  Peter complies.  Afterward, Jesus tells Peter to let his nets down for a catch. END_OF_DOCUMENT_TOKEN_TO_BE_REPLACED

Jesus was a Jew. He was born into the nation of Israel to Jewish parents. He was raised in the belief and traditions of Judaism. When Jesus taught about God and His Kingdom to come, he addressed, almost exclusively, the nation of Israel. Jesus brought His message of salvation to the chosen people of God first.

The Jews were looking for a Messiah that would free them from Roman bondage and make their nation great among the nations of the earth again – as it was in the days of David.

When John the Baptist began his ministry, he announced the arrival of their king. When Jesus began working miracles and teaching the people amazing things, they knew He was someone special, and they followed him around in droves. END_OF_DOCUMENT_TOKEN_TO_BE_REPLACED These days many people claim to be Christians and speak out on social issues claiming to be imparting a Christian stance. Some people point fingers at one another and say, “I am a true follower, you are an imposter.” How can we decide who is truly a follower of Jesus Christ and who is using that personification to promote their own agendas?

I John 2:3 gives us a very simple test that can be used to validate (or invalidate) a claim of being a true follower of Jesus. I would suggest, however, that we all use this test on ourselves before attempting to quantify anyone else.

Just as Jesus once slept peacefully in the stern of a boat while his disciples fussed and fretted over the raging storm, He also rested in a tomb as his followers dealt with a storm of confusion, disappointment and fear.  A day after his death, these emotions cycled endlessly through their minds.  Memories of the time they spent with him, planning and hoping for the new order they expected Him to lead them into played there too. Memories of what it felt like to walk upon a rolling sea, to feed five thousand people with the lunch of one small boy, to see Lazarus’s burial clothes left in the dirt, no longer needed.  No doubt they were heartsick with confusion.  What had gone wrong? END_OF_DOCUMENT_TOKEN_TO_BE_REPLACED