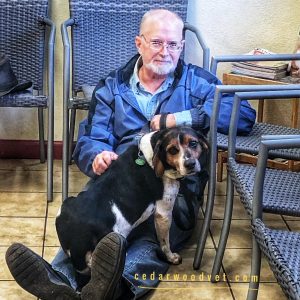 As you (probably) know, canine rescue is a passion of mine.  In learning to care for the dogs we’ve fostered over the past 8+ years, I often encountered dietary and nutritional challenges.  Finding solutions to those challenges opened the door to a LOT of research into dog food and the differences between food for humans and food for canines.  I even started making my own dog food! 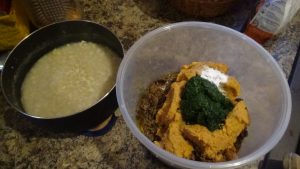 This is today’s batch of doggo stew coming together: Chicken, sweet potato, spinach, oat meal, and assorted nutrition additives. All proportioned according to the recipe plan set out in my latest book: Questions and Answers About Canine Cuisine available at:
https://www.amazon.com/dp/B08NDRBWGG

But it’s much more than a cookbook.

This is a concise compendium of nutritional information to help you keep your fur baby healthy.  Don’t want to do the cooking?  That’s fine, it covers what you need to know to find a commercial diet that is safe and healthy.  Want to know about the new fad diets?  Dr Sandra Manes DVM and I cover those too.  All in a handy 7×10 paperback with full color photography.

This book covers all aspects of canine nutrition and discusses everything from choosing a good commercial kibble to cooking your own dog food (including recipes). We also cover raw diet, grain free, all-meat, boutique meals, and we have a hard look at proper nutrition for dogs dealing with diabetes, heart disease, kidney disease, and cancer.  Tons of useful information presented for the average person in a lighthearted writing style.  This is one of those books you’ll refer back to often because it offers so much great expert information.

I am occasionally chastised by friends and family for not owning a smart phone.  “Why would you not want one, it’s so convenient to have all your stuff right here on one device.”  Which may be true – until you drop that repository of everything you do, know, and need in the toilet and lose it all.  Or it’s stolen and someone else has access to all that info.

But the main reason I don’t want a smart phone is explained very well in the videos below.  Think it’s a conspiracy theory?  Well, there is a conspiracy, but it’s no theory.  This has all be proven through testing and scientific study.

This one does into depth on the How and Why of it all.

I was at my veterinarian’s office and I quipped that if they were an airline I’d be getting frequent flier miles as often as I find myself going in there.  The lady behind the desk said, “We have a rewards program.  You need to be on it, it will save you a lot of money.  Just go to our website and download it.”

I went looking for Cedarwood Veterinary Hospital’s rewards program.  I found it and was sent to the PetDesk web site where I found:
.      What devices does the app work on?
.             PetDesk is available on IOS and Android devices (Mobile or Tablet). 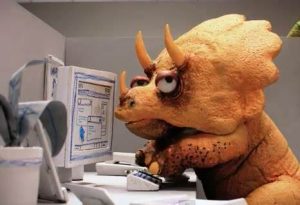 Not available for a Windows laptop.  Rats!  I felt like lodging a complaint for discriminating against us dinosaurs who don’t have a smart phone.  I decided instead to gripe about it to my best bud: Electro-Man Mike.

Mike is a retired network engineer who knows computers, networks, and security stuff inside and out.   Mike told me that Android emulators are available to run Android aps on a windows machine.  He even gave me a link to a web page that listed and reviewed a fair number of them.  I went with BlueStacks, the top rated emulator.  Top rated and free … can’t beat that!

I installed BlueStacks, booted it up, went to the Google store from within the emulator, located the PetDesk ap, and installed that.  When I booted up PetDesk it asked for a small amount of information and WHALA: my veterinary records were sitting there in front of me.  It was kind of spooky how easy that was.

So if you encounter any other of us dinosaurs who don’t have a smart phone but want to use one or more aps made for an Android phone, tell them to Google “BlueStacks Android Emulator”.  And try not to get stuck in a tar pit.

In the news feeds this morning is a report of another earthquake here in East Tennessee.  This time a 3.0 magnitude quake centered in Knoxville.  That’s not far from us.  I didn’t feel anything, but it gets me to wondering about the frequent earthquake reports I’ve been seeing:  is Tennessee about to tear itself to pieces or is this normal and we just haven’t noticed it before?   Let’s ask the experts.

www.Eartquaketrack.com says East Tennessee has had: (Mag. 1.5 or greater) END_OF_DOCUMENT_TOKEN_TO_BE_REPLACED

Huge numbers of ladybugs are swarming as they seek shelter from the coming winter cold. But these bugs are more than an annoyance: they are invaders from another continent.

Every fall since we’ve been here we have experienced an increase of activity in “lady bugs”.  Early on it was so slight we barely noticed but in recent years it has been increasing in intensity.

Why Do They Bite?

My guess on this is that because all forms of ladybugs feed on aphids and the larval stage of several insects (thus earning them the status of beneficial garden insects) at this time of year these large concentrations of ladybugs cannot find enough to eat and turn to biting other creatures (like me) trying to obtain sustenance.

Actually the American Lady Bird beetle is not known to bite, but the Asian Ladybug does.  It is not toxic,  but not only is the bite painful, some people are allergic to it.

Visually, the two are very similar and the untrained eye may be fooled. Both are similar in size (though the Asian beetles tend to be a bit larger than the American) and shape.  Both can be from yellow to red in color.  Both have black spots.

But there are some consistent differences that make it possible to tell them apart.

Why Are Asian Beetles Here?

The Asian ladybugs were brought into the United States by the USDA and Forestry Commission to relieve the hardwood forests of many disease carrying aphids, mites, and scale insects.  But, the Asian species of beetle proved to be hardier and stronger than the American species.  The two compete for the same food sources, and the Asian species carries a parasitic fungus that kills other species of ladybugs.  Now the American Lady Bird Beetle is on the endangered species list as, once again, something imported is killing off the native species.

And from the looks of things lately, they’re gunning for us next!

There are only a few airplanes (that we know of) that can fly at 70.000 feet or above. The SR71 Blackbird has logged at least one flight at just over 85,000 feet (July, 1976) [1] and the The X-43A flies at 100,000 feet while still using an air-breathing engine (not a rocket) [2].  But only one plane routinely flies to the edge of space and back, and it’s actually a relic from the 1950’s.   Although each plane is periodically stripped completely, x-rayed, and refurbished, the design has remained essentially the same over all these decades.  Why? Because it works. END_OF_DOCUMENT_TOKEN_TO_BE_REPLACED

Most people are aware that Epsom salt makes for a soothing bath if you have itchy skin or sore muscles, but did you know it’s also beneficial to some of your garden plants?

Before using Epsom salt it is recommended to have your soil tested for magnesium content; amending it may not be needed.

Most flowering plants can benefit from the use of Epsom salt.  This includes flowers such as roses.  But my focus is the vegetable garden, so I’ll confine my discussion to those plants.  The primary benefactors are the nitrogen hungry plants like tomatoes, potatoes, peppers, eggplant, cucumber, squash, and zucchini.  Do not use it on beans (which are nitrogen fixers) and leafy greens like lettuce, spinach, chard, and kale.

END_OF_DOCUMENT_TOKEN_TO_BE_REPLACED

Here’s an interesting bit of computer history: the Apple 1 home computer.  This was the brain child of Steve Wozniac, who later became the co-founder of the Apple Computer Company.  But that came later.

Steve Jobs (left in image above) and Steve Wozniak both worked for Atari at the time and met in a friend’s garage in the late 1960s.  The two of them bonded over their shared interest in electronics and practical jokes.  Wozniak was a wizard at designing compact, efficient circuitry.  Steve Wozniak and Steve Jobs debuted their prototype Apple 1 at the Homebrew Computer Club in 1976. END_OF_DOCUMENT_TOKEN_TO_BE_REPLACED

If you are a regular reader here, you know I serve as a foster care provider with Steele Away Home – Canine Foster and Rescue.  Being a charity, we are (always) raising funds to keep doing what we do.  We have a new way for you to help … and all you have to do is — SHOP!  You like shopping right?  Do you shop on Amazon.com?

Steele Away Home is an all-volunteer run 501(c)(3) and is now GuideStar accredited and registered with Amazon Smile.  If you select us as your beneficiary, Amazon will donate a percentage of THEIR profits from your purchase to us as your chosen charity. END_OF_DOCUMENT_TOKEN_TO_BE_REPLACED

More and more I encounter people who talk about how much they’re involved in and how many things they do.  Quite often this is delivered in the form of complaint.  I have to wonder, who is it that puts these burdens upon them?  Is it not they themselves who choose to engage in so many activities?

I also note that some of these people are not especially good at some of the things they do.  Some seem to be forever working toward things they never actually achieve: chasing after something that eludes them because they’re weighed down with too much detritus not related to that goal. 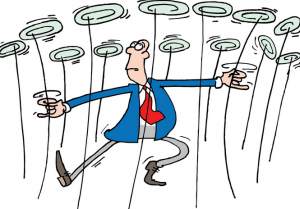 Our modern world sets this scenario as being the norm and anyone who is not over-burdened is lazy.  I see sayings like, “If you want something done, give it to the busiest person you know.”  At first glance that seems to make sense, but upon deeper examination it falls apart.  Is that person “busy” because as soon as they finish one task they take on another or because they accomplish little: just trying to keep all the plates spinning?  Too often it is the latter. END_OF_DOCUMENT_TOKEN_TO_BE_REPLACED