I had an interesting experience this morning. It started last night.

I needed a tool. I need it quickly and Amazon.com is no longer doing the two day delivery thing. I decided to see if our local Lowe’s had what I needed. They did, but the web site warned that stock on this item is low and I should purchase quickly. I was going to go to Lowe’s the following morning but was concerned that I’d get there and find that tool had sold out before I got there. This has happened to me before. Whether they actually sold out or the web site lied to me about how many were on hand is hard to say. Computers are not as infallible as some like to say. Not as long as people run them.

I decided to secure my tool by ordering it on-line for store pick-up in the morning. The web site sent me an e-mail saying the tool will be available for pick-up from the pick-up lockers just inside the main entry, and gave me a bar code to use in collecting my purchase. That’s something new! I printed out the page.

Lowe’s claims that this form of store pick-up reduces interpersonal contact, and so is safer for everyone in this age of pandemic.

Armed with my print-out I drove into town, parked in the Lowe’s lot and went inside. Sure enough, there was a bank of lockers of various sizes and shapes.

The terminal said to scan my bar code and the locker containing my items will pop open. It wasn’t quite that simple. Being a newbie I didn’t know the secret hand gesture that is required to get the terminals attention. But once I was indoctrinated a door popped open and there sat my tool.

Being the weirdo that I am, this got my mind to running as I rode the interstate home. What would be the logical evolution of this technology if pursued?

I saw big box stores replacing almost all of the store employees with picker robots like Amazon.com uses to manage their warehouses.

A company would only need a few Bot Wranglers to oversee things and throw the power switch if the bots go crazy and start busting the place up.

Customers order on-line with their smart glasses (because computers and even phones are a thing of the past by then), bots run around collecting the items and stashing them in a locker, then the system sends the customer the pick-up code. Large orders, like building materials or appliances, would be in a large locker on a robotic sled that will follow you to your truck so you can transfer the load (it might even help), then return to the store.

Of course the pick-up terminal will be peppered with cameras and maybe a taser cannon to prevent vandals or looters from damaging the lockers.

I can see all the big box stores: Wal-Mart, Sam’s Club, Target, Home Depot, Lowe’s, etc going this route. This will be a major bummer for those who enjoy spending hours and hours shopping for stuff they didn’t know they needed. But I guess we’ll always have malls for that.

So, what do you think: possible? Probable? Or totally outlandish?

As a kid, the highlight of my week was laying on the floor of our living room and watching the weekly episode of Lost in Space.  I thought that was the greatest show ever made!  Many years later I revisited a few of those episodes and came away wondering, “What was I *thinking*?!”  By modern standards the classic version left a lot to be desired.  Still, I remember it fondly as a major part of my childhood as my love for science fiction bloomed. END_OF_DOCUMENT_TOKEN_TO_BE_REPLACED

In my interview with Sonia Rumzi I mentioned that I produce snippets of dialogue or stories as a mind stretching exercise, I call this a brain spill, and that I keep these snippets as seed-stock for future story ideas.  Some have asked for a peek into my Pandora’s Box of story snippets.  The following is one such.  It is quite raw, I’ve fixed up the typos but have not done any editing or polishing.  It is just a fragment, the sort of stuff that spills out of my brain box when I open the lid.

END_OF_DOCUMENT_TOKEN_TO_BE_REPLACED

The following is chapter one from a book I wrote in 1984.  It is part of a trilogy.  The publishing houses refused it back then.  After wall-papering my office with rejection slips (it was a small office) I packed it up, tucked it away and forgot about it.  A recent decluttering brought it to light again and I’m thinking of producing it as an eBook.   I have always considered fiction to be my weak suit.  Please read this sample chapter and give me your opinion as to whether or not this book has potential to sell.  This is a Sci-Fi book, if you hate Sci-Fi, you are excused, thank you for coming, I hope to see you next time.  To the rest of you, if you saw this as a sample of the book, would you find it compelling enough to buy the book?

Thank you for your input, feel free to be honest, that is what I am asking for. 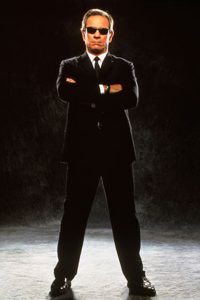 “’Scuse me son, we need to talk to you about what just happened here.” said the big one.

“Talk … me?” Their arrival had barely registered on his conscious mind before.  Now, distracted from his wonder and terror he looked them over and his heart sank.  Before him stood two men; early middle age, muscular, clean shaven, short hair.  Each was wearing a well tailored suit; black, white shirt, black tie.  And sunglasses; why always the sun glasses?  One held out a wallet displaying a badge and government-issue ID.

Black Box Blues is a sci-fi short story about a family whose starcar breaks down in a back-water solar system and are forced to seek help from the locals to get on their way again.

Just as we emerged from the gateway two indicators came to life on our ­car’s console. The green light indicated that this cluster’s nav data had been ­picked up and stored in memory. The red one, that a piece of the car’s ­micronics had fizzled out of existence. Something profane immediately came to ­mind, but since the kids were on board, I kept the thought to myself.

“Something wrong, dear?” Rhiannah, my wife, sat in the front seat­ opposite mine.

I typed a command on the keyboard and the computer ran a diagnostic check ­on all the car’s circuits. A moment later the results of the check-up scrolled­ down the console’s video screen. It displayed the part number of the ­defective module, what circuit it was in and on what board that circuit would­ be found. It also displayed a disheartening message:

THIS IS AN ESSENTIAL CIRCUIT IMMEDIATE REPAIR IS MANDATORY.

This time the profanity slipped out.  Read the rest…

Black Box Blues pokes fun at the modern trend in automobile design – as seen by old shade-tree mechanics like myself who tend to prefer older cars and trucks because of their ease of repair.  That was the impetus for this story, but the tale itself is about Tighe’s adventures with a less advanced species of beings as he searches out parts that will work in a cobbled together patch-up of his wife’s new starcar so they can resume their family vacation.  I hope you enjoy it.  D.B.

As part of our Simple Life Formula, Marie and I have a few standing traditions that help us appreciate one another and enjoy life.  One such is Schlocky Sci-Fi Friday

Every Friday evening Marie fixes Chinese food and we curl up together on the sofa to eat the Chinese food and watch an old B grade (we prefer the term ‘Classic” ) science fiction movie.   Movies from the 1950’s and 1960’s and in black and white are preferred.  Among our all-time favorites are such classics as The Day the Earth Stood Still, Destination Moon, and Rocketship XM but we have a large collection of movies on DVD and VHS, the majority of them Sci-Fi.  Another “classic” joined the file last night.
(No spoilers here) END_OF_DOCUMENT_TOKEN_TO_BE_REPLACED

This week’s Schlocky Sci-Fi Friday Movie was one of our favorites; a timeless classic: The Thing From Another World.

Arctic researchers witness the crash of what they determine to be a UFO.  When they investigate the crash they find and retrieve a large humanoid alien who had been embedded in the ice.  Assuming the thing to be dead, they return to their base with it.  But, of course, it is far from being dead.  At their base it goes on a rampage and kills a couple of the scientists who, determined to communicate with it, buck the military authority.   The Thing, then sets about accomplishing what was (apparently) its mission. END_OF_DOCUMENT_TOKEN_TO_BE_REPLACED

I’ve been a fan of Star Wars since the first movie hit the screens in 1977.  So when I came across this sweet nostalgic shot of the Star Wars cast (except C3-PO) I just had to share it.  I’m not sure of the original source… that’s the way it is with stuff on the Internet.

To round out the set, this is Anthony Daniels, who inhabited the C3-PO costume.  He’s very thin!

This week’s Classic Sci-Fi Movie selection was another great example of the 1950’s creature features, except this one stands head & shoulder above its brethren.  Movies like Beginning of the End, Creature From the Black Lagoon, Monster From Green Hell, The Giant Gila Monster prove entertaining  in a “so bad they’re good” fashion.  But, despite its Saturday Matinee style title, Them! delivers a crisp and witty script, high quality performances from the actors and some decent special effects – considering that this film was made in 1954. END_OF_DOCUMENT_TOKEN_TO_BE_REPLACED