I am occasionally chastised by friends and family for not owning a smart phone.  “Why would you not want one, it’s so convenient to have all your stuff right here on one device.”  Which may be true – until you drop that repository of everything you do, know, and need in the toilet and lose it all.  Or it’s stolen and someone else has access to all that info.

But the main reason I don’t want a smart phone is explained very well in the videos below.  Think it’s a conspiracy theory?  Well, there is a conspiracy, but it’s no theory.  This has all be proven through testing and scientific study.

This one does into depth on the How and Why of it all. 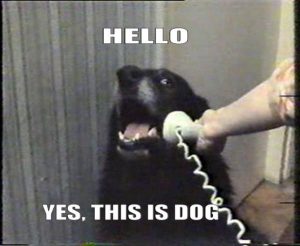 I’m getting into playing games.  Not board games, not even computer games, but head games … with telemarketers.

I have been using the technique of just not answering the phone if I don’t recognize the number.  That’s fine as long as no one you don’t know is likely to be calling you, but recently I’ve been on the other side of that fence and have had to answer calls that were potentially important.  And, there is the fact that a no answer just seems to keep me in their dialing queue so they just keep calling for ever and ever.  So I decided to take them on and see if I couldn’t get them to take me out of their listing because they know it’s a waste of time calling this number.

Last night was a fella selling burial insurance.  He had a fancier name for it but that’s what it was, and we chatted a for a bit about the high cost of a funeral and internment.  Then he asked me how old I am.

He said some angry things in what sounded like Russian and hung up.

This evening it was a fella named Tom from GE Home Security Systems.  He talked about what a dangerous place the world has become and asked if I was concerned about my home’s security.

I’m starting to like this.  I’ll keep track of who calls and see if they call back.  If not, I’ll just keep on with this program.  It’s kinda fun.

Being a writer, I take language: the meanings and flow of words, seriously.  Words have power and precise meanings.  Effective communication means using words properly.  Throwing together a mish-mash of terms or making words up by splicing improper suffixes onto a good word breeds confusion.  Even newscasters are trying to sound hyper-intelligent by tossing out big words spliced together using parts of two legitimate words.

But common terms are abused as well.  Just now I was asked if my truck runs on diesel gasoline.  This was not an either-or question, it was a yes-no question.  Diesel fuel and gasoline are two different things.  Using them together caused a train crash in the switch yard of my brain and boggled me for a moment.

An acquaintance often used the word “empowerized”, a melding of empowered and energized to convey vitality and excitement.  But it sent a little shiver up my neck every time I heard it.

A few other language laughables I can think of include:

I could go on, but you get the idea.  And this doesn’t even get into words like irregardless.  Regardless means without regard.  Sticking the “ir” on the front makes it mean “not without regard” which is the opposite of what they’re trying to say.  There are SO many of these in common use today that I could go on all day.  But I’ll spare you that.

Now to be fair, the English language that we have today was made up by sticking bits of words from many other languages together.  And it evolves as each generation rises up and squishes it into their own mold of preferred expression.  So I may have no right at all to complain about younger people making up or twisting words into new meanings.  Maybe I’m just getting old and cranky.  Maybe I should just suckupicate and deal with it. 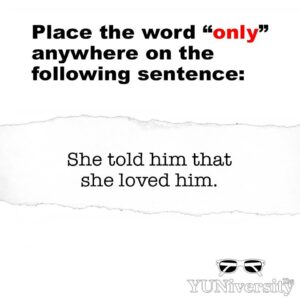 There is a meme going around that illustrates the power of word placement very well: place the word “only” anywhere in the sentence and see how the meaning changes, yet it remains a proper sentence.  I won’t go through all of them, but let’s look at a few.

Only she told him that she loved him.
No one but her has told him of their love.

She only told him that she loved him.
Her profession of love for him was not sincere.

She told only him that she loved him.
She admitted her feelings to him but no one else.

Go ahead and work the rest out in your head and you’ll see that this sentence has many diverse meanings depending on where you place “only”.

And then there is this “rule” for descriptive words put out by the BBC: END_OF_DOCUMENT_TOKEN_TO_BE_REPLACED

I inwardly cringe as I walk up the steps to the door.  Just inside I am met by a large fellow with a round, ruddy face.  He smiles broadly, “Well hey there, Doug, how you doing?” and sticks his hand out.  I wonder for a moment what would happen if I told him how I’m doing – but immediately dismiss that.  I’ve seen it before. I’d tell him about my concern and that would open the door to a rebuttal involving a litany of atrocities that make my ailments seem penny-ante indeed. So I shake his hand and say, “Fine, just fine.”  I deliberately leave off the expected, “and you?”  We will just leave that door closed.   We smile at one another and move in divergent directions.

This exchange is repeated a half-dozen times before I locate a spot that is the slack-water of the room where I can be present, but out of the way.  Not hiding, but not easily accessible either. END_OF_DOCUMENT_TOKEN_TO_BE_REPLACED 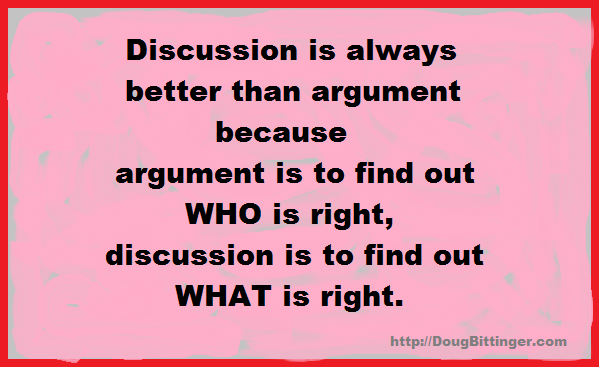 As Christians, should we have an open mind toward opposing or alternate viewpoints or close our minds and hold steadfastly to our beliefs? Can we learn anything valuable from those who disagree with us or engage us in argument?

First, can we learn anything from our antagonists? Yes, we can learn what it is that causes them to have an opposing opinion. When we learn that, we may be able to counter the conditioning that helped them form that opinion – or find that their opinion was simply passed along by someone else, not based in any experience. END_OF_DOCUMENT_TOKEN_TO_BE_REPLACED 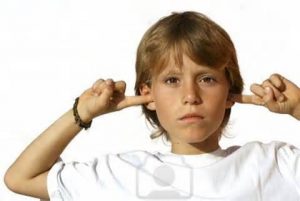 The saddest words any parent can hear is their child saying, “I don’t need you.”

The saddest realization any parent can experience is that the child is right.

Where were you when they wanted a lap to sit in and be read to?  Where were you when he wanted you to attend his softball games, when she had a recital, when they had some personal crises and needed your guidance?  At work?  Or saying, “We’ll talk tomorrow, I’m too tired tonight.”

And now that you have come to the point where you want to be adviser, mentor, confidant… they have no need of you. For so long they have fended for themselves they do not need, or want, your input.

You are, after all, just the breadwinner.

Knowing when to trust who can be a difficult part of life. This is nothing new; Eve was deceived by the serpent in the Garden of Eden, and that serpent has been spinning lies designed to misguide ever since.

Jesus addressed this issue for His followers in His sermon on the mountain. 15 “Watch out for false prophets. They come to you in sheep’s clothing, but inwardly they are ferocious wolves.  16 By their fruit you will recognize them. Do people pick grapes from thornbushes, or figs from thistles? 17 Likewise, every good tree bears good fruit, but a bad tree bears bad fruit. 18 A good tree cannot bear bad fruit, and a bad tree cannot bear good fruit.  19 Every tree that does not bear good fruit is cut down and thrown into the fire.  20 Thus, by their fruit you will recognize them.

Here He uses three similes to illustrate His point: a wolf, a road, and a tree. END_OF_DOCUMENT_TOKEN_TO_BE_REPLACED

I use Facebook to help the dogs we foster find their forever homes. Or at least that’s my hope. But sometimes I wonder if the effort I put into them is well spent or wasted.

I’ve tried building a separate page for each dog. That has the advantage of making it easy for interested parties to find a whole collection of pictures, videos, and descriptions that help them learn about that dog’s personality and temperament. The drawback is that each time I launch a new page I start from scratch in trying to build traffic to that page. That can take time.

I also have a Facebook account for Cochise: our 95 pound American Bulldog who was our very first foster dog. We adopted him and he has become a mentor to the other fosters. I’ve also hired him to be the spokesdog for Piney Mountain Foster Care. The advantage of posting doggie adventures on Cochise’s page is that he has a steadily growing audience to which all new dogs are easily introduced. The drawback is that someone going to Cochise’s page may have to scroll through many screens of posts to find all the posts about one particular dog.

The question must be asked occasionally, “Does any of this do any good?” END_OF_DOCUMENT_TOKEN_TO_BE_REPLACED

I know advertisers team up with social media platforms to track users and target social media advertising to those user’s specific needs.  Many have been the times that I’ve searched for something, and for days afterward versions of what I was looking for pop up in on-site ads and in the sidebar of Facebook.

One time my buddy was telling me in an email how relieved has was that he finally backed over his weird  mailbox and destroyed it.  He sent me a link to a store page for a box that was very similar.  I agreed, I’d be relieved to be rid of it too.  In this case I did not search; I used a direct link in an e-mail.  Still these Victorian mail boxes kept popping up all over the place.  I had to do a couple of searches for things I didn’t care about just to be rid of them!

Marie puts the annoyance of social media advertising to work for her.  When she wants a new pair of shoes or a skirt for work, she does a search and checks her favorite places.  If she can’t find what she wants, she stops looking and goes into Facebook.  More often than not, there: in the side bar, is just what she wanted.

But the ad I saw today really got my neck hair up on end: That is a photograph.  Does this advertiser have some utility that stamps a name on a stock photo and serves it up on Facebook?  How do they avoid stupid stuff like “Lopez, another Celtic legend”?  Can it be that it’s hooked into a database that actually makes a good guess at a name’s origin?  I had to know…

I see a lot of sweatshirt ads.  Most are stock designs that have something to do with being a writer, or supporting pit bulls, or bear an encouraging bible verse: these things I expect to see because they are broad spectrum interests as well as being things I talk about.  A lot of people would buy those.  But “Bittinger” shirts? END_OF_DOCUMENT_TOKEN_TO_BE_REPLACED