In the news feeds this morning is a report of another earthquake here in East Tennessee.  This time a 3.0 magnitude quake centered in Knoxville.  That’s not far from us.  I didn’t feel anything, but it gets me to wondering about the frequent earthquake reports I’ve been seeing:  is Tennessee about to tear itself to pieces or is this normal and we just haven’t noticed it before?   Let’s ask the experts.

www.Eartquaketrack.com says East Tennessee has had: (Mag. 1.5 or greater) END_OF_DOCUMENT_TOKEN_TO_BE_REPLACED

Yesterday evening I heard what sounded like a small pack of coyotes moving through the area, yapping and cutting up like a canine street gang making their presence known and threatening to hurt anyone who got in their way.

When I let my dogs out for their bed time potty run I made sure all the floodlights were on and I went out with them carrying a strong flashlight.  I hoped that lights and a human presence would be enough deterrent if, indeed, one or more coyotes were in the immediate area.  My yard is fenced, but most fences mean little to coyotes.

Later, as I was sitting in bed reading, I heard a single blast of what sounded like a shot gun.  Very near by.  Then it got real quiet. I was cautious again this morning, but it sounded like that pack of punks learned a little respect for humanity.

Is This Even Possible?

Is it possible that coyotes are in our area?  We’ve not had them before.

Oh yes!  I know people who have personally told me of their own encounters with coyotes.  These people live along O’Neil Road: just to the north west of us, and in Bridgeport: just to the north east of us.  My neighbor says he saw one walking up our driveway towards the woods one morning a while back.  So, yes: this is a real threat and a grave concern to me.

According to the Tennessee Wildlife Resources Agency, this is how to deal with coyotes:

END_OF_DOCUMENT_TOKEN_TO_BE_REPLACED

There are only a few airplanes (that we know of) that can fly at 70.000 feet or above. The SR71 Blackbird has logged at least one flight at just over 85,000 feet (July, 1976) [1] and the The X-43A flies at 100,000 feet while still using an air-breathing engine (not a rocket) [2].  But only one plane routinely flies to the edge of space and back, and it’s actually a relic from the 1950’s.   Although each plane is periodically stripped completely, x-rayed, and refurbished, the design has remained essentially the same over all these decades.  Why? Because it works. END_OF_DOCUMENT_TOKEN_TO_BE_REPLACED

Being a writer, I take language: the meanings and flow of words, seriously.  Words have power and precise meanings.  Effective communication means using words properly.  Throwing together a mish-mash of terms or making words up by splicing improper suffixes onto a good word breeds confusion.  Even newscasters are trying to sound hyper-intelligent by tossing out big words spliced together using parts of two legitimate words.

But common terms are abused as well.  Just now I was asked if my truck runs on diesel gasoline.  This was not an either-or question, it was a yes-no question.  Diesel fuel and gasoline are two different things.  Using them together caused a train crash in the switch yard of my brain and boggled me for a moment.

An acquaintance often used the word “empowerized”, a melding of empowered and energized to convey vitality and excitement.  But it sent a little shiver up my neck every time I heard it.

A few other language laughables I can think of include:

I could go on, but you get the idea.  And this doesn’t even get into words like irregardless.  Regardless means without regard.  Sticking the “ir” on the front makes it mean “not without regard” which is the opposite of what they’re trying to say.  There are SO many of these in common use today that I could go on all day.  But I’ll spare you that.

Now to be fair, the English language that we have today was made up by sticking bits of words from many other languages together.  And it evolves as each generation rises up and squishes it into their own mold of preferred expression.  So I may have no right at all to complain about younger people making up or twisting words into new meanings.  Maybe I’m just getting old and cranky.  Maybe I should just suckupicate and deal with it.

It is the assigned task of every true Christian: followers of Jesus, to diligently study the Word of God.  Listening to a sermon on Sunday mornings is not “studying” the Word.  This may prove enlightening, but God desires to speak directly to each of His children and He does that through Bible study.

Be diligent to present yourself approved to God, a worker who does not need to be ashamed, rightly dividing the word of truth. (NKJV)

Yesterday I spent a good portion of the day doing battle with a contingent of honeysuckle and bramble vines that had invaded a stretch of fencing I was trying to remove from a now little-used patch of our property.

Many of the vines were inexperienced, but what they lacked in tenacity they made up for in numbers.  And their base was protected by a thick layer of dead leaves blown against the fencing.  I cautiously probed with pruners (for there was a threat of Copperheads lurking there), slicing and snipping the myriad vinelings to free the bottom of the fencing.

Some vines were more experienced and tenacious, but with a proper concentration of force my pruners handled them.  A few were battle-hardened veterans.  These sent me trekking across the property to bring in my heavy loppers.  Even these stalwart defenders fell when such powerful weaponry was brought to bear.

In the end, though scratched bloody and soaked with sweat (which stings in those injuries) I victoriously dragged that length of fencing out of the battlefield where I could clean as much of the plant life from it as possible and roll it up for use elsewhere.  As I put away my implements of war I was weary but satisfied in a battle well fought – and won.

This morning I find that insidious agents dispatched by the enemy Bureau of Pollination have infiltrated my sinuses and are engaged in combat with my mucous linings.  In addition my upper legs, hips, and lower back are staging a revolt for the abuses they suffered yesterday.  But, such are the wages of warfare.  I shall placate my rebels with drugs until they forget the abuses they suffered and resume their normal functions.

The battle was won.  The way is open to bringing my riding mower in to quell the attempted overthrow of that area by the indigenous species, which are attempting to re-take that sector of property for their own.  That must not happen, shall not happen.  That sector will remain under my control.  I must see to that for the good of the empire!

This poem by Rudyard Kipling was what the pastor at the church we attended this morning opened with.  I’ve heard the first part re-done many ways, but I’d forgotten what an excellent poem it is.  Enjoy!

If you can keep your head when all about you
Are losing theirs and blaming it on you,
If you can trust yourself when all men doubt you,
But make allowance for their doubting too;

If you can wait and not be tired by waiting,
Or being lied about, don’t deal in lies,
Or being hated, don’t give way to hating,
And yet don’t look too good, nor talk too wise: END_OF_DOCUMENT_TOKEN_TO_BE_REPLACED

The pastor of the church my wife and I attend passed away this afternoon.  This possibility was a prime topic of discussion at this morning’s services.  There were many teary eyes.  But as we contemplate the death of a Christian brother or sister, are tears appropriate?

Why Do We Grieve? 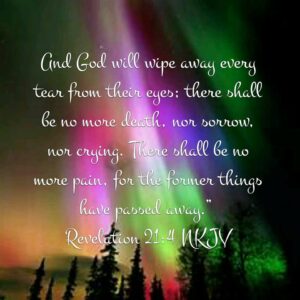 Grief is a natural reaction anytime someone close to us passes away.  We grieve mostly because we miss that person.  Depending on the relationship between us, that feeling of loss can have devastating results in our life — if we let it.

Generally speaking, we grieve because *we* feel loss; making the feelings self-centered.  There are a myriad of circumstances that make that statement less fitting: END_OF_DOCUMENT_TOKEN_TO_BE_REPLACED