It’s Saturday.  Marie is home.  She can help keep an eye on the inside dogs, so I can work outside more than I can during the week.  I’ve accomplished several things, but the big task for today was to cart all the lumber on this lumber rack: (and if you can’t tell, that pile goes all the way up to the rafters),

and move it to some place other than where it is: out of that building.  That means putting it in some other building where it will still be in my way, but in a different place. 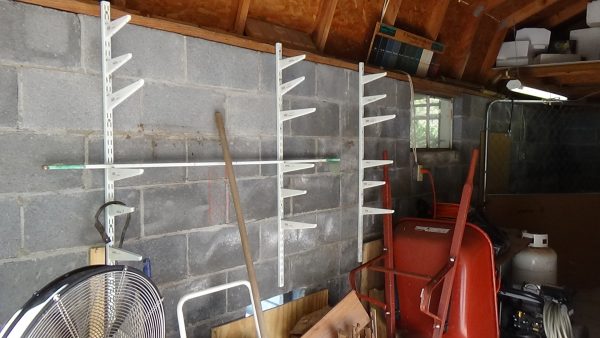 Once I remove a few screws the racks will come down and the whole wall will be clear.

I also went ahead and laid out my divider walls, which is not as simple as one would think.

Originally I planned to make three inside kennels; each 8 feet wide to match the three outside kennels.  Simple.  We even cut the doorways in, on that thought.  But then I decided I didn’t need that much space in the inside kennels.  Too much room encourages dogs to poop in a far corner and live with it.  Less space means less temptation to do that.

I would like to have an inside space as an ICU room for recent surgery patients and dogs going through heart worm treatment.  That means a smaller space: 4′ x 4′ is enough.  I’ll take that dog outside on a leash.

That window you see messes up the idea of just dividing the remaining space into three equal rooms.  And I need to keep the doors in mind, leaving room on either side of the doors to mount slide hardware for vertically sliding doors to shut the dog in or out (and keep the cold out at night).

With the wall clear I did some laying out on the wall with an orange lumber marking crayon.  What works best is on the left, the 4 x 4 ICU, with the wall just to the left of the first doorway (currently being blocked with a piece of plywood to keep Siri where she belongs since the roll-up door is open).  Kennel #1 and Kennel #2 are 5 feet long (by 4 feet deep)  and kennel #3 is 6 feet 8 inches long.  This one could be used as a double should I have two dogs who cohabitate well.  Or one really big dog.

The walls between kennels will be 4″ wide concrete block, 6 feet high and I will cover the tops of the kennels with fencing like I did outside so dogs can’t climb out.  But not until I get the insulation in and drywall ceiling up and painted.  Each kennel will have a chain link front panel with a door (gate) in it so I can access the space from inside the kennel building.  Once the building is emptied of lumber I can use that big empty space for training and storage.

I’ll remove the roll-up garage door and fill in the opening with a combination of block wall (where the ICU  kennel is) and wood-frame wall (out in the main room where dogs won’t be likely to be digging at it or chewing on it).  Know anyone who wants a garage door with electric opener?  No remote, though.

I will seal the block walls and paint them some bright color.  I would like to use epoxy garage floor sealer to ease keeping the floors clean.  Since I don’t have a floor drain, interior clean-up will be done with a mop and bucket.

Last night I ordered all the chain link connectors, corners, clips, clamps, bolts, ties, and such from an on-line wholesaler I’ve used twice before and been happy with.  Next week I will go to Home Depot to get the top rails, tension bars, fence fabric, and the 36 cement blocks I need for the first divider wall.  None of that stuff can be economically shipped to me.  I hope it all fits in my truck!

Then I will try my hand as a block-layer.  A first for me, but … how hard can it be, right?

Why I Do Not Own A Smart Phone