Skip to content
Marie and I were at the Wags-to-Wiggles store (over towards Gatlinburg) for our weekly check-in.  A vehicle pulled up out front and a young woman in a bathing suit got out, ran in, and said; “Can you help us, PLEASE?”
The short version is: they found a parakeet wandering the parking lot at a McDonald’s in Gatlinburg, it is very friendly and obviously someone’s pet.  They called the local Police, Animal Control, Sevier County’s animal shelter, all said they could not help.  These folks were from Georgia, here on vacation, and on their way to go white water rafting.  They can’t keep the bird and don’t know how to help find it’s owner. 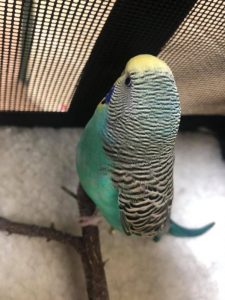 Gwen, the store manager, gave us a wicker picnic basket from store stock to put the cute lil feller in.
She also called Stacy, the Manager at the Friends Animal Shelter in Newport, to see if she could take it.  Stacy asked, “Is it orange and green?”
“Yes!”
“I have a lost bird report on him.  His name is Arty.  His owner’s number is …”
“Gwen called the owner.  She lives in West Tennessee and lost Arty 17 days ago while on vacation in Gatlinburg.  She put up fliers, and notified shelters, but had to go back home.  She was coming back out next Monday to search some more.  She has a good friend who lives in Newport who can care for him until she arrives.
We’re all boggling!  What are the odds?
So Marie and I took the bird-in-a-basket back to Newport and into the shelter where The Friend was to meet us.  We were especially careful to not let “Arty” out of the basket because there are several shelter cats who wander the halls and sleep on beds or chairs.  Supposedly they are on vermin patrol, but I never see them hunting.  I think they’re scamming the shelter.
When the friend showed up she was ecstatic that Arty had been found, but asked to see him before she took the basket.  She peeked inside, “Oh … that is NOT Arty.  That’s a parakeet.”
“Yeah …”
“Arty is more of a parrot – much bigger.”
We all glared at Stacy.  “What?  I didn’t know?  We don’t even DO birds here, I put up the flier as a courtesy.”
The friend left to give Arty’s mom the bad news.  A shelter volunteer set Not-arty up in a cat carrier with some water and bird seed (the finders bought him a small bag of seed) and Stacy began calling people who might have birds, or know someone who has birds, or might want to have a bird.
Turns out Stacy hates birds … ever since she watched Hitchcock’s The Birds, she’s had a deep fear of birds and wants nothing to do with them.
Well … it was almost a wonderful story to tell.