The above results are from BibleGateway.org,  King James Version (KJV)  Public Domain

The problem comes from applying a modern conception to an ancient fact.  In modern translations, most have changed “unicorn” to wild goat or wild ox to get away from the foible inherent with the word unicorn.  But the actual, living unicorn was also recorded in non-biblical texts and we can use those to support the truth of the Bible.  One such was the Merriam Webster dictionary.  The 1828 edition contained this reference: 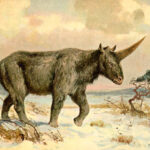 U’NICORN, noun [Latin unicornis; unus, one, and cornu, horn.]
1. an animal with one horn; the monoceros. this name is often applied to the rhinoceros.
2. The sea unicorn is a fish of the whale kind, called narwal, remarkable for a horn growing out at his nose.

The earliest extra biblical writings to mention Unicorns were the writings of a Greek writer: Ctesias in the late 5th century BCE.  He described a strong animal with a white body, a red head, and a single horn protruding from its head.  450 years later, Roman historian Pliny the Elder wrote of single horned beast that was so strong and so wild that it could not be captured alive.

So, when the King James Bible talks about a Unicorn, it’s not the whimsical white horse we think of today, but an early rhinoceros.  That kind of pulls the chair out from under that argument about the Bible being a book of fables, doesn’t it?

The Airplane That Flies At the Edge of Space