It is purported that a young Albert Einstein once challenged a teacher, saying that darkness does not exist, in and of itself. Darkness is in fact the absence of light. 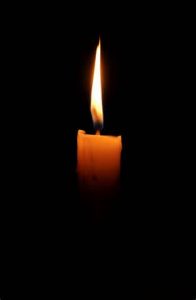 I once took a cave tour. I don’t recall if this tour was Merrimack Caverns, Carlsbad Cavern or Mammoth Cave: I’ve toured them all. At one point in the tour the group entered a large chamber. We were taken to the very center of the chamber and warned not to wander off. And they turned out the lights.

We were forewarned, of course so those who felt uncomfortable with this could be kept elsewhere, for the experience was … disturbing. I thought I knew darkness. I was wrong. The darkness in that cave was so complete that it became palpable. We were encouraged to hold hands before the lights went out, I knew why once it was done. The sense of isolation was overwhelming. I could hear the gasps and whispers of others in the group, and I was holding hands with other tourists, otherwise the sense of utter aloneness was breathtaking. I could not imagine wandering around alone in such darkness trying to find an exit. We were told to let go with one hand and bring it, slowly, up to our faces: can we see that hand? No, I could not. Even when it bumped into my nose, I could not see that hand. The darkness was so complete. I also noticed that once we were no longer holding hands, and I had no visual cues, my sense of balance was suspect: I could not be certain that I wasn’t toppling over.

They brought the lights back on slowly. One bulb in the distance: a small orange spark, but clearly visible even from where we were. Then a few where we stood. We could again see our fellow spelunkers and the floor we stood upon in a bubble of dim light amidst a crushing blackness. And a few more, farther out. And slowly they drove back the inky darkness until light was glinting off stalactites and walls and we were again inside a cavern. It was indeed a dramatic demonstration.

While that darkness felt palpable, crushing, almost alive when the lights were off, it was easily driven off – dissipated — by a few dim light bulbs. Can we reverse that? We can create light amid the darkness, can we create darkness amid the light?

When a single source of light is blocked by a solid object, it creates a shadow: a patch of less-light, but not absolute darkness. We could build a box, sealed tightly and having thick walls so that even sitting in the bright sunshine it would be dark inside. But the dark is not amidst the light: it has been separated, created by excluding light. Can we create a bubble of darkness amid the light as we created light amid the darkness in the cave?

A black hole? A black hole is a celestial object, probably a collapsed star, so dense that its intense gravity field prevents even light from escaping it. If we created a microscopic black hole above a sunny field, would we not see a sphere of absolute darkness where the very light of the air was being sucked in? Possibly. But in addition to sucking in the light beams around it, it would also be sucking in atmosphere, grass, dirt, rock … indeed the planet itself as it added these to its mass and grew in size and strength. A dangerous experiment to be sure!

And would it have accomplished our stated goal? No. Once again we are creating darkness by controlling, excluding light. Can we create darkness without manipulating light? I don’t think so. Darkness does not exist as a property or construct of its own: darkness is an absence of light. Similarly, cold is an absence of heat. Vacuum is an absence of atmosphere. That’s quite a theory for a boy to throw at his school master!

But he wasn’t done. He used this example to state that just as darkness is not an element in itself, neither is evil. Evil is an absence of goodness.

The Bible tells us that all good things come from God. Where people exclude God from a society, goodness diminishes and “evil” grows.

Of course, what is “evil” and what is “good” depends on one’s mind-set. In my view, Genghis Khan, Napoleon, Hitler, and radical Islam all represent evil because of their hatred and murderous ways. Islamists consider me evil because I worship Jesus, not Allah. Their Qur’an dictates that they kill all non-believers so all the world will become Muslim. Jesus instructed his followers that we are to go into all the world and make disciples. It does not say we are to kill those who refuse, but the goal is similar: spreading our image of “good”.

From my viewpoint, there is much evil in the world and most of it comes from greed and a lust for power that resolutely denies the existence of God and the promises of Jesus. It works at all levels, not just in governments and religious leadership. When greed and lust push love out, evil moves in like snuffing candles in a cave. The darkness becomes pervasive not because it’s more powerful, but because there is less light to push it back.

One day, all the remaining candles of love will be removed from this world. On that day, and for 7 years afterward, moral darkness will become pervasive. The planet itself will be racked. I would not want to be living here then!

But afterward, the light will return with a vengeance and moral darkness will be dispelled. Then there will be no doubt as to what was true and what was the fiction of man.

Some say, “What if you’re wrong? What if you are subjugating yourself to a fantasy?” Well, then I may have missed out on a few worldly pleasures. But what if I’m right and you’re wrong?

7 thoughts on “Does Darkness Exist?”

A Snooze Button for My Brain

A Quick Start Card for the Bible