There was a woman who had a son named Timmy.  When Timmy was in kindergarten she would walk him to school, a few blocks away.

The following year her son said, “Mom, when I start first grade, I want to walk to school on my own.  I’m a big boy now, you don’t need to walk me to school.”  She agreed, but was worried about leaving him on his own so young. 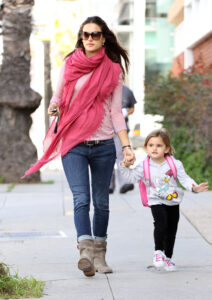 She had a friend who lived two doors down who was going to be walking her daughter to Kindergarten that year and the woman asked her friend if they would time their walks to and from school to allow Timmy to get out front by a half block or so and just sort of keep an eye on him without letting him know they were keeping an eye on him.  Her friend said she would.

About two months into the school year Timmy was telling his Mom about his day and mentioned that Grace and Marcy had stopped to pet a puppy in a yard they passed, so he came on home on his own.

His Mom asked, “Who are Grace and Marcy?”

The boy answered, “The lady and little girl that you’ve had following me this year.”

The mom was confused because those were not the names of her friend and the woman’s daughter.

“So, you’ve talked to them?  Did they tell you those were their names?”

”No, but I figured it out because every night when we say our prayers you always end by saying “May Grace and Marcy follow Timmy wherever he goes.”

How to Be Happy: According to Jesus

Finding Rest for Your Soul