“Marketers will kill everything good.” – @GaryVee

Pop-up ads (in case you live in a cave somewhere) are those panels that “pop up” over the content you are trying to read on many web sites. Sometimes they tout products or services for sale, but more often they ask you to join a mailing list. They are the most annoying form of advertising I have encountered. And … they are very effective.

In mid-August 2016, Google discussed how intrusive pop-ups are to users. Web users complain about them. Many of us install pop-up blocker plug-ins in our browsers. According to Google, “intrusive interstitials (pop-ups) frustrate users, and provide a poorer experience than when content is readily available.” Google says, “As of January 10, 2017, pages where content isn’t easily accessible to a user on the transition from the mobile search results won’t rank as highly.” Translation: if a user goes to your mobile site and the first thing they see is a pop-up, your site’s search rankings crash and burn.

But this has marketing departments around the globe scrambling to find another way to shove their message in front of you.

History of the Pop-up

According to www.popupdoomsday.com, pop up ads emerged on the blossoming internet scene sometime in 1997, all thanks to Ethan Zuckerman. Zuckerman, a web developer who, at the time, worked for the webpage hosting site Tripod.com.

When trying to solve a client advertising issue, Zuckerman created what would become one of the most hated revenue driving marketing tool, pop-up ads.

Prior to pop-ups, advertisements were bought as banners that lived on various sites — this random-chance advertising led Zuckerman’s client, a major car company, to freaking out when they realized that they’d bought a banner advertisement on a pornographic site (oops).

Clearly the car company didn’t want their brand associated with sexual content. So, to combat misassociation, Zuckerman created the code that would launch ads in separate windows. This was a way to associate a brand’s ad with their site without putting it directly on the page. For a while, this strategy worked brilliantly.

Banner ads were passive and by the late 1990s their click-through rate had dropped between 1 and 2 percent. However, pop-up ads were pulling in 3 to 5 percent of site users. This was a drastic jump in comparison, so what happened to the shining halo that pop-ups brandished for years?

Brendan Eich, inventor of Javascript took the shining halo and made it blink, make noise, and brought it to life. Javascript allowed pop-ups to have room for manipulation instead of stagnant formatting. This presented annoying instances of windows opening on their own, becoming difficult to close, and confusing site users.

With the evolution of the internet and marketing strategies, there’s a clear need for less intrusive advertisements and user friendliness across varying platforms. In a world where impatience, speed, and shortened attention spans dictate marketing strategies, if history has taught us one thing, it’s this: advertising needs to evolve.

Companies that rely on these pop-ups for income will be especially impacted by this change. They’re the ones who, as Emma Hinchliffe of Mashable points out, need that ad revenue to survive.

You may have noted that Google states it is punishing “mobile” sites not all web sites. That probably means that sites optimized for display on a desktop or laptop will still be able to use pop-ups. But that makes sense because 51% percent of digital media is consumed via mobile, compared to 42% on desktop and that percentile shift will continue to grow as people abandon desktop computers for their smart phones.

Andrews suggests that, if they haven’t done so already, marketers solve for mobile SEO first. The pain that comes with changing a revenue model is inevitable, but shorter-term — and businesses that rely on advertiser dollars, he says, should figure out ways “to make money that don’t totally disrupt the mobile user experience.”

The marketing mavens are trying to come up with a new way to hack their messages into your browsing experience, and it is not clear yet how that will be accomplished. But it is clear that it will have to be something on-page again. Their best message at the moment is to write content attractive to your target audience and embed advertising in or near that content.

Once again they are doing psychological analysis of the target audiences. Web sites like www.Smartinsights.com offer graphical analysis of much of this data. This chart on Gen X vs Millennials is interesting. 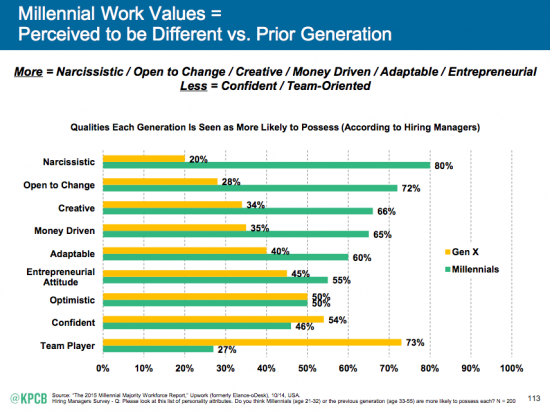 As you can see, advertisers are going to need a whole new slant on content that will attract younger consumers from what has appealed to older generations. I suppose that means this stuff will be of no interest to fossilized dinosaurs like me who still browse on a laptop.

Being Happy in Unhappy Times