Those who work within an industry tend to develop a jargon of their own to express ideas quickly.  Sometimes these are scientific terms, sometimes they are slang used as short hand, sometimes they are acronyms spoken out as words.  As long as these folks are in their own element, communication is fine.  Put a few of them in a crowd of the non-initiated, and most of the on-lookers end up bewildered.  “What language are they speaking?!”

This can happen with motor heads, computer geeks, programmers, sports nuts, and medical professionals.  Here is a fun look at what may be the very best example of confusing people with jargon.  Below the video is the explanation of who this fellow is and how this short film came about.

This is the first time Turbo Encabulator was recorded with picture. It was shot in the late 70’s at Regan Studios in Detroit on 16mm film. The narrator and writer is Bud Haggert. He was the top voice-over talent on technical films.

He wrote the script because he rarely understood the technical copy he was asked to read and felt he shouldn’t be alone. The crew had just finished a production for GMC Trucks and Bud asked, since this was the perfect setting, could the crew film his Turbo Encabulator script.

He was using an audio prompter referred to as “the ear”. He was actually the pioneer of the ear. He was to deliver a live speech without a prompter. After struggling in his hotel room trying to commit it to memory he went to plan B. He recorded it to a large Wollensak reel to reel recorder and placed it in the bottom of the podium. With a wired earplug he used it for the speech and the “ear” was invented. Today every on-camera spokesperson uses a variation of Bud’s innovation.

Dave Rondot was the director and John Choate was the DP on this production. Hat’s off to Bud Haggert: a true talent.

Be Aware of Jargon in Your Writing

Whether you write fiction or non-fiction, you will want to be aware of the jargon you use.  Perhaps you come from a law enforcement back ground and now write murder mysteries, so you use cop-speak in your novels.  Do your readers understand it?  To be sure, work in subtle explanations of the less fathomable terms to be sure you don’t push your readers away with murky language.

Jargon always lends an air of authenticity, but make sure your readers can follow along or they’ll lay you aside.

If you’re in politics, that is another matter entirely! 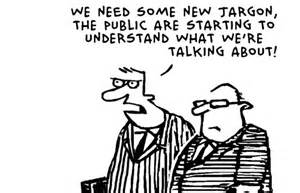 Being Thankful Isn’t Just for Thanksgiving