Our Board of Directors approved the purchase of three Kennel Clad guillotine kennel doors.  You’ll know why they’re called that when you see the video.  I ordered them and they arrived quickly.  I spent my afternoon today installing the first one.  It went into Rebel’s bedroom.

I wanted Rebel to go out into his outer room so I could open his inner door and work less encumbered by having to open and close the door every time I went in or out.  But Rebel was having none of that. 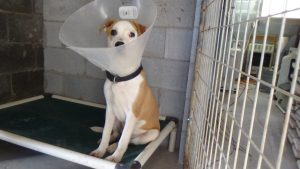 However, he perched himself on his bed and lounged there watching me work.  He never got in my way and never tried to squeeze out the door with me.  He watched intently as I worked as though it was the most fascinating thing he’d ever seen.  He was SO adorable!

There were several challenges to overcome.  The biggest was the fact that the walls I’m mounting the door slides on are not even close to be being flat.  Warping the rails causes the door to bind.  I got around that by shimming the rails where needed.  Fortunately, as a former furniture maker, I have a fair stock of ultra thin pieces of wood laying around to stack up for the perfect shims.

It took me a couple of hours to unpack the boxes, decide what tools I needed, get everything staged, and then install the first door.  But the end result is satisfactory.  I should probably go buy some sheet metal to cut up for shims instead of using wood shims: wood will rot.

The final door has been installed and is working properly.
Check out my Walk Through video for the result.