As a kid, the highlight of my week was laying on the floor of our living room and watching the weekly episode of Lost in Space.  I thought that was the greatest show ever made!  Many years later I revisited a few of those episodes and came away wondering, “What was I *thinking*?!”  By modern standards the classic version left a lot to be desired.  Still, I remember it fondly as a major part of my childhood as my love for science fiction bloomed. 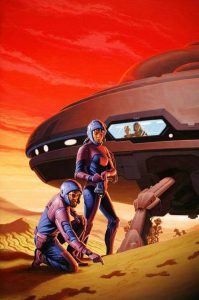 In 1998 a remake was released as a movie which I enjoy much more.  There is a rumor floating around that NetFlix is doing another re-make: but all I can find is the artwork.  Although this appears to be the cover of a book by Nancy Krulik, so … someone may be pulling my leg.

Today I came across a never-aired pilot for the original Lost in Space TV show.

This abandoned Lost in Space TV pilot does NOT have the characters of Dr. Zachary Smith (Johnathan Harris) (an improvement in my opinion) or the Robot (I miss him), and the spaceship is called the Gemini 12 not the Jupiter 2.  Also the music from the 1951 movie The Day The Earth Stood Still by Bernard Hermann is used.

A synopsis of the plot is listed below the video in case you want to watch it without spoilers.  It’s 50 minutes long and is the complete video.

In the year 1997, the Robinson family leaves Earth in the Gemini 12 space ship and sets out on a journey to be the first humans to colonize Alpha Centauri. Disaster strikes when their ship encounters a meteor storm, veers off course and crash lands on an alien planet. By December 2001, after a delayed revival from suspended animation, the family has settled in over a six month period and made the planet their home, but a severe winter is coming and they must journey south. Traveling in their all-terrain “chariot,” the family encounters fearsome cyclops monsters, survives a stormy sea, and explores the cave of an ancient civilization. Eventually they find a tropical region and set up camp, but unbeknownst to them they are being observed by a pair of humanoid aliens.

Praying For Our Leaders