Skip to content
Today I took Mom to a doctor’s appointment in the Big City.  This building has 2 handicapped parking spaces just outside the main door to the parking lot – which is nice.  But they are not sized like handicapped spots: they’re just regular parking places with the blue and white wheelchair emblem painted on.  The one next to the curb was occupied, the other one was available.  I nosed in but stopped where I could get Mom’s door open and her wheelchair in place to get her out, then I’d pull in, shut it off, and lock it up.
As she was lifting herself from car to wheelchair the window slid down (power windows) and she mentioned it in case I’m blind or something (hey, it happens).  I raised the window and closed the door. 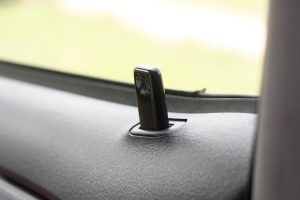 I rolled her up onto the patio outside the entryway and went to pull the car the rest of the way into the parking slot — but I found the doors locked.  And the keys are inside.  And the engine is running.  And I’m sort of blocking the driveway.  Oh Bother!
There was another couple standing there, about my age, and he takes an interest in my plight, offering a couple of useless suggestions (but he’s trying to be helpful, you know?).  So I said, “I guess no one will be able to steal it, I’m going to get Mom thought the doors so she can make her appointment.”  She’s quite adept at getting around in her chair; she does it all the time.  Big heavy doors can be a problem, though.  So I got her to the elevator lobby and went back out.
I made the call to AAA, gave the gal (who said her name was Carmen) all the information and she said a local automotive lock and key shop would be responding within 45 minutes.  She did tell them that the engine is running and I’m blocking a driveway, so hopefully they will slide me up their priority list.  There will be no charge, this is fully covered under our membership.  Yay Triple A!
No more than 5 minutes later a small white car with AAA Emergency Services on the side pulled in and found a parking space.  A young fella got out, used an inflatable bladder to open a gap between window seal and glass, then poked a long, oddly shaped, orange, steel rod through the window gap he created and fished around until he hit the unlock button and was able to open the door.  By this time a small crowd had gathered to watch (including the fellow from before and his wife).  A cheer went up.
I asked the young man how he got here so fast.  He said he was actually on his way home when the call went out and he was just a couple of blocks from here, so he ducked in to take the call.
I parked the car (making sure I had my keys).  I noticed that the fella I’d been chatting with was sitting in the car parked next to my drivers side.  I waved and said “Thanks for keeping me company.”  He waved and smiled.
I didn’t have long to wait before Mom came trundling out to the check-out desk to do what they do and we left.
As we were getting into the elevator a elderly couple stepped in as well.  I’m 60 years old and naturally I do not consider that to be elderly, so these two had to be 110 at least.  Both quite small (even shorter than my 5’4”), deeply tanned and charmingly wrinkled.  She was in a yellow dress and he was in khaki pants and a crisply pressed lavender dress shirt.  And a straw hat.  Both were the very image of sweet country folk.  They were very polite and amiable.  We all headed for the three doors that must be traversed to get out to the parking lot.  The elderly lady scooted out front with a “Let me get this for you” to my Mom.  But when she twisted the lever handle, nothing happened.
The door was locked!
I tried the door too, but it was definitely locked.  There was one other door that went out to the street along the front of the building.  “I’ll go out this way” I offered, pointing to the street door, “go around the building and come in the other way to open this door.”  They all agreed this was a good plan.
Fortunately this building was not the size of the Pentagon and I was able to circumnavigate (semi-circumnavigate) the building and enter the parking lot door, come through the first two doors (and their associated spaces) and get to the door that was stopping them.  It had a simple twist-lock button that popped right out when I turned the lever and opened the door.
Yay!
We all went through the rest of the building together and out the exterior door.  The big white van that had been occupying the other handicapped spot was gone and there was plenty of room to maneuver Moms chair.  The elderly couple walked to the car parked on the other side of mine and opened the passenger side doors while I got my passenger door open, Mom in her seat, her wheel chair folded, and stowed in the back.
As I came around to get in the driver’s door I heard the elderly lady tell the driver of their car – the fellow I had been chatting with while waiting for AAA — “This nice young man helped us get out.  There was a locked door and we couldn’t get out.”  The driver smiled at me and said, “Well … this is your day for locks, isn’t it?”
That it was!