It rained during the night last and everything is wet.  Too wet to mow, but because it has been dry for most of last week I do not (for a change) have to worry about gnu’s and wildebeests moving if I don’t mow right away.

Last night when I took Bristol’s dinner out to him, I saw a medium sized rat crawl out through the skirting under my workshop and scamper into a drain line that leads up behind the garage – which is right on the edge of the forest.  It is getting to be that season, and I don’t want rats taking up residence in my workshop, so I patched the hole it used and put out some fresh D-con packets in places where vermin may find them but dogs won’t. 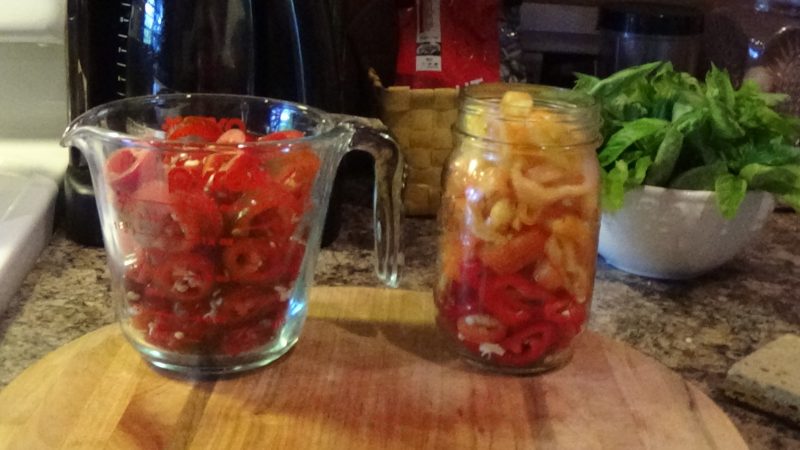 Among my chores this morning are to can a pint of red jalapenos and a pint of banana peppers. These can be water bathed, so I will use our stock pot to whip them up. It holds up to 4 pint jars. More than that and I need to drag out the big pressure canner, even if I’m water-bathing, because it’s big enough to hold up to 10 pints. It’s also heavy and takes a lot of water to fill it, so I only use that for large batches of water-bathed goods — and pressure canning, of course. But that only takes a little water. 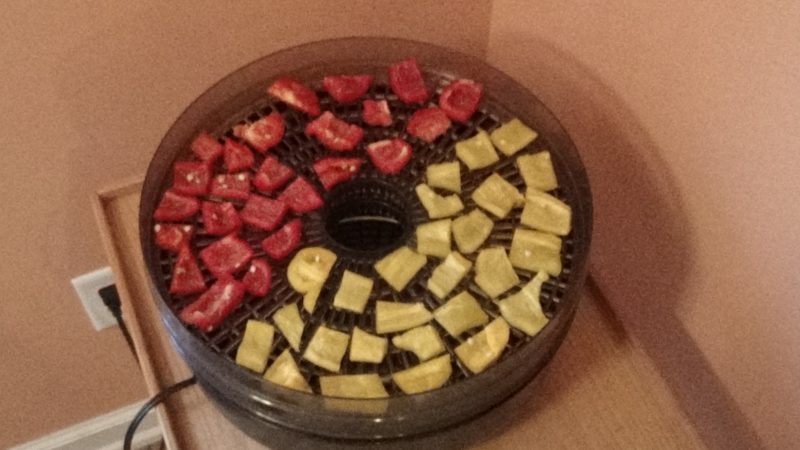 I’m also dehydrating a tray of sweet peppers. When dried, these can be kept in a jar on the counter top and used to make soups and stews. When simmered in the soup stock they re-hydrate and become pepper chunks again. These store compactly and don’t need special conditions like frozen or canned. Even canned goods require electricity for us to store them properly because we do not have a basement or root cellar.  I keep the canned goods on shelves in my office which is air-conditioned to keep it reasonably cool.  If canned goods get too warm, they can lose the vacuum seal and become contaminated and the warmth promotes bacterial growth.

And if I freeze or can peppers I have to blister them and peel the skins off before cutting them up or the skins get tough. The skins are not an issue on the thin rings of canned jalapenos and sandwich peppers, but larger chunks get tough and chewey if not skinned first.

I’m also dicing up a few tomatoes that have been sitting too long and are getting ugly. These go in a jar in the fridge. If they don’t get used in cooking this week, I’ll puree them for use in my next batch of tomato sauce.

These chores save us some money by reducing our dependence on the produce department of Food City. When done here I’ll go on to other things that will earn some money. Cochise says he’s going to “help” me with that today and has ousted Blondie from her usual spot next to my chair.

And now, for some high-brow, literary entertainment: