In Luke chapter 15 Jesus tells three parables involving the loss and recovery of precious items.  One of those is the story we know as the parable of the prodigal son.  Before we begin it is important to understand something about servants in the Jewish household in the time of Jesus.

There were three types of servants employed by Jewish estates.  The first was a bondservant: which was treated like a family member, they ate with the family, dressed well, and were given responsibility to conduct the affairs of the estate.  Bondservants hired household servants, who also lived in the home, but ate separately and were not treated as family members.  Household servants  were the cooks, maids, personal attendants, gardeners, etc for the family; doing the bulk of the day-to-day work of the estate.   Hired servants or hired men, were per-Diem workers brought in on an as-needed basis and paid their days wages at the end of each day.   Typically a full-day worker would be fed at mid-day.  These workers helped at harvest time or to accomplish some major task.  They were disposable workers.

Although most Bible translations do not use the word “prodigal” (which means “reckless or wild spending”) this title has become common for this parable.  Whether we refer to him as the prodigal son or the lost son, it is unfortunate that we look to the younger son as being the topic of this story; for indeed Jesus intended it to be about the gracious and forgiving father.  He was using the parable to illustrate why He was associating and eating with sinners, a practice that incensed the Pharisees.

A rich man had two sons.  The younger son demanded his share of the family wealth.  This was an audacious demand!  He was, in effect, telling his father “I wish you were dead”, because family fortunes were not normally distributed until the father was dead or close to it.  This one was very much alive.  This had to hurt the father.

Some Bible commentators point out the fact that the father, by complying with the younger son’s demand, placed himself in the category of being “prodigal” himself.  By complying with the demand — and we can assume that the father knew his younger son was not a responsible, clear-thinking young man — he too entered into “reckless spending”.  But, he loved his sons too much to refuse.

The father divided his estate.  By Jewish tradition, the eldest son always got a double portion of the estate.  With just two sons, the elder would get two-thirds, the younger one-third.

The younger son then gathered together his possessions and went off to a pagan area to spend his newfound wealth in riotous living.  No doubt, this young man willing to spend freely on partying had many friends in his new home — until the money ran out.

Destitute, the prodigal son had to hire himself out to a pig farmer.  Bear in mind, the young man is a Hebrew – and Hebrews considered pigs to be unclean beasts.  Here he was feeding pigs in exchange for accommodations.  Apparently his wages did not include many meals, for he longed to fill his belly with the pods or husks he was feeding to the pigs.

When the young man realizes that the father he loathed so much as to demand his share of the family wealth and ran away from treated even his hired men better than he was being treated, he resolved to go back home.  Assuming he would not receive a warm welcome, he decided to humble himself (a major step for him, for sure) and ask to be taken back as a hired hand. 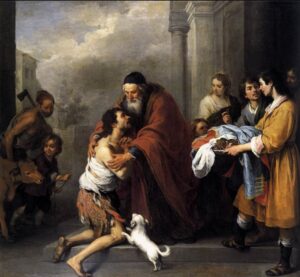 The main point of the story is the fathers reaction to the son’s return.  Notice that it says the father saw the son while he was still a long way off.  That indicates that the father was looking for the son.  He was hoping for or anticipating the return.  Note also that the father ran to his son.  Jewish men did not normally run: it was undignified.   To further show his emotional state, the father fell on the son’s neck, hugging him and showering him with kisses (the word used here is kataphileo: an emotional display, not phileo: a kiss of greeting).  The father ordered the best robe be brought out.  Not a clean tunic, but the best robe: a clear indication of family association.  Servants typically did not wear shoes, family member always did.  The sandals he ordered to be brought also spoke to family ties.  The clincher is the ring.  This was not some decorative piece of jewelry.

A signet ring was worn by those who were empowered to conduct business on behalf of the estate.  When a deal was made, the contract was signed by dripping wax on the bottom and pressing the signet ring, which was etched with the family emblem, into the wax to make an impression.  This was called “sealing the deal”.

Many preachers stop preaching after verse 24: the prodigal son has returned, he has been restored as family and a major party is in progress to celebrate.  This illustrates Jesus’ point that when a sinner “comes home” heaven rejoices.  But, there is more.

The elder son discovers that his wayward brother has returned and is petulant.  The father comes out to persuade him.  The elder son gripes that he has slaved away for all his life and never received any reward, but “this son of yours” squanders much of the family wealth and the fatted calf is killed for him.

It is generally thought that the elder son represents the stiff-necked, pride filled Pharisees who have turned their service for God into loveless slavery.  They resented Jesus paying attention to the “sinners” of the community, saying that if they repented and “came home” they would be forgiven and accepted into God’s family.

One point that is generally dodged by preachers and Bible commentators alike is the father’s statement to the elder son, “My son, you are always with me and all that I have is yours.”  He goes on to state that they had to celebrate because the younger son was “dead” to the family, and is now alive again.  Admittedly, this statement of “was dead and is alive again” is the major point:  God forgives those who will repent.  I don’t want to turn a parable into doctrine, but that one statement tucked in there has always fascinated me.  Is it limited to His fictional story, or does it have a deeper meaning?

In the context of the story, it makes sense that the prodigal son has squandered his share of the family wealth and will get no more.  It raises the question of what will become of the younger son when the father passes on and the elder son takes over.  But, such considerations run contrary to the point of the parable.  Firstly, if the father represents God, God is not going to die.  Secondly if the elder son represents the Pharisees, they would not be left to take over God’s kingdom.  So that line of reasoning fizzles quickly.

The story is about God’s love for all humanity and his willingness to forgive even the most rebellious of us if we will humble ourselves and repent of our foolishness.  Are you living as a prodigal son or daughter?  Come home to the Father and enjoy His forgiveness!

Counting the Cost of Discipleship