Marie and I rarely eat out.  By rarely I mean almost never.  There’s no reason for it.  We have a fully functional kitchen that is well stocked with foodstuffs.  Marie is an excellent cook and enjoys practicing that art.  Most of the time.  Sometimes she’d rather not.  I am … capable, in the kitchen as well.  I take a turn at the cooking several times a week and neither of us has died.

One occasion when we do eat out is Christmas eve.  This is an annual celebration.  We’re celebrating the anniversary of my proposal of marriage to Marie and her acceptance (she did not need to ponder the proposal for long).

The original event occurred at the Pere Marquette Lodge  near Grafton Illinois.  It’s actually in a state park of the same name.  There is a wonderful, rustic dining hall there, and that’s where I popped the question and bribed her with a ring.

While we lived in the area, we would return to Pere Marquette every year on Christmas eve to celebrate that event.  When we moved away and could no longer get to the actual scene of the event, we found similar locations to stand-in for that lodge on this annual celebration.

Recently, we’ve been going to The Pottery House Cafe’ & Grill in Pigeon Forge TN for this annual event.  The atmosphere is lodge-like, the food is delicious (and reasonably priced) and they have a couple of unique features.

One is that they make their own bread.  The other is that they’re attached to a pottery studio and shop.  Their menus used to say, “When comparing us to another place, ask them if they make their own bread fresh daily.  If yes, ask if they grind their own grain for that bread.  If yes,  ask if they make the plates that fresh baked bread is served on!”  I didn’t see that this time, but maybe I missed it as I poured over the many tantalizing offerings.  All of their serving pieces are hand-thrown pottery, made right next door. 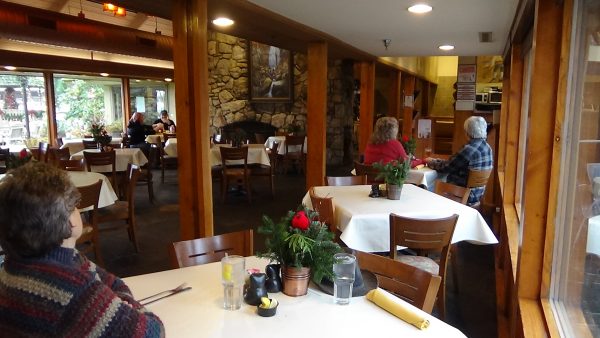 The centerpiece of the Pottery House Cafe’ indoor dining area is a massive stone fireplace that adds to the lodge-like atmosphere.  We arrived just as they opened for business today so I could get pictures without crowds of people in them (that may not appreciate me photographing them).  It does not take long for the dining rooms to fill up.  There are this main dining area and another less elaborate room in back that could be used for large parties or meetings. 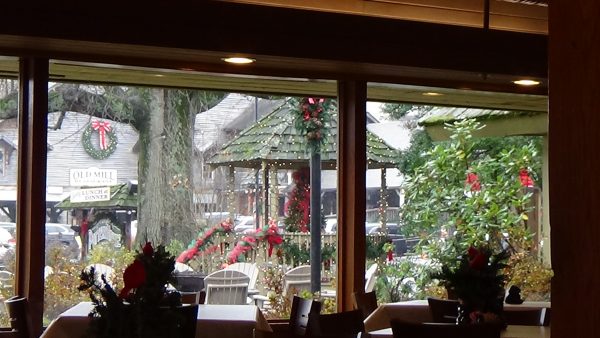 Visible though the large windows on the front is an outdoor entertainment area including a gazebo where musicians or other performers can entertain. 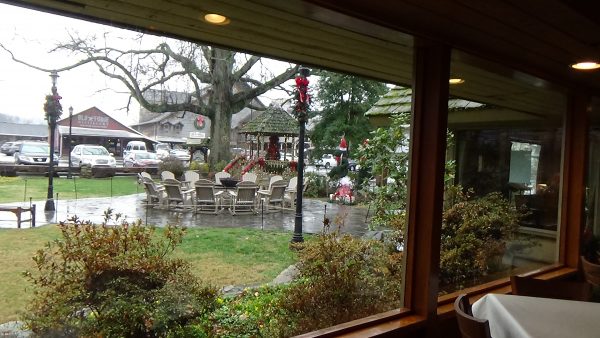 The audience can be seated on the provided chairs and benches, or their own folding chairs, or by just claiming a piece of lawn and sitting on it.  This is used mostly in summer, but we have seen small gatherings out there even on our Christmas Eve visits to the Pottery House Cafe’. 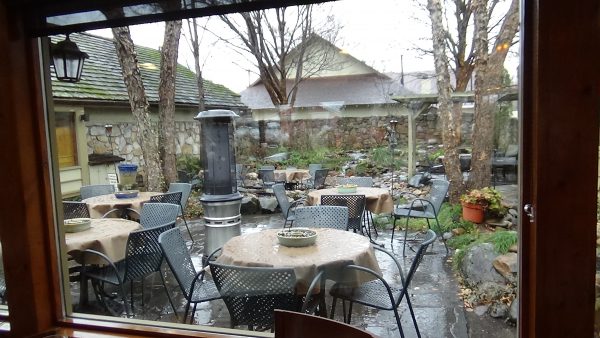 Through the large windows on the other side can be seen the patio dining area.  This is not usually in use when we come in late December, but would be a pleasant place in more temperate weather.  The patio features a flower garden that runs along the perimeter, a brook that winds through the patio and empties into a small fish pond.  There are large outdoor heaters to chase away a mild chill, and might have sufficed on our visit today had it not also been drizzling. 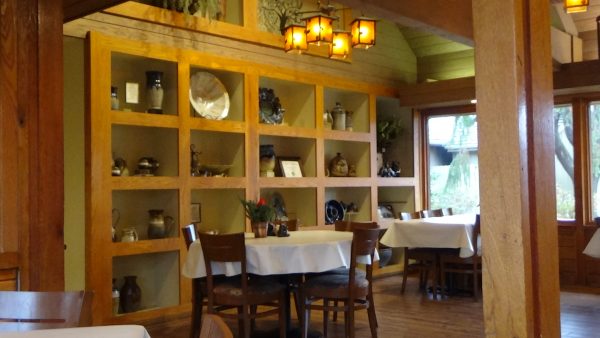 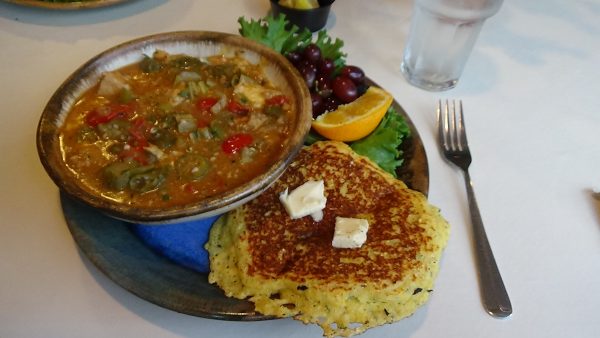 My meal today consisted of a chicken gumbo over cheese-grits with jalapeno cornbread and fresh fruit.  It was delicious!  Here you can see some of the hand-thrown pottery serving pieces.  They did not make the fork. 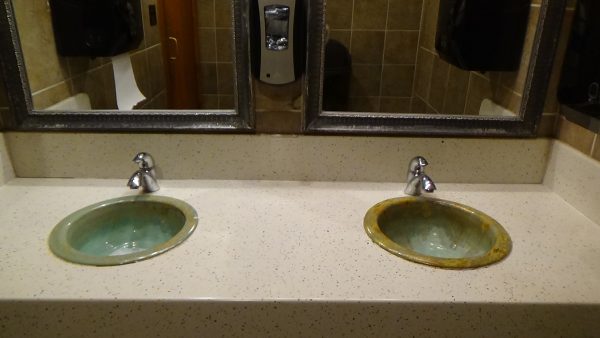 Even the sinks in the men’s room are hand made!  I assume something similar is in the ladies room, but did not investigate that.

The Pottery House Cafe’ and Grill has become one of our favorite places to go on those rare occasions when we eat out.  If you find yourself in or near Pigeon Forge Tennessee and enjoy a rustic atmosphere that is also spotlessly clean and bright, drop in and check them out.  I’ll bet they’ll become a favorite for you too.

Check out their Web Site for detailed location and hours.

For a Peek Inside