We often think of outer space as being a great big empty nothing littered with trillions of stars and their attendant planets.  All big enough to avoid and with lots and lots of empty void between them.  Other than having to traverse the vast distances, empty space offers few dangers, right?  Very wrong!  In this episode of my on-going series about the fact and fancy of science fiction we’re going to take a look at what life for human beings would be like in outer space.

First, let’s look at the area of space with which we are most familiar: that shell of space immediately surrounding our own planet.  The most prominent problem here, or in any part of outer space, is the awesome destructive force of a near perfect vacuum.  Any craft sent into space must be built to resist the forces of the interior atmosphere wanting to rush out into the vacuum surrounding it.  Even a pinhole in the hull can turn into disaster if the material is not strong enough to resist the erosive, tearing forces of hydrodynamics as the air screams out the hole.

Orbital space has another main issue: space junk.  Human beings have become experts at trashing virtually every environment they can get to, including the space around our planet.  NASA says that currently there are approximately 6,300 tons of man-made debris orbiting the earth; some as small as a fleck of paint, some as large as the defunct Vanguard 1 satellite. 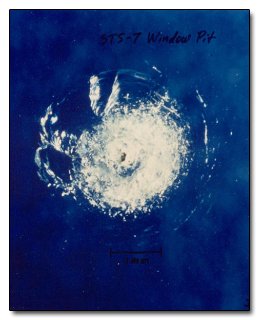 What harm can a fleck of paint do?  When it’s traveling at 17,000 miles an hour, even a paint fleck can do serious damage.  Early in the space shuttle program, during the STS-7 mission, a tiny paint fleck hurtling through space hit a shuttle window, causing so much damage the entire window had to be replaced.  There are tens of thousands of junk bits in Earth orbit, some just flakes of paint, but some are nuts or bolts, tools lost by space walkers, discarded fuel tanks or rocket stages of previous space craft, even whole satellites.

Physical shielding can help deflect the smallest bits, and the biggest ones can be steered around, but most of them are too small to detect in time to maneuver away from and too large to be deflected with current materials.  This poses an ever-increasing risk to the ISS and to any spacecraft passing through our orbital space.

Earth is the worst (that we know of) because of our propensity to litter, but any planet will have captured in its gravity well some cosmic souvenirs in the way of small asteroids and micrometeorites.  Any place that you encounter something larger than a marble, this can happen:

Generally speaking, the open space between planets is not as congested as the space immediately above a planet, but it is not without dangers.  There are still some rogue bodies: asteroids, meteorites, even clouds of space dust that have ripped shielding from and changed trajectories of interplanetary exploration satellites.

Another, perhaps more sinister, danger comes from solar radiation.  There are several forms of high-energy, ionizing cosmic ray “winds” that blow through a solar system.  Most originate from the solar systems own star, but leftovers from collapsing stars and supernova explosions that were thrown into space also factor in. Curtis & Letaw (1989) estimated that on a three-year Mars mission, about 30% of the cells in an astronauts body will be traversed by HZE nuclei with Z values (the number of protons) between 10 and 28, and virtually all of his or her cells will be traversed by nuclei with Z values between 3 and 9. These traversals result in numerous ionizing events, or hits, on cellular molecules. The biological effects of HZE nuclei can include cancer induction, damage to the central nervous system, the immune system and the eyes.1  Effectively shielding space travelers from this insidious solar wind would have to be a major concern in the design of any space ship.  But it is not only the astronauts that need protection, for the ships electronics can also be severely affected by this ionizing radiation.

Lack of gravity is also a health concern for extended space voyages.  While “swimming” through a space craft using just hand holds may look cool, the debilitating effect of not using major muscles sets in quickly; muscles atrophy and bones become brittle.  There are also cardiac and digestive issues as well as psychological effects to prolonged weightlessness.2

The far emptier space between solar systems should be even less trafficked by small bodies.  However, those that are encountered will likely be at relativistic speeds.  Hitting even a grain of sand at the speed of light could be catastrophic! The solar radiation levels will be lower than when in close to a star, but it will still be there posing a threat to ship and crew.  And again, the speeds at which these rays would be encountered will make them all the more aggressive.  Obviously, totally effective deflective shielding will be a critical component of an interstellar ship.

Energy production, storage and consumption will also be a critical factor.  It will take vast amounts of energy to power the ship and support the lives of its crew for the extended voyage times needed to reach another solar system, even at near the speed of light.  The faster a ship travels, the more energy it will consume.  Normally this relationship is not a steadily rising line on a chart, but a bell curve with consumption rising exponentially as speed rises linearly.  Speed never has come cheap.

Time and distance are still our greatest challenges to interstellar travel.  Light travels at 186,000 miles per second.  The nearest known star to the Sun is Proxima Centauri, which is 4.23 light-years away.  4¼ years away traveling at light speed.  The fastest spacecraft we have sent out, Voyager 1, is currently moving at 1/18,000th the speed of light. At this rate, a journey to Proxima Centauri would take 72,000 years.  We will have to do better if we want to visit the stars.

Speculative fiction is rife with propulsion systems that circumvent these straight-line pathways by warping space, or using wormholes, or dropping into sub-space to shortcut normal space in another dimension.  If some form of extra-light speed travel is not developed, our journeys between stars will be taking place in Generation Ships3 where the children or grandchildren of the original crew will be the ones making the landing on the new planet.

Carrying enough food, water, air, repair supplies and parts for such a journey is mind boggling to consider.  Air and water will have to be cleansed and re-used.  Food will have to be grown onboard.  Parts and supplies may have to be manufactured as well.  And then… what will it be like for people who were born and raised aboard a space craft that is a self-contained, miniature world, to leave it behind and stand on the surface of a planet?  Talk about psychological issues!

Which brings me to my final point.  On any colony ship that takes more than a few months to get where it’s going – and where the crew/colonists are not in some sort of stasis – the greatest challenge to the mission will not be resources or structural integrity but interpersonal conflict.  A generation ship will be like a small town with no roads in or out, no telephone, no television, radio or mail trucks connecting it to the outside world.  It will be quite isolated.  How do you keep a ship full of colonists, who are cut off from their home world, focused on a mission that they may not see completed in their life time?  How do you prevent some sort of “class warfare” as various factions vie for supremacy?  Human beings, as a species, do not tend to get along well in anything larger than small groups.  Even families squabble.  Pack a few thousand colonists into a giant tin can, sealed up tight, and send them off on a decades-long journey to another planet, and it’s going to get messy before they get there.  That is just human nature.

Others in This Series:

More on This Topic:

20 thoughts on “Space: a Really Dangerous Place to Live”

When Being Green Makes You Blue: Global Warming

The Sound of Sirens