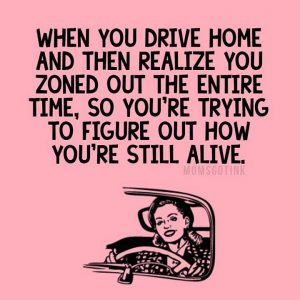 This, supposedly humorous, picture has been making the rounds on Facebook. I imagine we’ve all spaced out behind the wheel of our motor vehicles once or twice. What is frightening is that this post has collected dozens of comments from people who say they’ve done it. Many say it’s happened several times. Some say it happens to them frequently. That is worrisome, and the biggest reason I can think of to push for the development of self-driving cars.

My Twin-Brother-By-Another-Mother and I have discussed this a few times, and the following is a melding of our ideas.

Self driving motor vehicles will be a novelty that catches on slowly. People described above will be the primary customers: people who, for whatever reason, cannot manage to pay attention to their driving will see self driving cars as a great convenience. As the vehicles on the road become primarily self-driving, society will be ready for the next step.

Why does a person need to OWN a self-driving car? We don’t believe they do.

Motor vehicle manufacturers have been pushing the idea of leasing instead of buying outright for years. This is a transitory move to what many think is coming. At first it will be a “service contract” that provides whatever vehicle we need at the time: econo-box for commuting, pick-up truck or van for weekend projects, cushy cruiser for a road trip. Whatever we need, they’ll deliver it and pick-up what we have now. We won’t OWN any of these, but we will have possession and thus need a place to keep it.

Young people, especially young people who live in a city, do not feel the need to own a motor vehicle like us older folks do. For us our “car” (even if it’s a truck) is part of our lifestyle and identity.

These young folk see the parking and maintenance as a hassle they don’t want to deal with and (according to studies I’ve read) are more and more interested in mass transit, bicycles, and Uber. Their designer clothes and favorite Starbucks coffee flavor says more about them than what they ride to work in.

Currently, the vast majority of our vehicle’s time is spent sitting around unused and vast amounts of land are used up for parking lots full of idle vehicles. As people move toward tiny homes, garages become unwanted monsters.

When most of the motor vehicles are self-driving (this includes trucks and buses) and us old-fogeys are dead or institutionalized, mass transit based on self-driving personal vehicles will take over and huge parking lots will disappear.

If a company will guarantee a transport to be at your location within 5 minutes you could kick the storage an maintenance issues to the curb and just pay as you go.

Mike thinks first of going to work, because that’s what he does most often. The car arrives at the prearranged time of 6:45 am, picks him up and delivers him to work at 6:55 am. Now instead of parking and just sitting there all day, the car can go do other things. Another car can then pick him up at 4:00 pm and deliver him home.

Shopping? The car takes you to the store and drops you off.   If you have groceries or other items in the car from a previous stop, that car can’t go anywhere else until you empty it out. There will be a small charge for parking and wasting time, but we have always paid for convenience. It wouldn’t have to wait if we hadn’t actually purchased anything yet or if we can carry our purchases as we store hop. When we’re ready to head for home or the next shopping center, we give the waiting car a whistle or call in for a ride.

The guaranteed time to be there is because of emergencies. We have to go from here to there because (fill in the blank) and the transport has to be there. No choice. Maybe there would always be something moving or if not, like at night in a quiet neighborhood, one might be parked to be the designated neighborhood emergency transport. Or maybe there would be a parking facility within a mile that would store several transports for that reason. These small lots could double as charging stations because these motor vehicles will almost certainly be electric powered.

Transports would come in several versions, just like our vehicles do today. Personal transports to go to and from work, larger transports for shopping or traveling with companions, haulers for visiting the grain store, lumber yard, etc.

The down side is for rural residents. This will work great for cities, but wait times may be long for those rebels who refuse to be herded together like cattle. Some may hang onto our antique motor vehicles and drive ourselves.

And … when these self-driving cars finally learn to fly, we can reclaim millions of acres of land currently consumed by roadways. We’ll need walking paths in certain areas, but the vast complexes of highways and interstates will be a thing of the past. We will finally have entered the world of The Jetsons!

So, what do you think? Please share your thoughts in the comments below. Dissenting opinions are welcomed but trolls will be shot.

3 thoughts on “The Future of Motor Vehicles and Travel”

Lessons Learned from Ananias and Sapphira