I have Mitch Mitchell of ImJustSharing and his comments on a Wayback Whensday post to thank for the inspiration for this post.  We were discussing caffeine in beverages.  He asked a question about where caffeine comes from.  It was a perfectly legitimate question and related to the topic of discussion, so I answered it.  Before posting, I (like any responsible journalist would) checked my stated facts for accuracy and turned up an additional historical tid-bit or two, so I worked those in as well.

Mitch’s response to my reply indicated pleasure, and perhaps some surprise, with the quality of my answer.  And I wondered why.  What made this comment so different from dozens of others Mitch and I have exchanged in the past?  After all, I’m a well-read, educated fellow.  My head is crammed full of useful knowledge – and a fair bit of useless fluff that sneaks in.  Why would he be surprised to receive a well-considered response from me?  I pondered that for a while.  When I awoke, I realized it’s because it has not been the type of response I’ve been posting.  For that I blame Chuck… at least in part.

All the Knowledge of Chuck 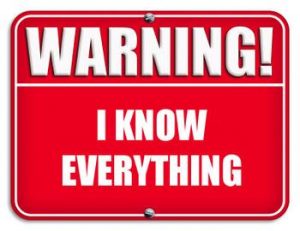 Back in the day of yore, before the internet was available to the public we had BBSs.  Bulletin Board Systems were a primitive version of today’s discussion forums and chat rooms, except that, because there was no internet yet, participants joined in by mashing their telephone hand-set into the pads of a big, clunky modem (think Matthew Broderick in War Games) and dialed a phone number for the desired discussion forum.  The BBS’s computer and the participant’s computer squealed and squalled at each other for a moment as they shook hands and agreed to talk, then words would scroll up the caller’s computer screen, which back then were either amber or green text on a black background.  Minimal graphics, no mouse, no Windows G.U.I.

A BBS offered various forums for various topics.  Users paid for a membership and could log in to read the messages left by other users and respond to them in a threaded conversation format.  Better BBS’s had multiple incoming lines so that several users could be “on-line” at the same time, and by responding to one another’s posts could carry on a real-time, chat style discussion.

My favorite BBS was The Dragon’s Lair.  While The Lair probably had a hundred or so regular users, there was a core group of about a dozen, maybe eighteen, users who had gotten to know one another well and made it a point to dial-in every night to “talk”.  I went by the handle Conan the Librarian.

Even back then I was a writer, and I had a room full of books from which I could pull great information.  I also had learned to use tools like Gopher to ferret out information from the computerized knowledge repositories of universities and research facilities as well as services like Delphi.  This was all done above board and perfectly legally — I have never been a hacker.

Everyone in our group was intelligent and well informed and we had some great discussions.  Few of them were the dry, intellectual pontifications you might imagine.  We were not eggheads.  Most were quite stimulating, a few were hilarious.

But there was one fellow: Chuck, who stood out.  I can use his real name because he was as old as I am now back when I was as young as I was then, so I’m sure he’s dead and buried and, as such, will not take offense to my discussing him.  Chuck knew everything.

Bear in mind that all this occurred before the internet, before Google or Bing, before the sum total of mankind’s knowledge was available to anyone who could type a phrase into a search bar.  No matter what we discussed, Chuck had facts and figures for it.  We thought he was making it up, so a few of us researched some of his figures – he was spot on, every time.

If his responses had been made only in delayed postings, he might have had time to search an encyclopedia for the information, or call some scientist friend, but when these discussions were happening in chat mode, there was no time for that.  It baffled us.

On several occasions we actually conspired to work into a discussion engineered to be so bizarre that Chuck would have to concede a lack of knowledge.  Not one of these Stump Chuck sessions succeeded!

Chuck quickly became the go-to guy for anything factual… making him both highly appreciated and much despised.

Another reason for my commenting method has to do with the nature of blogging and commenting on blogs.  In most cases, it seems inappropriate, even rude to expound at length about things posed in other people’s blogs – and I do tend to get verbose in my impromptu writing.  Being concise requires editing.  And I don’t want to appear to be trying to show-up the host blogger.  So I keep responses short.  Sometimes humorous — or an attempt at humor anyway; my sense of humor is not always appreciated by all.

Chuck had a way of irritating everyone simply because he knew so much.

Shortly after I first got into blogging, Tristan taught me to comment in Marketing Mode.  All bloggers know what this is and how it works, but we generally don’t admit to it.  I would comment primarily in an attempt to draw traffic back to my own blog.  To do so I needed to avoid looking like a pompous jerk (if possible) yet not come off like a hit & run spammer either.  Happy medium was the modus operandi; try to contribute something, but don’t linger too long; there are many more blogs to get to this evening.

A while back I read a post on Patricia’s Lavender Uses blog where she discussed traffic and it’s sources, and it got me to thinking (I have a bad habit of doing that).  I wondered how much of the traffic I was getting was actually organic traffic: people who are genuinely interested in reading my prattlings, and how much of it was simply people who felt obligated to comment because I had commented on their blog.  Wasn’t this much the same as maintaining a circle of friends by buying them gifts?  If you stop buying them off, will they just wander away in search of another sugar daddy?  Let’s find out.

The marketers among you — if indeed any are still dropping by — are no doubt saying, “It’s your funeral buddy”, but my intent when I got into blogging was not necessarily to earn my income from blogging.  I sell my work, that’s where I get my income.  For me, blogging is, at best, a vehicle for entertaining and informing others, and at worst, a promotional tool.  Used as such, if the people who come to read are repaying a courtesy and intend only to skim my post to get the gist, leave a quick comment and move on, then this blog has failed entirely in it’s purpose and I would be far better off devoting the many hours a week that I put into blogging to commercial writing instead.

I subscribe to a half-dozen blogs through their mailing list or RSS and read them as soon as I get the notice.  I often comment on these… but generally not with pontifications.  I still read a great many other blogs because I learn things from them, but unless I feel compelled to join the discussion, I don’t.  I am no longer in marketing mode.  That way they do not feel obligated, and they will not give me a false sense of popularity.

My reading list had become overwhelming; so many interesting people, so much great information, but I must prioritize and not commit to reading everything that is available.  I admit to being an information junkie – I always have been – it’s one reason I was known as Conan the Librarian.  But the modern, internet-based world is too complicated, too crowded, too swiftly moving to be fully embraced from within a Simple Life.  I stepped away from corporate life and power suits to get away from such stresses.  But, like swimming in a rip tide, it’s easy to get sucked back in if you’re not careful.

I’m not wagging my finger at anyone.  This is simply my choice.

If you have read all the way to this point, I thank you.  You are one of the people for whom I am writing, and I do appreciate you.  Thank you for enduring this ramble.

2 thoughts on “Can You Have Too Much Knowledge?”

A Religion of Convenience: This God or That One