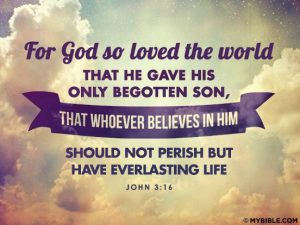 The one Bible passage that is most remembered and quoted by Christians and non-Christians alike is John 3:16

16 For God so loved the world that He gave His only begotten Son, that whoever believes in Him should not perish but have everlasting life.

A powerful statement of hope that seems to allow anyone to claim eternal life if they acknowledge a rational acceptance that Jesus was the son of God. But if we pick at that passage just a little, we get it to bleed truth not seen with a casual reading of modern words.

For one thing, like many Bible verses that are plucked out and held aloft to prove some point or other, there is more to it. If we continue reading:

17 For God did not send His Son into the world to condemn the world, but that the world through Him might be saved.

18 “He who believes in Him is not condemned; but he who does not believe is condemned already, because he has not believed in the name of the only begotten Son of God. 19 And this is the condemnation, that the light has come into the world, and men loved darkness rather than light, because their deeds were evil. 20 For everyone practicing evil hates the light and does not come to the light, lest his deeds should be exposed. 21 But he who does the truth comes to the light, that his deeds may be clearly seen, that they have been done in God.”(NKJV)

A point that is made in verse 17, reiterated in 18 and explained in 19 through 21 is that Jesus does not condemn. The world: humanity, is condemned already and has been since Lucifer lured Adam and Eve into breaking the one rule God had given them. Rebellion and sin were born then and have been with humanity since.  We are born into it.

Verse 18 says, “He who believes in Him is not condemned”. That term “believes in Him” is much deeper than it would appear. We may try to make this mean that we need to believe in Jesus the same way we believe that Albert Einstein was a brilliant mathematician or that air exists. We academically acknowledge these facts, but do not put any passion or commitment into them. And that is the difference. The term “believe in” would more accurately be translated “believe into” and the picture that the original Greek paints is one of melting or fusion. We don’t just believe that Jesus was a religious and historical figure, we become part of or joined to Jesus.

Jesus is not a topic we look into on Sunday mornings, then leave laying on the pew as we walk out. Jesus is a filter we look through all day, every day. We see the world differently when we see it through Him. How we react to things changes when we consider His influence in our lives.

If we can go through a normal day and not think of Jesus at all, we have not “believed into” Jesus and we cannot claim the promise of eternal life.

The phrase “believe in His name” appears 3 times in the gospel of John (1:12, 2:23, 3:18) and it combines the “believe into” concept with another: the word translated as “name” does not refer to the given name of Jesus, but to the concept of Christ, the anointed one of God, the Lord of salvation. When we believe into Jesus, we’re joining not with the man, not with the Son of God, but with the anointing, the salvation which he brought.

This new birth does not come through blood (family lines), nor through the flesh (your personal efforts), nor through the will of man (something done by another human, such as a preacher) but only by God through Jesus when we become a child of God.