I find it interesting how many of the conspiracy channels are running video “expose’s” insisting top government officials have leaked classified information to them that aliens will invade Earth in late 2016 or early 2017. I guess they’re hoping their followers didn’t see Anonymous and WikiLeaks pieces on the Beneson Strategy Group advice to the Clinton Foundation on the (potential) plan to use Project FireSign (a.k.a. Blue Beam) to institute martial law because of an apparent alien incursion. 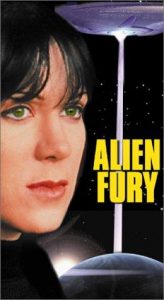 Speaking of lies, deception, and twisting everything: I watched a movie the other day called Alien Fury: Countdown to Invasion.

This is the story of a government agency (S.T.R.A.W.) that discovers spacecraft massing on the Moon and tries to warn the military about an impending invasion. Of course the military thinks they’re wacky – until a spy satellite sent to take their own photos is shot down, after they glimpse alien ships, then they prepare to nuke the alien base … and things start to get really weird.

If you have any interest in watching this movie, skip the next section. It will spoil it for you.

As the Peacemaker tactical nuke is on its way to the moon (and doing so far faster than we have EVER been able to get a rocket out there, by the way) it is discovered that the invasion is a hoax, perpetrated by Bill Templer, Director of S.T.R.A.W. because his agency’s budget is being eliminated and he is about to become unemployed. He thinks that discovering an alien fleet about to invade Earth will prove the value of his agency and insure it survives a while longer. So Templer and a close group of co-conspirators doctor some satellite images to show alien ships, bristling with what appear to be weapons, parked on the back-side of the moon.

But a local police detective who has been investigating the murder of a S.T.R.A.W. employee stumbles upon evidence of the hoax and confronts S.T.R.A.W. with it.  He is told there really are aliens, but they can’t prove it sufficiently and S.T.R.A.W. is using the hoax to goad the military onto action and prevent an attack that is coming. They prove it to the detective by dissecting another murdered S.T.R.A.W. employee who shows definitely alien physiology.

Then, in yet another twist, we find Templer is an alien. He initiated the whole process for the purpose of goading his alien masters into attacking the Earth in self-defense, even though the aliens are peaceful observers. Templer has gone a bit power crazy and has developed an egotistical hatred of mankind as an inferior and dangerous species.

This thing has more twists than a bowl of spaghetti! And there is one last twist I won’t reveal in case you change your mind and decide to watch it. Besides, explaining that would require filling in one of the sub-plots and that would take a while.

Alien Fury is a made-for-TV movie, released in April of 2000 by United Paramount Network (UPN). There is no nudity, or blood splattering violence, or bad language. It is rated PG-13 for violence (fight scenes) and some brief sensuality.

The acting is pretty decent, though the writing leaves the characters stereotyped and cardboard. It won’t win any Best Picture awards, but it is a good schlocky-sci-fi flick and I’ve added to my Keepers folder. I thought it was particularly humorous that I stumbled across it during this fervor over leaked information about an impending alien invasion hoax if it looks like the Republicans will win the Presidential election.

IMDB.com currently rates Alien Fury: Countdown to Invasion at 3.9 out of 10 stars, but its popularity is rising. I guess others are seeing the humor in this too.  A good copy of Alien Fury is available for free on YouTube. Enjoy the movie and do NOT watch the sky on election day!
Director: Rob Hedden
Writer: Rob Hedden
Stars: Dale Midkiff, Dondre Whitfield, Stephen Tobolowsky | See full cast & crew

Sci-Fi Sample: Tale of the Draggon

A Most Beloved (And Misunderstood) Bible Passage