We all know how memories are stored in the human brain, right? Well … no, actually we don’t, but we DO know how information is stored in machine or computer memory … right?

Today memory chips are super-minature transistors on tiny circuit boards, but back in the day computer memory was massive by comparison. Magnetic core memory was invented by Jay Forrester of MIT as part of the Whirlwind computer, the prototype for the AN/FSQ-7 that was the heart of the SAGE air defense system in the ‘50s. Whirlwind was one of the first truly modern computers. The Whirlwind was the first computer to use Core Memory for RAM, a storage method that flourished until the 1970’s. 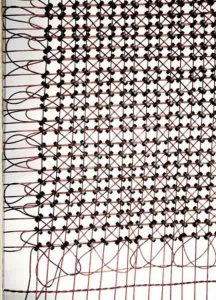 Core memory permanently stores binary data on tiny doughnut shaped magnets strung together by a wire grid. The process for making core memory planes was never automated; they were always made by hand. Women literally wove them; it was called LOL memory for Little Old Lady. 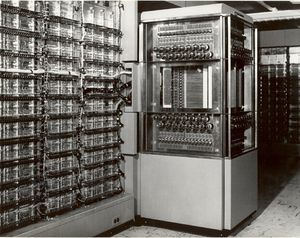 64K, that is 64 Kilobytes or approximately 64,000 bytes (a byte is 8 bits and is enough memory to store one character: a number, letter, or symbol), is the same amount of RAM memory my first desktop computer had:

That was in the 1980’s: quite an improvement in 40 years. It used a cassette tape for storing data long-term!  Today, a decent electronic wrist watch can have 64K of memory built into it!

Want to know a little about how machine memory works? Here’s a short TED film that explains it for you:

That won’t earn you a Geek badge, but at least you know what those acronyms mean and what the differences are. Hope you enjoyed it!