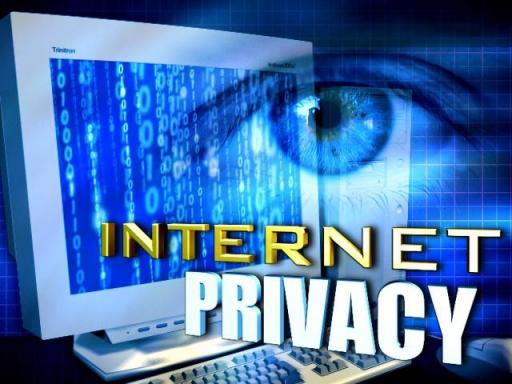 A while back my computer, running Microsoft Windows 8.1, started popping up a small window inviting me to upgrade for free to Windows 10. That’s very nice of them. To my knowledge, Microsoft has never before given away a new operating system to the general public. Upgrading is usually quite expensive. I didn’t know much about Windows 10 – it had not yet been released, the invitation was to reserve my copy when it was available. I poked around in my favorite software review sites to see if any pre-release notes had been posted. They had. They were not good. There were major concerns about internet privacy.

I checked with my twin-brother-by-another-mother: who happens to be a Certified Microsoft Network Engineer and computer security specialist. I asked him what he thought of the upcoming Windows 10. It wasn’t good.

At that point they did not have all the bugs worked out of it – but they would. The biggest issue people had about the long range usage had to do with privacy concerns.  There were many.  Windows 10 spends a lot of time “phoning home” to report on what you have been doing, where you have been browsing, what you have been looking at … (raised eyebrow). It’s not that I go to porn sites or hang out in terrorist chat rooms, or spend any time trying to hack into places I don’t belong – it’s the principle of the thing. I don’t like being spied upon.

Oh, sure: I know they just want to sell my browsing history to merchants so they can better target their advertising to my possible wants. That’s a good thing, right? Amazon won’t be trying to sell me tampons. Microsoft just wants to be sure my “user experience” is as smooth and trouble free as possible, so they monitor my progress around the web and watch for hiccups. Then they can tweak the software to make it better. We all benefit! Right?

I’m not going to go all political, but I will say that I don’t think major corporations or our Government are primarily concerned that my browsing experience is pleasurable. I’m far too paranoid to believe that. Sometimes paranoia comes from a psychological disorder, sometimes it comes from life experience.

Mike (my T.B.B.A.M.) pointed me to a utility that removes the little program that pops up that annoying announcement every so often. I asked and he answered that Microsoft was not going to force anyone to upgrade, but they will discontinue all support for older operating systems. That’s nothing new.

Last night, Marie was on her computer and she asked me to come over there and look at something. This notice had popped up on her screen: 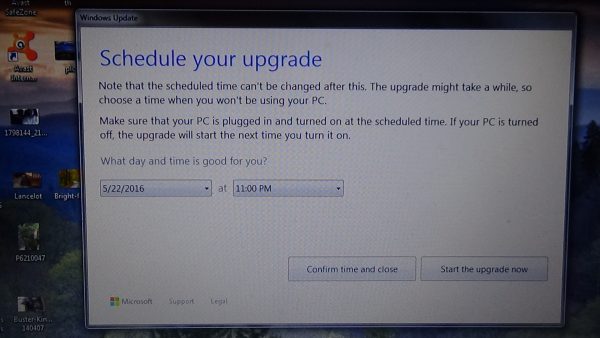 At first I thought it was some sort of malware and took steps to identify and remove it. No malware found. There was no way to “skip” this. It offered two choices: upgrade now or upgrade later: any day and time within the next four days, but once set that option cannot be changed or canceled. When I used Task Manager to shut down the announcement process, it opened another copy of itself as it shut down. There didn’t seem to be any way to get around it.

Time to call on Mike.

Mike confirmed that, yes, Microsoft had changed their minds. They expected all Windows users to jump at the chance to get the latest software for free and upgrade. There were, apparently, a large number of Rebel Scum, such as myself, who were not willing to trade our privacy for a more stable OS. Mike says that Win 10 is a better platform than version 7 or 8 … but there are those internet privacy issues.

We’re not alone in this outrage of Microsoft hijacking our computers and forcing an upgrade we don’t want upon us.  Hundreds (as of this writing) of outraged users have posted complaints to Microsoft’s Facebook page, and WND posted this about the Bill Gates of Hell and Windows 10 (it’s a n excellent article, I suggest you read it).

Mike steered me to LaptopRepairLeeds.com and a utility they developed (GWX Control Panel) to remove this forced upgrade package.  I always trust Mike on things like this. There are a lot of hackers and crumbdens out there who will offer a free tool to do something you want, but in doing it (if it does it) it also loads up your system with adware, malware and/or a virus. One has to be SO careful about this stuff.  I trust Mike; Mikie knows.

The tool downloaded in a flash, installed effortlessly, and gave a small control panel that is easy to understand and use. It allowed me to custom tailor what it does, from just blocking this pop-up screen to removing the Windows 10 preparation files and programs (almost 7 gigabytes worth!) that had been surreptitiously downloaded to our computers without permission in preparation of launching this invasion. It even allowed me to set up a watch-dog utility that will alert us if Windows 10 tries to slip into our systems again.

Eventually we may have to upgrade to Windows 10 (or 12, or 18, or whatever is the current version when we buy a new computer), but since Marie’s computer alerted her that “Windows 10 was about to be installed, but this computer is not configured to run Windows 10 – buy a new com

puter if you want Windows 10” allowing Microsoft to forcefully install their software would have trashed her computer, we would have been exceedingly angry about that. For now, we will fight tooth and nail to keep what we have. When we upgrade our computers, we’ll have to consider moving to a Mac or a Linux machine instead. We ARE Rebel Scum!