Want to have a little fun with literature? Here are 6 bits of trivia about authors, see if you can guess who each famous author is. (Answers at the end, but don’t peek)

1) What name is this author better known by?

This author was born in 1904 in Springfield MA. He graduated from Dartmouth College and went to Oxford University in England to get a PhD in Literature. In 1954 his publisher read an article in Life magazine detailing reading troubles children were having in the US. He asked this author to write a book that would engage young children and encourage them to read. In 1960, this author was challenged to write an entire book using only 50 words. He successfully accomplished both of these tasks. This author was born Theodore Geisel. By what name is he better known?

2) Can you name this famous author?

This famous author was born April 28, 1926 in Monroeville, Alabama, a city of about 7,000 people. This author attended Huntington College 1944-45, studied law at the University of Alabama 1945-49, and studied one year at Oxford University. In 1960 this author published her first (and until just recently only) book which won a Pulitzer prize the following year. In 1997 this author was awarded an honorary Doctorate of Humane Letters at Spring Hill College in Mobile, Alabama. Professor Margaret Davis said this author was being honored for “lyrical elegance, portrayal of human strength, and wisdom.”

3) Solve the mystery and guess the author.

This mystery writer’s books have sold over a billion copies in the English language and another billion in over 45 other languages. This author has written 79 novels and short stories and over a dozen plays. One of these plays, Mousetrap, debuted on the London stage in 1952 and is still running today!

As a change of pace this famous author also wrote 6 romance novels under the pen name Mary Westmacott. This authors greatest mystery was in orchestrating a complete disappearance for months – and never explained why. This author received England’s highest honor, Order of Dame Commander of the British Empire in 1971.

4) Which of the following books was NOT written by Mark Twain?

A) The Adventures of Huckleberry Finn

B) The Last of the Mohicans

C) The Adventures of Tom Sawyer

5) Which of these titles WAS written by Earnest Hemingway?

A) The Grapes of Wrath

B) To Kill a Mockingbird

6) Which of the following is NOT a play written by Shakespeare?

A) The Barber of Seville

B) The Merchant of Venice

C) The Merry Wives of Windsor

D) The Taming of the Shrew 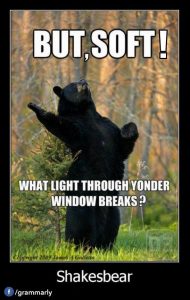 4) B: The Last of the Mohicans

6) A: The Barber of Seville

If you got 5-6 correct answers, CONGRATULATIONS! You were a star pupil in literature class.

Credit where credit is due: This quiz came off the back of a breakfast cereal box packaged and distributed by Food Club brand.

Cable vs. Fiber Optic for Internet