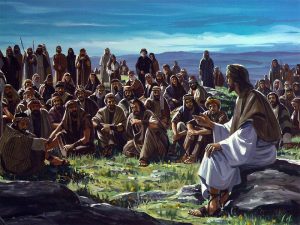 In Greek the word for disciple is “mathetes” meaning a “learner” or “follower” and refers to the accepting and following the views and practices of a teacher.

In Greek the word for apostle is “apostolos” meaning “one who is sent out with a special commission as a fully authorized representative of the sender”, like an agent or ambassador.

Early in His ministry Jesus chose twelve men as He encountered them in their lives.  The list of His inner circle is mentioned in Matthew 10:2-4, Mark 3:16-19, Luke 6:13-16 and Acts 1:13. These twelve men were hand picked for special training to carry on His ministry and spread the Gospel after He ascended back into Heaven.

In this bible study we will list the names and meaning of these apostles of Jesus,  their occupations, and relationships. At least, as much as is known.

(Greek: Petros meaning “Rock”) – Peter was one of the most prominent of the 12 apostles, both for his failures and his ultimate success. He was brash, impulsive and a natural spokesman.  He was a native of Bethsaida (John 1:44), but when he encountered Jesus he was a fisherman who lived in the fishing town Capernaum (Mark 1:21,29)  on the Sea of Galilee and a married man (Mark 1:30, 1 Cor 9:5).  He was the brother of Andrew.

His Hebrew name was Simon, a common popular Hebrew name. Jesus gave him a name Kephas, an Aramaic name. John translated that into Greek: Petros, meaning “Rock” (John 1:42 – “you will be called Cephas.”).

(Greek: Andreas, meaning “manly” or “man”) – Andrew was the brother of Simon Peter, and the son of Jonas.  He lived in Capernaum, like his brother, and was a fisherman by occupation. He brought Peter to Jesus. (John 1:35-42)

(Greek: Ioannes, derived from the Hebrew name Yochanan meaning “Yahweh is gracious”) – John was originally a disciple of John the Baptist (John 1:35), and  was introduced to Jesus in John 1:35-39. He was the brother of James and the son of Zebedee who were all fishermen (Mark 1:19-20). He lived in Capernaum in Galilee, but most probably a native of Bethsaida.  He was one of the three disciples, closest to Jesus, the others being Peter and James.

(Greek: Philippos, meaning “Lover of horses” composed of philos “friend, lover” and hippos “horse”. ) – Philip was a close friend of Andrew and Peter and a native of Bethsaida (John 1:44). Jesus called Philip to service near Bethany where John the Baptist was preaching (John 1:40-43). He was the one who persuaded and brought Nathaniel to Jesus. (John 1:40-51)

(Greek: Bartholomaios meaning “son of Talmai”) – Bartholomew is mentioned in all four lists of the apostles, but there is no other reference to him in the New Testament. Nothing much is known about him.

(Greek: Thomas from Aramaic: te’oma meaning “twin”) – Thomas is also called Didymus or “the Twin” (John 11:16, 20:24, 21:2). When Jesus appeared to the apostles after His resurrection, Thomas was not present with them. Later on, when the disciples told him about Jesus’ appearance, he would not believe them, until Jesus showed Himself a week later. (John 20:24-29). His occupation is unknown.

(Greek: maththaios meaning “gift of Yahweh”) – Matthew is also called Levi (Mark 2:14, Luke 5:27). He was employed as a tax collector: a most hated trade by the Jews because of the graft it usually included. A Jewish tax collector (collecting taxes for Rome) was considered a traitor.  Jesus called him to discipleship while he was at his tax office (Matt 9:9, Mark 2:14). He is the author of the Gospel according to Matthew.

(Greek: Iakobos.  In Hebrew: Ya’aqov or Jacob meaning “holder of the heel” or “he who supplants his brother”) – James was the son of Zebedee (Mark 1:19-20) and the older brother of John (Matt 17:1). James was  a fisherman, along with his brother and father, at the Sea of Galilee in partnership with Peter and Andrew. (Luke 5:10). James was the first disciple (apostle) to be martyred for preaching the gospel of Jesus. (Acts 12:1-2)

James (the other James)

(see above) – This James was also one of the apostles of Christ. He was the son of Alphaeus. Nothing much is known about him.

A third James who is well known was the half-brother of Jesus (Matt 13-55).  But until the crucifixion and resurrection of Jesus, this James was a scoffer who, with his brothers and Mother, tried to convince Jesus to give up His fledgling ministry (Matt 12:46-47).  That James: the half-brother of Jesus, was not an apostle, but became a disciple when he realized that Jesus was in fact the Christ, and is likely the author of the New Testament book of James.  Another half-brother, Jude (Judas) also became a devout believer, active in the church, and authored the epistle of Jude.

(Greek form of the Aramaic name Thaddai meaning “heart”.  In Hebrew, the name Thaddeus means “valiant; wise”.  In Greek it means “praise”) – Thaddaeus is mentioned in two of the four lists of Jesus’ disciples. (Matt 10:3, Mark 3:18). In the other two lists he is variously called  Jude of James, Jude Thaddaeus, Judas Thaddaeus or Lebbaeus. Nothing else is known about him apart from the mention of his names in the two lists.

(Greek form of the Hebrew name Shim’on which means “he has heard”, “obedient”, or “listening”) – This Simon is another disciple of Jesus. Sometimes called Simon the Canaanite (). He was a member of a party later called the ‘Zealots’ (Luke 6:15, Acts 1:13)

The Zealots were a Jewish faction, headed by Judas of Galilee, who “in the days of the enrollment” (compare Acts 5:37; Luke 2:1,2) bitterly opposed Roman taxation through the census of Quirinius, and Roman rule in general.  Their mini rebellions were often single-minded and bloody.

(Greek: Ioudas. In Hebrew the name Judas, a variant of Judah, means “praise” or “the praised one”. This name has become synonymous with “traitor”.) – This man was the disciple who betrayed Jesus. His last name ‘Iscariot’ is from the Hebrew word ‘Ish Kerioth‘ meaning ‘a man from Kerioth’, a place in the south of Judah (Joshua 15:20-25). He was the treasurer of the group and a thief (John 12:6,13:29). After his betrayal of Jesus, he grieved for his actions and committed suicide. (Matthew 27:3-5). He is always mentioned last in the list of apostles of Jesus.

(Greek: Matthaios, in Hebrew Mattityahu, the name Matthias, a variant of Matthew, means “gift of the Lord” or “gift from Yahweh”) – After Judas committed suicide over his betrayal of Jesus, the eleven remaining disciples selected Matthias as the twelfth.  They nominated two men: Joseph called Barsabbas (also known as Justus) and Matthias. Then they prayed, “Lord, you know everyone’s heart. Show us which of these two you have chosen to take over this apostolic ministry, which Judas left to go where he belongs.” Then they cast lots, and the lot fell to Matthias; so he was added to the eleven apostles (Acts 1: 20-26).  Little else is known of him.

There may not be much here you can use as small-talk at your next party, but I hope you’ve found some insight or enlightenment in this background information on the apostles of Jesus.