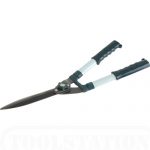 I’ve been considering buying a lithium ion hedge trimmer because keeping up with all the trimming that needs to be done using the giant scissors style trimmer is getting to be a real burden.  So I haven’t been doing it.  So things are over-grown.  And now I REALLY need a better way to trim.  Power cords are a pain on a large property and gas power is heavy and noisy.  Lithium Ion batteries are a big improvement over the older NiCad batteries.  That seems a viable solution. 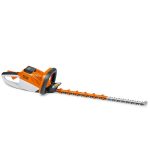 I was thinking about the bottom of their line Stihl battery powered trimmer.  But it’s $220 and says not to cut anything bigger than 5/16” with it.  It uses an internal battery that cannot be swapped out easily, and it’s heavy.

A friend loaned me his Black & Decker battery powered hedge trimmer to test out.  I used it yesterday, it did okay.  Would not cut stuff bigger than 1/4” or so, but powered through the smaller stuff and the 18 volt battery lasted around a half-hour.  Maybe a little more: I wasn’t timing it.  It was quiet, light, and easy to handle.  I was pleased.

I went on Amazon.com to see what the B&D lithium ion hedge trimmer costs.

The model Tim owns, and is happy with, has been replaced at least twice with newer models.  The current model: the LHT321FF is $89.00 and is equipped with a 20 volt Lithium Ion battery (which, incidentally, is the same battery my cordless drill uses, so they would be interchangeable if I needed to work a long time – like say an initial trim-up).  It’s rated to cut up to a 3/4” branch with it’s Power Command button, which switches the cutter action from a steady reciprocation to a punch and rest stroke.  It rates well: (currently) 82% of the 117 reviews are 5-star.

The model that the above replaced: the LHT2220, uses the same 20 volt Lithium Ion battery but does not have the Power Command button technology.  It does say it will cut up to a 3/4 branch (probably not hardwood) and because it’s on close-out is marked down to $67.00 from it’s original $85.00 price.  It also rates well and is listed as the Top Seller in this product category.  Features include: 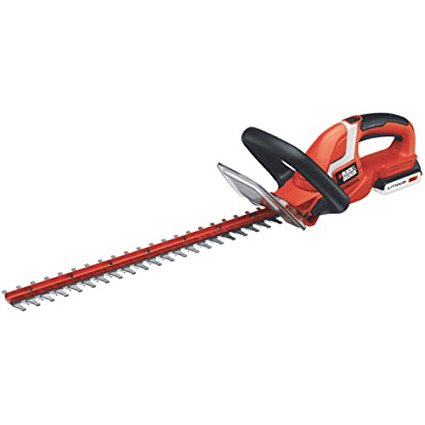 I did a product comparison, which identifies and displays other products by this manufacturer with similar features and similar products by other manufacturers in the same price range in a side-by-side table.  There aren’t many others in this price range.  That is often a red flag for me: that product may be junk if no one else is offering one in that price range.  But I’ve already tested a B&D trimmer (an older one with only an 18 volt battery) and the reviews of the newer ones are overwhelmingly positive.

I should mention that a “bare” version is also available for around $50.00.  This comes without the battery and charger, so if I wanted to use my drill battery on the trimmer I could get off even cheaper.  But I like the idea of having two batteries — and my drill is around 7 years old.  It’s still going strong, but …

Other brands start at just over $100 and go up over $300.  Some of these may be worth the extra money if you need an commercial quality trimmer.  I don’t.  And just for comparison, that Stihl I saw for $220 had a 36 volt battery but far less cutting capacity.  It may be that the Stihl is more robustly built and will run reliably for a lifetime.  Or it may be that I’m paying a premium price for a premium name and the products are not all that different.  I’ve always been happy with the Black & Decker tools I’ve bought.

Because we use Amazon Smile, my purchase will also result in a no-cost-to-me donation to Tennessee Valley Golden Retriever Rescue.

My lithium ion hedge trimmer arrived yesterday evening, so I tested it out today.

I was a little concerned that the 20 volt Lithium Ion battery in my Black & Decker drill is orange and white and the battery shown with the hedge trimmer is dark grey and orange: they may not be as interchangeable as I hoped. But: No Worries.  Both batteries fit both tools and both chargers, and neither one blew up when I put them in the other’s charger.  Always a good thing!

I found that the hedge trimmer will easily cut through branches up to about 3/8″ in diameter – unless they’re like, white oak or something.  The 3/4″ cutting capacity stated on the product listing refers to the gap between teeth, not what the trimmer will slice through.  So it will cut a 3/4 inch thistle or milkweed stalk, but not hedge branches. It *will* cut through softwood branches up to about 1/2″ but not all at once: it has to chew on it a bit.

I ran the trimmer with the new battery for about 40 minutes: doing some pretty heavy trimming too.  When that battery died I swapped the batteries and got another 25-30 minutes with my old battery, and lighter trimming.

When I was all done and both batteries were on chargers, I went down to fetch the mail and stopped in at my Mom’s house.  She commented on how quiet the new trimmer was.  I explained “That’s because it’s battery power, not gasoline.”  I’m sure all of our neighbors wish I’d switch to battery power in more of my grounds maintenance equipment!