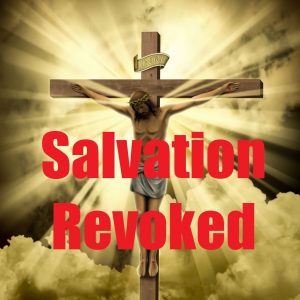 There is a school of thought (or church doctrine) which claims that if a Christian messes up they have to go back and get saved again, starting over from square one.  And if you drift away from the faith your salvation is revoked and you’re toast.

4 For it is impossible for those who were once enlightened, and have tasted the heavenly gift, and have become partakers of the Holy Spirit, 5 and have tasted the good word of God and the powers of the age to come, 6 if they fall away,[a] to renew them again to repentance, since they crucify again for themselves the Son of God, and put Him to an open shame.

When we look at this passage alone, it would seem to support the doctrine of revocable salvation.  Churches that hold this idea as a cornerstone of their denominational doctrine point to Hebrews 3:12-14 and 2 Peter 2:20-22 as support for this thought.  But it is always dangerous to pull a passage out of Scripture and wave it around to make a point.  In fact, there are four doctrinal teachings on this passage.  In addition to the one above, we have:

Those who fall away from the faith were never truly saved in the first place.  The fact that they fell away proves that their faith was not genuine.  Should these pretenders become genuinely convicted at a later date, they are ineligible for salvation.

However, the passage clearly identifies those who “have tasted the heavenly gift, and have become partakers of the Holy Spirit” as those being discussed.  Clearly not pretenders.

This thought puts forth the idea that it is not one’s personal salvation at risk, but the rewards that come both in this life and the after-life that are forfeited.

I don’t see any mention of rewards.

This thought purports that the author of Hebrews is not saying that salvation can be torn away, but that it is not possible to go back for a do-over.  If you stumble and fall into sin, you cannot go back and start over with a clean slate by being “saved” again.  This would require a re-crucifixion of Christ.  Our only option is to pick ourselves up from the muck of sin and carry on.  We must move forward, not backward.

The text supports this last thought.  Let’s go back and take a look at the book of Hebrews, what is being said, and how it relates to the scripture quoted above.

The book of Hebrews is written to a group of Jewish converts who were in danger of giving up and going back to Judaism because of the persecution they experienced for being Christian.  The first several chapters speak to the divine nature and purpose of Jesus who serves as our high priest and king.  (Side note: In the Hebrew culture, leaders were either a priest or a king, not both — except for Melchizedek.  This enigmatic leader was appointed directly by God to lead the ancient Hebrews and was afforded such honor that even Abraham gave tithes to him after winning a battle.  Jesus is said to be “of the order of Melchizedek”: a God-appointed priest and king.)    In 2:14-18 the author explains that in order for Jesus to be our High Priest, He suffered just as we suffer.  He suffered death in our place, becoming the propitiation (or appeasing sacrifice) for our sins and He suffered temptation just as we are tempted.  In this instance, the temptation would be that to give up because of persecution from outsiders and resistance from His audience.  Jesus began His ministry being tempted by Satan in all ways for 40 days.  He spent the next three years dealing with oppression from Jewish leaders, resistance from his audience, and disbelief even from His own disciples.

Chapter four speaks of the fact that there is a time for rest, but that time is after the work is done.  Just as those who God brought out of Egypt died in the desert for refusing to go into the Promised Land, the author of Hebrews admonishes, “Today, if you will hear His voice, do not harden your hearts.” (Heb. 4:7b)

Anyone who sits down during the race, does not finish the race and receive the reward.  This spiritual race is not a 100 yard dash, but a marathon — or more accurately, a relay-marathon: for each of us will run our leg and be expected to hand our faith off to another (several others actually, but that muddies the analogy) to carry on toward the eventual end of the event.  If we give up, how many others never get the chance to run?

Hebrews 4:15-16 reiterate that Jesus is our High Priest who sympathizes with our weakness because He too was tempted in all points as we are tempted.  So we should come boldly to the throne of grace in our time of need.

Then the author launches into an admonition of his reader’s failure to grow in their faith.  He states “For though by this time you ought to be teachers, you need someone to teach you again the first principles …” (Heb 5:12).  Essentially, these people did what some do today: they got their Get Out of Hell Free card, then sat back and did nothing more.  The burning issue at this point of his letter is complacency.

If Hebrews 6 says that those who fall away lose their salvation and cannot be restored, what then is the true meaning of the parable of the Prodigal Son?  For this story is always preached as a son (full family member) who rebels against his father, takes his inheritance, goes to a far place, and squanders it.  When he realizes the folly of his actions, he repents and comes home – and his father receives him joyfully, and gives him clothing and a signet ring of the family.  There will be a price to pay: for the elder son is now the father’s sole heir, but the younger son is still a family member and welcome in the family home.  But, let’s not place too much emphasis on a parable.  What else do the scriptures say?

Romans 8:37-39 states that nothing on this earth or in the heavens can separate us from the love of God.  In John 10:28 Jesus states that no one can snatch his lambs from his hands.  John 10:12-13 says if we receive Jesus, we are born of God.  Romans 11:28-30 states that the calling of God is irrevocable.  And John 6:36-39 records Jesus telling his disciples that those who are given to Him by God, He will by no means cast out, and they cannot be taken from him.

If we stumble and fall into sin after we are saved, we cannot go back to the starting line for a do-over, and we must not just sit in the dust and await the end.  We must pick ourselves up and press on from where we are.  And we are to run with diligence (purpose).  For God does not forget our labor of love because we stumble.  In fact, through His grace: He forgets the stumble once we’ve repented!

If we are persecuted for our faith, we are not to crawl into a hole and hide.  We are the hands, feet, and mouth of Jesus.  We are to continue the works that He did in His day, in our day.  God has prepared works for us to do, we are to do them.

Hebrews 6:11-12 says, “And we desire that each one of you show the same diligence to the full assurance of hope until the end, 12 that you do not become sluggish, but imitate those who through faith and patience inherit the promises.”

There is only one instance in which I can see (through scriptural teaching) that one’s salvation might possibly be lost, and that is when a believer turns antichrist.  Not just a backslider,  not just “sluggish” but actively teaching against Jesus.

However, nothing like that is mentioned in Hebrews 6, so we’ll look at that in another study.