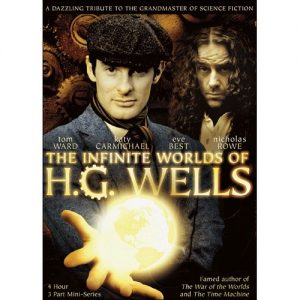 If you like Doctor Who and Young Sherlock, you’re sure to like this solid Sci-Fi romp through the novels of H.G. Wells.  Even if you’ve never read his novels, this four hour, 3 part mini-series from the Hallmark Channel will delight and amaze you.

The tale opens with a reporter (played by Eve Best) coming to an aged and highly successful Wells’ home to interview him about the inspirations behind his most successful books.  Reluctantly, Wells (played by Tom Ward) begins a tale of adventure, romance and mystery which begins when he was a struggling pulp writer haunting the local university laboratory for inspiration.  And what inspiration he found!

Each of the three segments in the series is comprised of three or four tales, each woven into the overall story line, and each purports to be the inspiration for one of his books, but in each case, the truth behind the book is even stranger than the book it inspired.  If you are familiar with the works of H.G. Wells you will recognize the stories, but this is a bonus; this familiarity is not required to enjoy the series.

In time Wells discovers that the reporter, Ellen, is not a reporter at all and coaxes her to reveal the true reason behind her visit.  If I tell you about that, I’d spoil a lot of the move for you.  Suffice it to say that the strangeness just keeps building as events in the present spur memories of his past adventures.

One strong theme throughout the overall story is his courtship of scientist Jane Robbins, (Katy Carmichael); this is a timeless love story that forms the core of the series, but does not dominate it.

The acting is solid, the dialogue engaging and witty, the special effects are quite good, period details accurate, and the musical score is excellent.  While the story employs tension and suspense in places, it never wanders into the horror end of the Sci-Fi spectrum.  In fact, each vignette and the overall story itself ends in a satisfying manner.  Even the one with the crystal egg and Mrs. Cave ends in a way that seems just, if not pleasant.

The entire mini-series is on a single DVD, so it can easily be played through, beginning to end, if you have four hours to wile away on a weekend afternoon.  Leaving and returning another time to continue the story is not quite as easy as it could be because of the menu structure of the disk.

The series is not rated, but I would declare it to be family friendly, with no objectionable language, no nudity, and any violence is well contained within the story.I found it to be a fascinating exploration of scientific boundaries and possibilities, a touching tale of love and devotion, and a humorous look at the foibles of human beings.  The episode where all of London is forced against their will to tell the absolute truth in every circumstance is particularly humorous and, probably, accurate!

Split it up or make a day of it, you will enjoy this Victorian yarn of science and fantasy.  The Infinite Worlds of H.G.Wells is a dazzling tribute to the grand master of science-fiction.

One thought on “Movie Review: Infinite Worlds of H.G. Wells”

Sky Captain and the World of Tomorrow