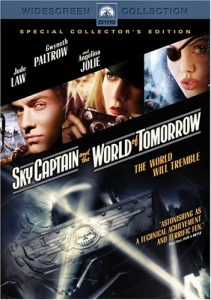 This American pulp adventure, dieselpunk film starring Jude Law, Gwyneth Paltrow, Angelina Jolie, and Givanni Ribisi, written and directed by Kerry Conran is his directorial debut.  The action is fast, the dialogue terse and witty, and the characters are larger than life. The script is very well written and, of course with this cast, the acting is excellent.

Jude Law is the almost superhero, millionaire, mercenary aviator Joeseph “Sky Captain” Sullivan who is called upon to save New York City when it comes under attack by giant robots.  Giovanni Ribishi is his brainy scientist/inventor side-kick, Dex.  Gwyneth Paltrow is the old-flame, spunky newspaper reporter, Polly Perkins, who gets pulled back into Joe’s life when she is contacted by a German scientist who is fleeing a mad genius named Totenkoph (Lawrence Olivier) who is bent on destroying the world.  He gives her information vital to Joe and Dex’s quest to find out where the robots came from and what they are after. This mission takes them all over the world and causes them to enlist the aid of Captain Franky Cook (Angelina Jolie), who also has a history with Joe. When they finally ferret out the mad genius and his secret World of Tomorrow, what they find is more surprising, and sinister, than any of them had dared imagine!
Conran spent four years making a black and white teaser trailer in his living room using a Macintosh IIci personal computer. Through a friend of his wife, he was able to show it to producer Jon Avnet. Avnet was so impressed with it that he spent two more years working with the aspiring filmmaker on the screenplay. When no major studio showed interest in financing such an unusual film with a first-time director, Avnet convinced Aurelio De Laurentiis to finance Sky Captain.

Nearly 100 digital artists, modelers, animators and compositors worked together to create the multi-layered 2D and 3D backgrounds used for the final live-action footage.  The entire movie was sketched out via hand-drawn storyboards.  Three editions of the movie were produced by Conran – one with a stand-in cast and two in low-res animatics – before it was re-created as computer-generated 3D animatics. This preparedness allowed Conran to work out the technical difficulties beforehand and is credited as being the main reason they were able to shoot the entire film in 29 days.

Sky Captain is notable as one of the first major films to be shot entirely on a “digital backlot”, blending live actors with computer generated surroundings. The Special Features included on the DVD goes into detail about how this was done and the challenges to the actors who had to perform their parts in a huge empty room, interacting with people and objects that were not there.  Conran used his low-res animatics to show the cast what their parts should look like and what would be going on around them – they took it from there.

The movie is rated PG for Sci-Fi violence and brief, mild language, but we would deem it as family friendly.  So pop up a big bowl of popcorn, grab some sodas and settle the gang in for a great Saturday afternoon of Sci-Fi fun with Sky Captain and the World of Tomorrow!

Sky Captain and the World of Tomorrow is available on DVD, Blu-ray and as Instant Video from Amazon.com.  Here is a trailer:

2 thoughts on “Sky Captain and the World of Tomorrow”