Marie and I were sitting on the front steps this afternoon watching the birds at the bird feeder. Marie commented that she put some gourmet bird food (includes nuts) in the feeder, she was surprised a squirrel hadn’t camped out on the thing.

No sooner were those words out of her mouth than a squirrel came hopping along the ground through the trees. He hopped up and climbed the metal pole the bird feeder hangs from and began to chow down. I went out and chased him off.

Marie said, “I should put some cooking oil on the pole.”

I could do one better. I went to the shop and came back with a tub of wheel bearing grease. Using a paper towel I rubbed a good coating over the entire pole, including the top and the arched arms that reach out to either side.  That won’t wash off in the rain.

That squirrel came back in a bit. He wasn’t too sure about the smell, but eventually he tried it anyway: (leap) ting-ting-ting, fwump, (scamper)

He ran about 7 feet up the trunk of a large tree and glared at us, his tail whipping about madly.

He ran on up the tree and out a branch toward the feeder, onto a smaller branch, and a smaller one that bounced and swayed inches above the feeder pole. He reached out to grab the arched arm … slipped off and would have fallen to the ground if he had not still had a good hold on the branch with his hind legs.

He ran back up to the trunk of the tree and was not seen for a while.

When he returned, he was sauntering across the driveway toward the truck,”La dee da dee dum dee dee, pay no mind to me.  I’m not after any thing, just listen to the birdies sing.”

Marie said, “He’s going to let the air out of a tire.” I chuckled.

The squirrel went under and climbed up into the suspension of the truck next to the left rear wheel, with a clunk – thunk sound.

I said, “You’d better check your brakes really well before you start down the driveway tomorrow morning.” Marie chuckled. 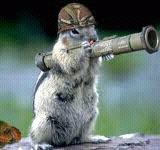 After the squirrel had been up in there a minute or more I decided it might not be so far from the truth and walked out toward the truck to bang on it. As I reached the tail gate the little vermin jumped down from the right rear wheel and ran off into the woods. I pursued as far that the edge of the driveway and watched to be sure it kept going.

I think I’d better check-out the truck real well in the morning before Marie heads out – he may come back with friends tonight!