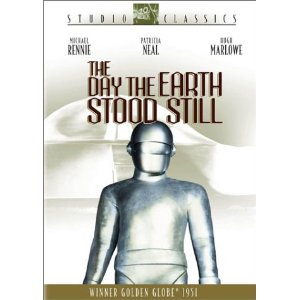 The original The Day the Earth Stood Still, made in 1951 starring Michael Rennie, Patricia Neal, Hugh Marlowe, Lock Martin, and Frances Bavier, has become more than a classic, it has become an icon of classic Sci-fi.  This is a bit odd because the movie does not contain any of the usual hallmarks of early Sci-Fi: no massive explosions, no creepy monsters, no flying saucers whizzing around destroying things.  This film made its mark because of superior writing and some truly memorable performances by the cast.

To be clear, there is a flying saucer; but it lands on a park in Washington DC and stays there (in a very unthreatening manner) throughout the movie until its departure at the end.  There is a fairly fearsome robot that could be considered the “monster” of the film except it does not go on a rampage; its role is purely defensive.  And there is an alien, but he’s not some tentacled monster with eight eyes.  In fact, once he gets out of his space suit he is able to walk around the city unnoticed because he looks so human.

The premise of the story is that the alien, Klaatu (Michael Rennie) and the robot, Gort (himself) came to deliver a message to the human race.  This message is to inform humanity that they are not alone in the universe.  Since mankind is poised to push out from its own planet and into space, Klaatu was sent to welcome them into the realm of spacefaring peoples… and to inform them that there are some rules.

Naturally as soon as the saucer lands the military surrounds it with battalions of tanks and artillery.  When Klaatu exits the ship his actions are misunderstood by a trigger happy soldier who shoots Klaatu, wounding him.

In order to accomplish his mission, Klaatu must engage in some skullduggery while hiding among the humans as a human.  He befriends a woman (Patricia Neal) and her young son, and earns the ire of the woman’s boyfriend; a greedy and ambitious man.

The entire plot is driven by the real-life paranoia spawned by the cold war and nuclear bombs.  There is little action in this movie, but plenty of tension and interest created by the interplay between the characters.  These characters are what make this such a timeless classic, and it is well worth watching even today. 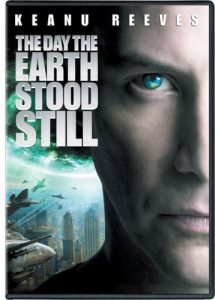 Again, Klaatu takes on human form and comes to deliver the message.  This time the warning is not against violence but environmental destruction.   The high budget special effects are eye-popping, especially once the mayhem is unleashed.  In this movie, these special effects are the main selling point, for the actors are far less memorable than the originals.

Again the movie makes a valid point about the world we live in, but it becomes easy to ignore under the glitz of the special effects and the B-movie grade dialogue.

As might be expected, the 2008 version is less suitable for viewing by the whole family, especially those with young children.  It gets pretty intense in places.

You may scoff at the effects used in Wise’s 1951 The Day the Earth Stood Still, but that movie was a masterpiece of polished dialogue and film making.  If you live for flashy effects, choose the 2008 version, if you want quality, family friendly entertainment, grab the 1951 version.  Either way, pop up a big bowl of corn, grab some soda and settle in for a great Saturday afternoon of Sci-Fi fun.

One thought on “The Day the Earth Stood Still”