Mya is a sweet, affectionate girl.  She is well behaved, in a cattle-dog sort of way. While Mya was staying with another foster family, one of their dogs started attacking Mya.  To avoid injury and inciting similar behavior in her, she was moved here.  My job is to be sure she hasn’t been traumatized and keep her safe until transport.

Mya is a cattle dog, so she jumps and nips.  I will work at teaching her to restrain these impulses.  Her former foster family included at least one child: a boy 8-10 years old, who obviously adored Mya.

In roughly chronological order, newest at the bottom.  Click the thumbnails to enlarge.  Some pictures are linked to Doggy Tales about Mya, click those to open the related story or video. One of our current foster dogs has gone out to seek her fortunes in the world.

Babes, a 48 pound cattle dog has been staying with us for treatment of heart worms, but she is fully recovered and healthy once again. Babes is bright, energetic and playful. But she also likes to curl up and be petted. She craves attention! When we would approach her pen she’d leap so high into the air that thought she must have wings! She had some jealousy issues when she first arrived, but we worked on that and she and her foster brother Smokey became the best of friends, so eager to play together that they were working on a tunnel under the wall that separated them.

This little gal loved playing Tug-O-Rope. But it was never about getting the rope away from us, for as soon as she’d “win” she’d prance around a little, but then run right back to say, “Again, again, lets play again.”

Babes was sent on a Rolling Rescue run from the Dr. Carol Hood Memorial Animal Shelter, who had fostered her out to us, to 11th Hour Animal Rescue in Rockaway New Jersey so she could participate in their largest adoption even of the year. Babes is so filled with personality, I’m sure she will be adopted quickly. She’d be a terrible apartment dog, but for anyone with a yard where she could run (and leap) and play, she’d be a perfect pet. She showed no tendency toward destructive (chewing) behavior. In fact she is one of the best we’ve hosted in that regard. She did like to bite on her ropey toy, but not in a way that tore it up, just mouthing it. Ropey toy’s don’t last long with most of these dogs, but Babes’ toy is still in great shape.

Below is a little video farewell to our Babesy girl.

Babes Meeting the Bus from Doug Bittinger on Vimeo. 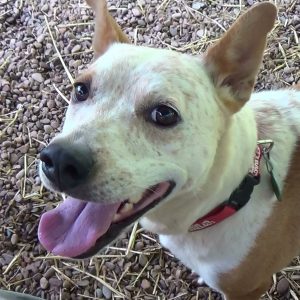 Babe is a doll-face of a dog.  A cattle dog, she is highly energetic, but rarely hurtful.  She can jump higher than any dog I’ve come across, Babe the Amazing Flying Dog!

One of our current foster dogs has gone out to seek her fortunes in the world. Babes, a 48 pound cattle dog has been staying with us for treatment of heart worms, but she is fully recovered and healthy once again. Babes is bright, energetic and playful. But she also likes to curl up and […]

This is a foster dog diary post. Updates will be added to the end of this post rather than as a myriad of separate posts so all information on Spencer is right here and in chronological order. This should help potential adopters and rescues easily learn about this dog. Last updated: February 20, 2017 Spencer […]

After seeing Marie off to work I left Blondie Bear and Cochise on guard at the house while I went to spend some time with Babes and Smokey, our foster dogs. After that I went to do the daily gardening chores. There wasn’t much of that to do and it didn’t take long. When I […]

Smokey is a sweet playful fellow with markings like an Orca whale. Unfortunately all but this photo and all the details on his stay with us crashed and burned as we flew them through cyberspace to relocate them. These articles mention Smokey and survived the move: Search Results for: Smokey Dog Bath Day: When and […]