Sonny was one of three dogs taken in by Piney Mountain Foster in an emergency situation to keep them from being shot by a “neighbor” whose rabbits were killed and he accused these three. Sonny and his litter mate, Cher, behaved in a bonded manner with Cher taking the dominant roll and Sonny the recessive. He was very shy and reclusive until Cher moved on. He has since blossomed with a personality of his own. 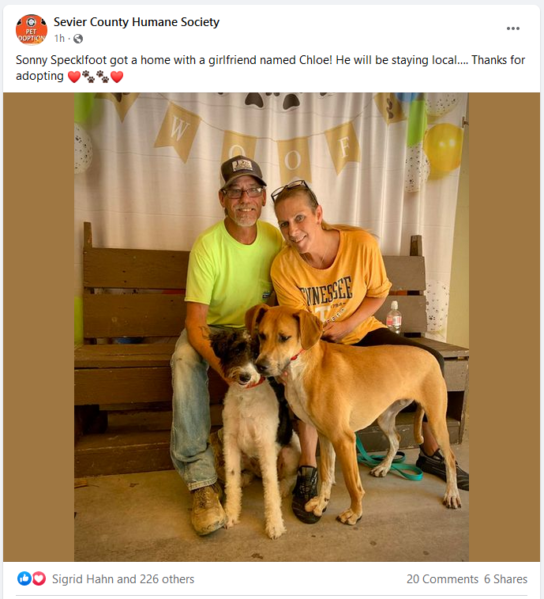 Detailed notes may be available below photo gallery.

If you are interested in adopting Zane, complete the application form.

Zane was one of three dogs dumped on Piney Mountain Rd and accused of killing a residents rabbits. Reaction included gunfire. To keep them safe, PMFC built an emergency shelter and took them in. Zane’s companions were a pair of 9 month hound pups: friends but clearly not relatives.

Zane tolerates The Children’s (his hound companions) rambunctious behavior but does not enjoy it. Sometimes they gently mouth-wrestle, he likes that. He does not like being dirty, and seems to want to be indoors. He may have been a house dog.

Zane tested positive for heartworms on March 11, 2022. It was a STRONG positive, so a microscopic exam of his blood was done confirming that his count is exceptionally high. The Vet Nurse warned that he may not be savable.

On March 15th we went in again and had chest x-rays done. His heart was NOT enlarged and no serious lung damage was seen. That was encouraging. We started him on Doxycycline and Prednisone, the first step in treating the heartworms.

Zane received his first Immiticide injection on April 25th, and he tolerated it quite well. Another 3 weeks of Prednisone to reduce inflammation in the lungs.

His 2nd and 3rd injections were done on May 24th and 25th. This left him feeling sick and sore for a few days. I tried bringing him into our house, but he just whined and fidgeted. When the other House Dogs came to say “hello” he warned them off – not being mean, just a low growl to let them know he’d prefer to be left alone. He was in pain and in an unfamiliar place. When I took him outside to potty he went straight to the gate that leads to The Guest Cottage and said, “I want to go back to MY house.” I moved his crate back in there so he’d be more comfortable.

Zane will be going back to Cedarwood Veterinary Hospital on June 22 for a blood test to check for HW microfilaria. Until then I must keep him from getting overactive. He is on crate rest and leash walking while in recovery to prevent dead worm tissue causing an embolism in his lung. A bad embolism would cause him to drown in his own blood.

That blood test revealed a very low cunt of microfilaria, but they ARE still there. He gets another dose of Heartgard in a couple of days, that will take care of those. Another blood test is scheduled for next month.

Zane passed a blood test in August and was neutered. He is now available for placement.

Zane is quite gentle on his bedding and toys. He is especially fond of plush toys, which he treats like his “baby”: carrying it around with him and licking it. He also likes getting spiffed up for a photo shoot. We have many more photos and videos of Zane on our Facebook page.

If you are interested in adopting Zane, complete the application form.

Zane’s treatment and recovery is complete and he is available for adoption or rescue pull. This page probably won’t get major updates until he is adopted. But if you want to receive updates, subscribe.

Born through a disreputable breeding practice, this Double Merle Aussie girl has had a rough time in her short life so far.

One of three puppies born from the breeding of two Merle Australian Shepherds, all three had issues with hearing and eyesight. The breeder surrendered the pups to a local rescue. Sevier County Humane Society pulled the pups from the rescue and reached out to Piney Mountain Foster for help with the two who were deaf. We contacted A Pathway to Hope in New Jersey, and they agreed to take them. The third pup, Ariel, was adopted out. She was returned several months later with a lame excuse as the reason. It is clear the adopter did not train the dog and when the cute, bouncy, nibbling ball of fluff got to be 35 pounds she was no longer “adorable”. We see this all the time. She was abandoned because she did not train herself.

4Health Puppy kibble mixed with one Pedigree Pouch, fed morning and evening.
She gets a variety of treats through the day as rewards for obedience.

Ariel is not completely deaf, she responds to barking dogs and closing the front door hard it will wake her from a sleep. The floor is concrete, I don’t think she’s feeling vibrations. But she does not seem to be able to hear me speaking or calling her. Maybe she chooses not to hear, it’s hard to say.

Ariel navigates the Cottage and the play yard just fine. The way she throws her forelegs out in front of her when she runs makes me think she is visually impaired – especially in the left eye. She may lack depth perception, but can see well enough to get along. Both pupils are irregular. Vision may be distorted.

Ariel is smart and she does train. But one must find a way to communicate to her what you want her to do — and to get past the flighty, rowdiness that she still engages in since she still thinks she’s a little puppy.

She approaches all of my dogs with a submissive, almost pleading attitude, “Please be my friend”, even the dogs, sometimes especially the dogs, who are yelling at her that she doesn’t belong here. I have not seen her respond in aggression to any other dog. She has found a good friend in Zoey (female Husky) and they play well together.

When I get a second handler out here I will test her with other dogs in open play. Many times a dog in a kennel will harass a roaming dog when they will not behave that way if both are free or the roles are reversed.

More will be added as care and training progress. To receive notices of updates subscribe below. It’s painless and you can unsubscribe any time you want. Your e-mail address is used ONLY to deliver post notices. That’s a promise!

Found running loose and picked up by a good Samaritan, Zoey is starting life over.

Zoey was found running loose along with a 13 week puppy. Maybe her puppy, we don’t know. Both are Husky. A kind lady picked them up and took them to City of Newport Animal Control to check for microchip and publish Found Dog notices. No chip. No one claimed them. So they both came to Piney Mountain Foster Care for fostering while awaiting transport to A Pathway to Hope rescue in New Jersey.

Zoey is promised to A Pathway to Hope in Hawthorne NJ. Please contact them regarding adoption. We are happy to answer questions about Zoey’s health and history, since we know her best.

Zoey has been successfully transported to New York state where her foster-to-adopt family welcomed her into their home. They have kindly sent several pictures and descriptions of her settling process. I think this one says the most. This is Zoey’s new sister, Luna, showing Zoey around the place. Zoey is both enthralled with and intimidated by the pool. So much more exciting than the big box of water she enjoyed here!