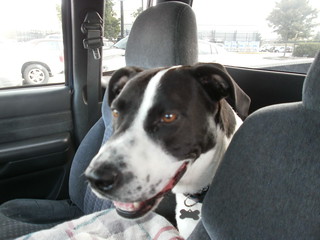 Hello, my name is Cochise. I am an American Bulldog. Well, mostly American Bulldog; I’m not a purebred, but close enough as long as a certificate isn’t important to you. I was picked up by the County Animal Control officer because I was living free and easy on the streets of Newport Tennessee. I had a home once, but… well… maybe I’ll tell you about that another time. For now I want to tell you how a couple of good people rescued me from certain death.

See, when I was brought into the local animal shelter I tested positive for heart worms, that made me ineligible for the national Rolling Rescue program, which would have allowed me to be adopted somewhere that good pets are not so plentiful, and the prospect of local adoption was getting slimmer by the day. The shelter cannot keep dogs forever. I was on death row – with just days to go before it was my turn to take the one-way walk.

Clear across the county, Hairy Face & Nice Lady wanted to do something to help homeless animals. Nice Lady found information about the dog fostering program on-line, became interested, and discussed it with Hairy Face. They came to the Newport Animal Shelter to talk to the administrator: Brandy (a very nice lady) who is enthusiastic about the program and was very grateful that Lady & Hairy were willing to help.

There are two ways the program can help dogs like me. One is for a patron to sponsor a dog; the patron pays the cost of medications needed to restore health so the dog is eligible for Rolling Rescue – or is more adoptable locally. The other way is to foster a dog: provide living quarters and the loving care the dog will need during the treatment process, the Animal Shelter will then provide the medication and food. In my case, sponsoring me would have cost about $175 and I’d continue to live in my cage at the shelter: not the most nurturing environment for a dog to go through what I will have to go through to be cured. Fostering means providing a secure pen, a sleeping shelter, food and water dishes and a commitment to seeing to my needs during my treatment. They chose to foster and bought a sturdy 10’x10’x6’ chain-link pen at Tractor Supply. They worked all afternoon – in the rain – to set it up and build a sleeping shelter (Hairy called it a Wickiup because they had already decided I was the dog they would foster and I’m named after an Apache Chief). Lady came back to the Animal Shelter on her lunch break the next day to transport me home.

I’ll spend the next month on antibiotics to help prepare me for treatment. My Peoples have to be careful not to let me get too excited and damage my heart. They take me out for a walk on a leash in the cool of the evening. They have to be careful on the slopes and uneven ground here because although I am not a really big dog, I am a powerful walker – a trait of the American Bulldog – and can easily pull someone off balance. 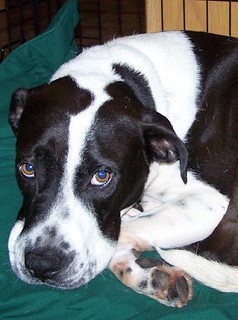 I don’t like to think about what will come next, but it must be done or I will die from the heart worms. I’ll get a couple of injections at the Animal Shelter; one each day for two consecutive days. These will be painful; deep in my back muscles, and will leave me very sore and irritable. This is the medication to kill the heart worms. It will make me sick too; I’ll feel terrible and run a fever as the worms die. I’ll need to be kept in a crate: I’ll need complete rest, in a cool environment and given nearly constant attention and observation. Dead heart worms will pass downstream from my heart – into my lungs. Here they will clog capillaries until my body can absorb them. If there are too many, they may cause embolisms and bleeding in the lungs.

But if all goes well the worms will be eliminated, my heart muscle will repair itself, my lungs will clear up and after a period of convalescence I’ll be a healthy, happy dog again and will qualify for adoption by a loving family. Maybe my people here will adopt me; I think I’d like that. It’s nice here, and I’m quickly coming to love these peoples.

A Little History on American Bulldogs

American Bulldogs are an exceptionally good breed for pets, you know. And we’re rare. Our breed almost died out – would have too, if not for the breeding programs of John D. Johnson and Allen Scott. Because of them the breed was brought back from the brink of extinction. The American Bulldog was recognized by the United Kennel Club in 1999 in the Rare, Working Class.

Our masters often use words like “true grit”, “true devotion” and “true love” to describe the American Bulldog. We are a hardy, athletic, all-purpose breed of working dog. We make loving family companions; we are good with children and other pets, yet at the same time, are fearlessly determined. We’ve been known to display heroic acts of courage in protecting our masters. We’ve also been used to hunt everything from squirrel to bear, and have been trained to drive cattle and guard stock from predators.

We Bulldogs originated in England as working dogs who drove and caught wayward cattle and guarded their masters’ property. At one time, the breed was used in the grueling sport of bull baiting. With the outlawing of that sport in England in 1835, the original type of Bulldog disappeared from Britain and was replaced with the less athletic dog you now know as the English Bulldog. Yet the original Bulldog was preserved by immigrants who brought their working dogs with them to the American South.

As you can see, I am a noble dog, with a noble history. And once I’m cured of these wretched heart worms, I’ll make someone a very loving pet.

I have to go rest now, but I’ll check in again as I can to let you good people know how I’m doing. In the mean time, if you’d like to know more about the dog fostering program check out the Dogs In Danger web site… please?

4 comments on “The Rescuing of Cochise: An American Bulldog’s Tale”