Picked up as a stray by Animal Control, this poor boy has obviously been mistreated

Brought to the Friends Animal Shelter of Cocke County by Animal Control, he was frightened and defensive.  Most could not go into his kennel to clean.  A shelter staffer, Autum, broke through his defenses and helped him be more accepting.  Autum is my hero!  she saved this beautiful boy’s life.

Blade is still at the shelter.  He is not adoptable right now because of his fear and bad attitude.  I’ve been going in a couple days a week to work with him and have made some headway, but Autum has been amazing with him!

A rescue said they would pull him, but then backed out.  So he is again in need of a solution.  I’ve committed PMFC to taking him so he doesn’t get euthanized.

I went to visit Blade again.  Autum has made great progress with him, he knows “sit” and “paw”, and will walk on a leash with her.  He found that he HATES hats and loves Vienna Sausages.  We have another dog in care who also hates hats because his former owner would take off his baseball cap and beat him mercilessly with it.  Maybe something similar happened to Blade. 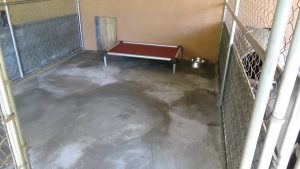 Friends Animal Shelter is supposed to be bringing Blade out to PMFC in their van with Autum riding with him to keep him calm.  His room is ready and we are all excited to have him in residence where I  can spend much more time with him.

And I have a supply of Vienna Sausages laid in for him!

We’ve been making some great progress in getting Blade to be more comfortable with Doug.  He LOVES Marie and lets her do anything she wants with him.  What got Blade to loosen up some was when Doug would go out into the yard with Marie and Blade and get Blade to play.  Blade like to play a game we call, Lunge, Snort, Run.  He acts fierce, but when Doug repeats the behavior runs off to do a lap around the yard.

Blade has gotten to where he expects me to play The Game with him every evening.  He does seem to enjoy it and it encourages him to run himself to exhaustion.  That helps him get in shape and he’s ready to go back to his room and rest when were done.

Marie and I took Blade for a truck ride the other day.  Marie got in the passenger seat and I led him out to the truck.  To his credit, he loaded right up into the extended cab.  He rode well, looking around, occasionally poking me in the ear with his nose to say, “Faster, Doug,, faster.”  But we were just going on a 4 mile jaunt around the block and our twisty, bumpy mountain roads do not lend themselves to high speed travel, so I took it easy to avoid stressing The Big Guy out by bouncing him around back there.

He was reluctant to get out when we got back home, he wanted to ride some more!  This was a practice run.  We’ll take him to the park-n-float park for an outing next, then we’ll take him in for neutering.  That will have to be done at Friends Animal Shelter so Autum can help move him around to get him to and from his surgical procedure.

Blade is really good about holding his bodily functions until he is let out into the yard, so we let him out first at breakfast time.  In the beginning he would rush out into the yard, run a few laps and mark a few trees until his bowels were ready, take care of that, then run to his room to eat breakfast.  But lately he has made the morning run into something unique: 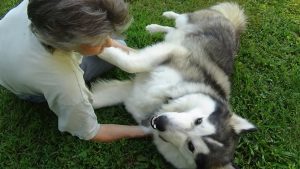 And in the evening, there’s nothing better than a belly rub in the grass from his favorite person after a rousing game of Huff-Snort-Run with that other guy who he sorta-likes — sometimes.

Blade s still devoted to Marie and will do anything she asks.  He loves playing The Game with me in the evenings and he’s doing better at letting me pet him.  Sometimes.  Sometimes he just refuses.  It’s not aggression at all  – more playful refusal.  But it is refusal to comply with my instructions.

Blade is becoming more compliant with me.  More often than not he will agree to being bribed back into his room after a play session — so he’s getting more play sessions.  He likes that.

Today is the day we’ve been building for, planning out, and praying over for long time.  Neuter Day.  We have taken Blade for a truck ride before, and he enjoyed that.  He trusts Marie and Autum and is compliant with them.  Less so with me, although that has improved vastly in the last three days.  Blade was NOT happy about getting no breakfast this morning, but he agreed to get into the truck as long as Marie was going along.

When we got to the shelter where the mobile vet clinic was working today, Blade got nervous.  He does not like the shelter, he was confined here for far too long.  SO we stayed as far away from the kennels as we could.

Marie and I held him and distracted him while the vet tech gave him the first shot (in his butt, to relax him).  That went unusually well.  Then Blade and I sat in the back of the truck cab and I petted him and assured him that everything was okay.  He was getting drowsy, bur refused to lie down. 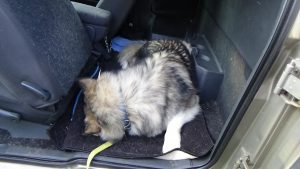 15 minutes later Crystal came again with the IV anesthesia.  Again I soothed him and held his head while she found a vein and injected him.  Again, it went unusually well.  This big bad boy is usually pretty combative about letting anyone touch him.  Moments later, “fwoop” he was on the floor, out cold. 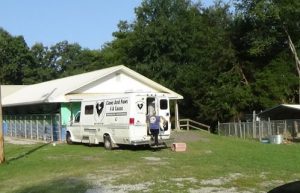 Crystal scooped him up and carried him into the mobile vet clinic.  While he was having his surgery, Marie and I went to do a SAFER test on Siri, our next intake.  Just as we were finishing that up, Crystal poked her head in the building and said, “He’s waking up, you want to come get him?”

I pulled our truck over behind the mobile clinic.  Crystal tried to scoop him up, but he was awake enough to be having no part of that.  “Uhh  … do YOU want to try this?”  I sidled in and encircled his chest, sliding him out of  the door, Crystal got hold of his hips and we moved him gently over into the truck.  He was pretty groggy yet.

We got him home without incident, but he was still too woosy to want to jump down out of the truck, and was not willing to let me “help” him down.  So we waited. 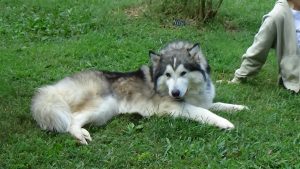 When he was ready, he got down and staggered back into the play yard.  But instead of going to his room, he insisted on going out to lie in the grass.  Marie stayed with him while I unloaded the truck and got him some ‘breakfast’, which he snarffed down

Since then, Marie and I have been taking shifts sitting with him to console him and keep  him from licking  his incision.  Later on I fixed a 6″ pizza for him that we’ve kept in the freezer.  I cut it into wedges and hand fed the whole thing to him.  He enjoyed that and has been glaring at me less since then.  I hope to get back into his good graces soon, because we need to get him out and socialized better so he can transport and go find a forever home.

Blade is letting me work with him again, and is complying with my requests in his own, Bladely way.  Bribery helps.  Blade likes playing with Blondie Bear.  He’s pretty spry for a fella who just had his nads removed!

Blade was mad at me this morning.  Breakfast was 2 hours late because Marie was sleeping and if I left the house Buddy Beagle would be screaming at me from the window that is right next to Marie’s side of the bed. Not conducive to rest.  So I fed the inside dogs (and me) and the outside dogs had to wait until she got up to check her numbers. My plan was to slip out and do this quick so she could get back to bed.  Blade had other ideas.

He ran around for a while, swinging by long enough to yell at me (he’s LOUD when he does that) then run off again.  I thought maybe he wanted to play, so I went out and chased him around a bit.  But an old dude, who is brain-dead from lack of sleep, running around on a grassy slope, in the rain is a recipe for painful injuries.  So that did not last long.

I went back to standing by his door with his cookie and trying to not look at him, just stare off some place else like I don’t even know he’s there (but able to keep tabs on him in my peripheral vision.  He’d come charging up, yell ferociously at me, sometimes bouncing his front end up and down for emphasis, than stalk off for a moment.  And repeat.

I told him, “You’re the one in the rain getting soaked.  Your tantrum isn’t affecting me: I’m nice and dry under this roof.  Come get your cookie so you can dry off.”

He kept yelling.  I finally understood what he was yelling about.  I had disturbed his sleep when I brought Helo out to his kennel at 1:15 AM so we could leave.  Helo probably yelled and howled most of the time we were gone, further annoying Blade.  We got home about 4:00 I came out and retrieved Helo (who stood up and pounded me on my back in his own anger at me for leaving him) but did NOT bring breakfast, as Blade thought I should because his sense of time was messed up.  So when I finally brought him breakfast, he thought it was lunch time and at lunch time he always gets a Vienna sausage as his reward for a successful potty run.  I was offering him a mere cookie.  A COOKIE!  How ARE I?

So I went inside and got a sausage.  I showed it to him and Blade went right in his room and I secured his door. I wish he’d explained that earlier!

Smokie Archound (Archie for short): Notes on a foster dog