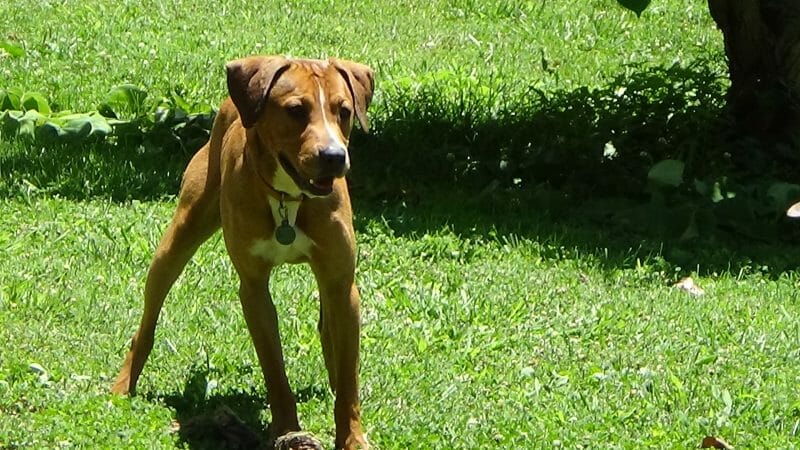 Rocky was the alpha (dominant) in a bonded pair of brothers. He spent nearly all of his life in a shelter and was skittish around people. He needed socialization, and release from his roll as his brother’s keeper. This has been achieved. Rocky was one of 6 puppies and their mother who were owner surrendered to Newport Animal Control because the original owner went to jail, the owner’s father didn’t want the dogs and his mother could do nothing with them because the mother dog became aggressive after she gave birth. All of the dogs were adopted out, Blaze and Rocky together, but were returned because they were kept outside and they barked, causing neighbors to complain. Rocky and his brother had become bonded, with Rocky as the dominant. Rocky tended to bully his larger brother, eating his food, taking his treats, but also played the role of protector and alpha.

Detailed update notes on our foster dogs are posted regularly. For a listing of updates and Doggie Tales that include Rocky [click here]. A summation of his progress is included below.

In roughly chronological order, newest at the bottom. Click the thumbnails to enlarge. Some pictures are linked to a Doggy Tale or video about Rocky, click those to open the related story or video.

As a final entry on this end (if I get an adoption picture, I’ll add that) Rocky is an energetic fellow with a sweet nature under the drive.  He plays well with others in that he will get as rowdy as another dog will tolerate, but back off when that limit is reached.  When he shares the yard with low energy dogs like Buddy Beagle they end up walking around together.

Rocky no longer sees himself as Blaze’s protector (and master).  The two get along great but can also play with others even when separated.

He’s a good little fella and will only get better as he is exposed to new environs and more sedate dogs.  His play group here were all pretty rowdy.  Happy Tails, Rocky!

One comment on “Rocky Steele: Notes on a foster dog”