This strikingly handsome dog takes a bit to warm up to strangers, but is calm and friendly when he does.

Taken into custody by Animal Control when the young man who owned him went to jail for charges not related to the dogs, he was underweight and nervous.

Bailey has been with us for almost a week and has changed quite a lot in that time.  When Animal Control dropped him off here last Monday He was a wild thing on the leash and getting him to his kennel was a struggle.  Once he settled down he has been manageable.

Temperamentally, he’s skittish:  he flinches at touch and seems fearful if I come up on him unexpectedly, although once he realizes it’s me, he relaxes and enjoys the petting.  He’s walking well on a lead and I can let him wander the yard supervised but unattended while I clean his kennel.  He does not yet come when I call him, so he’s always dragging a 20 foot lead when out of his kennel.

He rooms with his sorta-sibling, Hunter, and they get along fine except that Bailey is greedy about food and treats and will snatch Hunter’s away from him.  Hunter lets him, so I feed Hunter separately.  Bailey shows little interest in other dogs when he’s out in the yard with them.

Bailey just mastered the “Paw” command.  He has known and responds well to the “Sit “command.  And the last few times I’ve called him, he has come running, so we’re making progress with that.  He knows he’s not allowed to go up the walkway toward the door of the house.  When he starts nosing up that way I call, “Bailey, no, come back out in the yard.” and he immediately returns to the play yard.  He is quite bright and willing to obey.

He has also become much more affectionate.  He now enjoys a good petting and will seek it out.

Bailey was neutered last week.  He did really well and has not been licking at his incision, so I didn’t need to cone him.  He is healing well and his skin condition seems to be going away with the antibiotics that were prescribed for him.

Hunter was adopted over the weekend and Bailey got a bit upset when “those strangers” but his brother in a car and drove away.  But he has coped with it.  The only change I’ve seen long term is that he seems more affectionate toward people.

I moved Bailey into Room #4, where Hunter had been staying because Hunter was an exceptionally well behaved boy and being in a minimum security room was not an issue.   Bailey is settled here enough that I was confident we would not try to dig out either.  And I need the high security room Bailey has been staying in for Helo who is a confirmed digger.  More like a tunneler.

I put Helo in Room #1 this morning and let Bailey out of his room for a yard run.  He trotted over to Helo — and chewed him out big time for being in HIS room!  I spritzed him with the hose and he decided to let it go and move on.  They’ve been okay since.

Bailey has a ticket to ride the rescue bus on Sept 11th.

Bailey was not happy about getting into the truck or about going back to  the veterinarian.  But this time no one cut anything off of him, in fact no one even poked him with a needle, so he was happy about that.

The rash on his belly is gone and the fur growing back in.  His neuter incision is healed.  He is in great shape and ready to travel on Friday.

It’s always sad when one of our babies leaves us, but in this case we have a special note of happiness to add.  A.R.N.N.E. contacted me to let us know that Bailey has an adopter lined up.  A young, retired police officer who has helped the rescue out a lot over the years.  So, after his State ordered quarantine, Bailey will be going straight into his forever home!  That is wonderful news.  Happy Tails, Bailey! 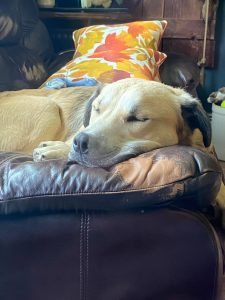 Bailey has settled into his home and, judging by that face, is a happy boy!