Yet another member of the Del Rio Husky Horde picked up as a stray.

Yet another stray Husky picked up in Del Rio.  He has been neutered and is wearing a rabies tag, so he had a home.  But the tag is registered in another county.  Did he run off?  Was he dumped?  Was he stolen and escaped?  We have no idea.  The rabies tag offers little info and there is no microchip.  In any case the shelter will not hang onto him because adopting Husky’s to locals has never worked out.  Every one has been returned.  It’s better for the dog to find a Husky rescue to find them a proper home with someone who appreciates this breed’s unique qualities.  A Pathway to Hope is one such rescue.  PMFC is fostering until transport can be arranged.

In chronological order, newest at the bottom.

I have gone by the shelter to evaluate Bobby.  He tried hard to push out he door when I opened it, but once I was inside and the door latched he was sweet and calm.  He even rolled over on his back to get a belly rub.  We have no open kennel for this boy, so I’ve arranged to board him for a week.  I’ll go there as often as I can to do a SAFER test and get him accustomed to me.  I am to move him from the shelter to boarding Monday morning (the 27th).

Bobby gave us a scare on Wednesday: while in the play yard he went over their 6 foot high fence.  He hadn’t shown any interest in the fence before so this was unexpected.  But the emergency ended quickly because Bobby was just hungry for some BBQ from the place down the street.  He trotted down there, the fella tossed him some meat pieces to hold his attention while Steve caught up and snagged him.  He’s back in his room safe and sound, but he’ll be leash walked from now on!

I picked Bobby up from Kathy’s Grooming Parlor, where he is boarding,  and took him to Cedarwood Veterinary Hospital for testing and a rabies vaccination.  We had some errands to run on the way, but those all went unusually smoothly and we were running 1/2 hour ahead of schedule.  I decided we should stop in at the Park-n-Float on River Street to relax together while we wait for the clock to catch up to us.

Bobby went to Cedarwood Veterinary Hospital today for his health certification so he can travel across state lines this weekend.  He did well and the staff at Cedarwood commented on what a well behaved dog he is.  They thought his conversation with them during the exam was hilarious.

I picked Bobby up from Kathy’s Grooming, where he was boarding, at 2:00 today.  We’ll have almost 12 hours together before we hand him off to the long-haul transport for his ride to New Jersey at 1:30 AM.

Bobby’s hand-off went well.  I managed to stay awake and alert all the way through.  I didn’t start getting sleepy until we were through Newport and on our mountain roads toward home.

Bobby was SO well behaved: we made several strolls through the grass and trees that separate the RV parking area from the semi parking area, but mostly he just sat with Marie and me behind the truck, watching the activity and being really good.  He got conversational a couple of times, but just because he was curious about what we were doing, and it was kept low volume.  No yelling or screaming — that was held back for after Melinda was back on the road.  She texted and said he was YELLING at her!  I suggested that either he did not share her taste in music or he was upset because he called “shotgun” and he was not riding shotgun.  He IS a Husky!

While Melinda was laid-over with us we got to play with some puppies while Melinda cleaned out the little poop-machine’s crate and change the pad.  She runs a nice, clean ride.  It does not stink, and everything is clean and pleasant for handlers and passengers.  Even the ones who yell at her. 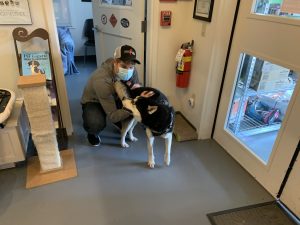 Bobby has been adopted!  Happy Tails to you Bobby!