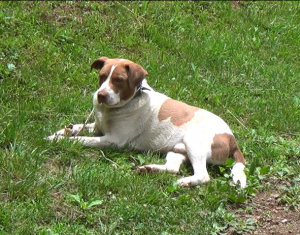 Boomer is a big fellow, part Pit, part St. Bernard, but he has an extreme camera aversion.  But otherwise he’s a great dog.

All of our details on Boomer were lost in transit as we moved this web site.  These articles that mention Boomer survived for your browsing pleasure.

Originally published May 30, 2014 Boomer had his Immiticide treatments for his heartworm condition last week and spent several days feeling quite puny. He’s doing better now. He’s got a sparkle in his eye and a bounce in his step again. He’s ready to run and play. So this is an especially dangerous time in […]

We had a pop-up thunderstorm roll in this morning as we were getting our day started.  It gave advance notice in the form of continuous, distant thunder so I dashed out to feed The Brown Dog Gang and let them run in the yard to relieve themselves before it arrived.  Lennon and Blondie went with […]

This is a foster dog diary post. Updates will be added to the end of this post rather than posted as a myriad of individual posts. That keeps all updates on Gator in one place and in chronological order. The last update was posted: March 28, 2017 (photo gallery) Individual Adventures: Gator the Adventurous Pibble […]

Before I begin, let me remind you that Blondie Bear is scared of gunfire and thunder. When she hears these she bolts to HairyFace’s side and insists on being petted until the scariness passes. It had been an unsettling morning. Millie went for a truck ride with HairyFace. Almost surprisingly she came back. Usually when […]

Hi, Cochise here. HairyFace has been talking to Jen at the Newport Animal Shelter about a meet & greet between Buster and Melissa. We know this because Blondie sneaks into Hairy’s computer to look at his e-mail and Facebook when he goes out to garden. We’re not sure what a meet & greet is but […]

Kingsley and I took our last ride together this morning. Kingsley has lived with us for the past 3 months. Almost 3 months: tomorrow would have been his anniversary with us. During that time we helped cure him of a heartworm infestation and taught him “civilized” behavior. He was pretty unruly when he came […]