This is a foster dog diary post about Martin. New information will be added to the end of this post so all info on this dog is kept in one place and in chronological order. If you subscribe for updates, a short note will be sent when updates are posted. If you don’t subscribe, check back periodically to see what’s been added.

This sweet, affectionate little fellow looks like a puppy, but he’s not.  He is almost 2 years old, thus fully grown, and a really good boy. This precious boy was removed from an abusive environment, along with several other dogs.  He was living in a small pen on someone’s porch.  But you would not know it by his behavior, he is as loving and eager to please and any dog from a perfect home.  Martin was adopted, and well loved, but had to be returned due to no fault of his own.

In chronological order, newest at the bottom.

We only had the privilege of fostering this sweet boy for a weekend.  We “borrowed” him from Newport Animal Control because we knew he was gentle, calm, and affectionate, as well as being a really good looking dog.  The Quilts & Canines event was coming up and we figured that would be a great venue to help this boy find a forever home.

I picked him up on Friday and took him to our favorite groomer: Kathy’s Grooming Parlor in Newport.  She brushed all the under fur out and bathed him.  He came out looking and smelling so much better.  He came home and spent the night with us. and we took him to the show on Saturday. We put him in a portable kennel in front of our booth.  It had a roof to keep the rain and or sun off of him.  Many people came over to visit with him.  Almost all commented on what a well behaved boy he is.  Several said they’d adopt him in a heartbeat if it wasn’t for (something).

Someone we are familiar with who was also a “vendor” at the show, came to visit him several times.  Finally she said that she just loved this boy and would adopt him in a minute, but can’t afford the adoption fee right now.  Another near-by “vendor”, Cathy, overheard this conversation.  A little while after Ms. R left, Cathy came and asked if she could take Martin for a walk.  We know Cathy well and were confident in her ability to manage Martin.

They walked around the perimeter of the show and ended up at Ms. R’s tent.  There they stood and talked for a while.  Then they called me over.  We discussed several things including what was involved in an adoption and what the adoption fee covers.  It’s really quite a bargain, there is no “profit” involved for either Animal Control or the Veterinarian.

Then Cathy said, “If I pay the adoption fee and a couple months of food, would you adopt Martin and give him a good home?” Ms. R said, “Yes, I’d be happy too” and just then, Martin stood up and hugged her!  We were all near tears at that point.

I filled out the adoption paperwork with Ms. R and we agreed on a time to meet at Animal Control so they could finalize things and schedule Martin’s surgery.

That appointment went off without a hitch this morning, and Ms. R took her new family member home with her.

But it seems the fencing Ms. R has around her yard is not high enough to keep Martin in her yard and she’s afraid he’s going to get hurt by running loose.  So, with a broken heart, she returned Martin.  We will begin looking for another home for this sweet boy.

It has been an afternoon of whirlwind communications.  The connections that were made here are multi-faceted and difficult to explain, but there was a lady, Martha, who stopped by to visit with Martin several times while we had him at Quilts and Canines.  She was thinking about adopting him but wasn’t sure she and her husband were ready for another: their last dog had died of old age not long ago.  By the time she decided she did want to do this, Martin had already been adopted by Ms.R.  Martha was disappointed, but thought, “If that wasn’t Gods plan for them …”

Today I put the word out that he was available again and it worked it’s way quickly back to Martha.  Martha called me.  We discussed things.  I liked what I heard, she liked what she heard.  We have a meet & greet between Martin and Martha and her husband scheduled for tomorrow afternoon.  We are excited and hopeful.

Martin came in after he had dinner to join our gang for Friday Sci-Fi night.  The dogs all got chewies while Marie and I ate dinner.  When the dishes and tray tables were cleared away  Martin came out to cuddle with Marie in front of the fire.

At bed time Martin went back to his crate and did fine while we were milling around getting ready.  When we settled and the lights went out Martin got lonely and fussy, so I went to sleep on the sofa to be near him.  That made him happy and he slept through the night.

This morning he got up and went outside to pee with the other house dogs, then Martin and I went to the den to kill time on the computer.  Martin wanted to help.

I took Martin outside and he played with Blondie Bear while I cleaned kennels.  He was ZOOMING around and having just the BEST time!  That wore him out and when we went inside I trimmed his toenails, wiped the dust and dirt off of him with a damp cloth, then brushed him out.  He gave me no trouble at all with any of this.  He is SUCH a good boy!  He’s resting in his crate with a hoofie until it’s time to go meet his potential new family.

The meet-n-greet went well.  They loved Martin, Martin enjoyed running around in their large fenced back yard, which includes a large gazebo with a BED in it!  A large house with lots of rooms to explore, and he was perfectly well-behaved  — well, except for eating a bowl of cat food.  But no one held that against him since it WAS on the floor.  He liked both Martha and Dick, and wanted to meet their cats, but the cats were hiding.

Martin came back home with us for the weekend to give his new family time to prepare for him to move in.  We will do the paperwork and make it all official on Monday.  Dick and Martha have a history of taking in unwanted dogs and keeping them until they pass on of old age.  They have no dogs at the moment, their last one having been euthanized to end her pain after having been with them for 16 years.  They said they weren’t going to get any more dogs.  But then Martha met Martin … well, one more.

We all met at Newport Animal Control so the management there could fill out the paperwork and make the adoption legal.  Then Martin went home with Mommy and Daddy who are having a tough time remembering to refer to martin as he or him because their past several dogs (all long term pets) were female and that pattern is ingrained.  Martin says, “I don’t care, as long as you love me.”

We are 0 for2 with Martin, and the reason for the return this time is even more sad than his losing another home.

Martins new dog Daddy is the one who stays home with Martin during the days.  Mom works most weekdays.  It seems having a bouncy 50 pound dog around has  brought home to them just how bad Dad’s health issues are.  Martha told me, “I don’t know which is worse, losing Martin or realizing that my husband is so sick.”

Martin even came to an understanding with their cats.

My heart goes out to them, this is really hard for them both.

Martin is back here with us, and we think we have a solution for him.  I’m waiting on a return message, then we’ll know.

UPDATE: Animal Rescue Network of New England has accepted him and has made reservations on a rescue transport that rolls through here Friday, November 8th.  He needs a couple of tests done and a Health Certification before he can travel across state lines, but three times should be the charm for this charming boy.

Martins Health Certification went well yesterday.  He is healthy over all, free of heartworms and free of intestinal parasites.  So he is cleared for interstate travel next weekend.  He likes playing outdoors in this chilly weather, he should do well in New England.  He’s also quite entertaining at meal times.  We enjoy dinner and a show with him around.

We have a ‘No Dogs On the People Furniture’ rule in our house.  Guess who feels he’s above the rules?

This morning we were admiring Martin’s wonderful feet. When we were done he said, “OK, I let you see my feet, now you owe me a belly rub.”

On the way to meet Martins ride to New Hampshire, Martin decided he liked looking out my window best.  Once we met up with the PETS Transport, Martin was eager to ride in the BIG truck.  At one point he was standing on his hinders with his fore-paws up on the ladder trying his best to get up there by himself like the driver had.  He could not quite manage that so I lifted him up there once the driver had Martin’s roomette set up for him with the blanket and hoofie we brought along. 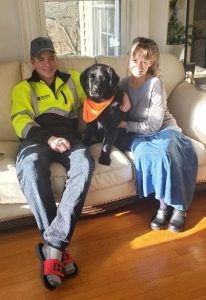 Martin, has been traveling the East Coast with his foster-to-adopt family.  That family has decided they officially LOVE this boy and officially adopted him today.  They’re calling him Duncan.  Martin says, “That’s okay as long as I get to sleep on the bed.”

The young man in the photo is a home-schooled teen who is his best friend.  He takes him for walks several times a day and rides his bike with Martin running alongside.  He spends a lot of time with Martin.

This is another example of shelters, fosters, and rescues working together to save canine lives and improve human lives.

A tip of the hat to City of Newport Animal Control for pulling him out of a bad situation, and Animal Rescue Network of New England for finding him the perfect forever home.  Merry Christmas, Martin!

11 comments on “Martin NAC: Notes on a foster dog”