Normally in the mornings, Buster-Bob likes to go outside for a long sniff-n-pee session. Early mornings ARE especially pleasant because they are cool, and calm, and there are no bugs buzzing around. Most of us like going out in the early mornings. Blondie does not because the grass is wet. She’s fussy about her feet. Buster likes mornings the most and stays out much longer than the rest of us.

But it was raining this morning. Shorty and Buster did go out because they needed to “go”. Blondie and I can hold it a while longer. 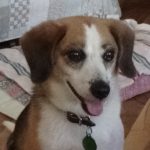 In fact, Shortcake displayed her dedication to housebreaking. She trotted out the door, found it to be raining and circled back to the door. HairyFace held it open for her, she looked at it longingly, thought about it a moment, then mumbled, “No… I NEED to go.” and and ran down the steps. Good girl! She makes me proud. Both fosters took care of business quickly and came right back in. After getting toweled off, Buster just chilled in his crate. He likes his crate. It’s his safe place. It’s soft and cushy. And it is stocked with chewies. He is allowed to come out and wander around with us when he wants to as long as HairyFace or NiceLady can monitor him. But this morning he preferred to chill and rest up for his exciting day ahead.

After breakfast, while HairyFace was hooking Buster up on a leash to go out to the truck for his ride into town, Shortcake dashed into Buster’s crate and yelled, “Dibs on these hoofies!” Blondie looked at her, aghast, and said, “Can’t you wait until he’s out the door before you try to claim dibs on his stuff? What kind of sister are you!?”

“Besides, ” Blondie explained, “he took those hoofies from MY toy basket, and they’ll go back in my basket. But we can all share them.”

Shorty agreed to that plan. “OK, no dibs.”