Sarah is a sweet, calm, girl who’s had a rough time lately.

Sarah’s owner moved away and left Sara with the roommate.  The roommate then got sick and was put on Hospice care.  When Sarah could no longer be cared for she was surrendered to City of Newport Animal Control.

I’ve received word that Sarah has passed her heartworm test and has been accepted by ARNNE.  We will foster Sarah for them through her spay surgery and preparation for travel.  She is severely underweight.  I’ll be picking her up from Newport Animal Control tomorrow.  First I need to sanitize the kennel Charlie Bear was using.  Though he stayed here only a few hours, he messed it up and it needs a thorough cleaning and disinfecting.

Marie and I picked Sarah up from Newport Animal Control late this morning.  Normally I transport new dogs in a transport crate strapped down in the back of my truck (under a topper) because you never know for sure how a new dog will react to riding in a vehicle.  But Marie insisted that she hold Sarah on her lap instead.  She rode very well.  Sarah, I mean — well, Marie did too for that matter.  They were both very well behaved.

When we got home Sarah took a walk in the yard with me then went into her kennel.  She was fine with that as long as one of us was near, but when we both went inside Sarah started crying and fussing and pawing the kennel walls.  We thought she’d settle down.  She didn’t.  We discussed how cold it’s supposed to get tonight and how scrawny little Sarah will do in the cold, even with a dog-house stuffed with blankets.  Marie said “She smells really bad.  She’ll need a bath before she comes into the house.”  So I gave her a bath.  Sarah stood stock still for me and actually seemed to be enjoying it.  Then I set up a small crate and put the biggest, softest blanket I could find in there for her.  She was happy as a clam in silt as long as one of us was in visual range.  When we both left, Sarah got upset and repeated her performance from outside.

I thought maybe she needed to potty and took her out on a leash.  We had a chat while outside.  I told her that that sort of behavior will get her sent back to her kennel.  If she wants to be a house dog, she will need to behave like the other house dogs.  Well, not like Buddy Beagle: he goes all Beaglesaurous on us if he hears a squirrel or a loud car, or a horn honk, most anything will set him off and he races through the house baying and hollering.  That’s Buddy.  He’s old and set in his ways, and thinks he’s Superbeagle and charged with protecting the whole lot of us.  Don’t be like Buddy.

To my TOTAL amazement, Sarah made a huge turn around and was fine with us leaving the room.  Sometimes for extended periods.  I did see Blondie Bear sitting near her crate in a conspiratorial manner.  I think Blondie was explaining the house rules to her in dog-speak, and she listened.  Since then, she’s been an absolute doll!

At dinner time I gave her some kibble with home made stew on top, like everyone else got.  She watched them digging eagerly into their meals and was equally eager when I set her bowl in her crate.  She stuck her head in the bowl, sniffed at it, lifted her head to glare at me, “What is THIS stuff?  Do you expect me to eat that?” and she curled up in the far end of her crate.  I went outside to feed the rest of the pack.  They each get a potty run after they eat, so I was gone a while.  When I came back, Sarah’s bowl was licked clean.  I suspect Josephine came by and said, “Hey, if you’re not going to eat that, can I have it?  I LOVE that stuff.”  and Sarah decided to eat it herself. 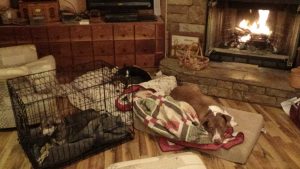 She proceeded to have a great evening while I made a scratch-built pizza and salad for people-dinner, which Marie and I ate in the living room while watching an episode of The Waltons.  That’s what we do on Saturday evenings.  After dinner Marie lit up the fireplace and all the girls camped out in front of it.  Including Sarah.

It’s bed time now. I’ll take her out for a final walk, move her crate into the bedroom, and I expect we will all have a peaceful night.

After a reasonably successful night, we needed to leave Sarah in her crate while we went to church.  She was not thrilled with that, but she settled down after we were out of the house and she was still in her crate — and it was not trashed — when we got home.

This evening she got some free-foot’n time to explore most of the house (closely supervised).  The two carpeted rooms are off limits for free-ranging right now.  As she progresses with housebreaking that limitation will be lifted.

After wandering around with me for a while Sarah decided to settle on a blanket behind Marie’s desk chair in the dining room.  She felt secure there.  Out of the way but pat of the group.  She slowly accepted that even Blondie Bear, though six times her weight, isn’t going to eat her.  Soon, she was running with the big dogs, “‘Scuse me, ‘scuse me, coming through!”

When she had enough, she asked to go back in her room (safe space) and finish the kibbles she didn’t eat at dinner.  It has been a very pleasant day.

Sarah slept through the night last night.  I got up around 5:15 AM and she was ready to go out.  Did all her business and rushed back inside eager for breakfast.  Unfortunately she is being spayed later this morning, so no breakfast for surgery patients.  She’s not happy about that.  She got another bath last night to get rid of the remaining shelter-funk.  She is now Sweet-Smelling Sarah-Sue.

When I went to pick Sarah up from the Vet, she was NOT happy.  She felt awful and cried the whole way home.  I settled her into her crate and she continued to cry.  I crushed a pain pill and mixed it into a tiny bit of wet dog food.  She didn’t want it, so I scooped it up on my finger, opened her mouth and scraped it off on the roof of her mouth and tickled her throat to encourage swallowing  Her mouth worked but she wasn’t spitting it out.  She swallowed it.  After a bit she settled down and went to sleep.

At bed time I tried to get her to let me carry her outside to see if she needed to pee. Not interested.  Completely not interested.  She hasn’t had anything to eat or drink since yesterday so she probably doesn’t need to go.  I’ll let her rest.  She should feel a little better tomorrow.  Hopefully.  Stoic, she is not. 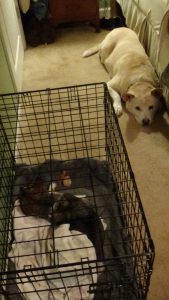 Little Sarah Sue drank some water last night but refused to eat. She slept all night, with Nurse Blondie attending. This morning she woke @5:30. I took her outside. She peed and pooped and came right back inside. She accepted a small treat then curled up to sleep some more. 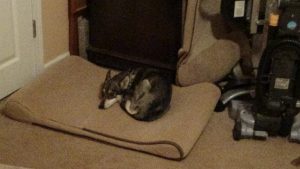 Still feeling rough, but not crying. She’ll have breakfast and another pain pill in a while.

Today is Thursday: errand day for us and we have many places to go as we prepare for the upcoming Meat-N-Greet fundraiser.  But we’ll break them up into sessions and come back here between to check on our little patient.

The day is now half over and Sarah is feeling much better.  Up and around and starting to eat again.  YAY!

This day is over now and Sarah has done very well.  Tomorrow should be even easier for her.

Sarah Sue is gaining a lot of confidence.  Today she wandered off during a potty run.  She can’t go far: we have a fenced play yard, but it’s big.  Until today she has never ventured more than 50 feet from me and even then she’d keep checking to be sure she could see me.  Today she went loping down the yard, tried to get the Beagles to play with her, then trailed after Blondie Bear who had gone down to The Low Corner.  This is way around behind the barn.  Then she scouted out the far fence line, by herself.  When play time was over I called and she came trotting over, quite pleased with herself.

The past few mornings have been wet out, even if we wait for the rain to abate before making our first potty run.  Sarah stands on the porch and looks down at the gravel and step stones like she’s afraid of something.  So I pick her up and carry her around to the play yard.  While she’s laying along my left fore-arm she gets this imperious look: “Look at *me* peasants, *I’m* being carried.”  She makes me laugh. 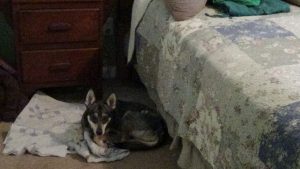 This independence also shows up in her choice of resting places.  in the past she would be close to wherever I was.  In her crate if I was in the kitchen, on the dog bed in the corner if i am in the Den, and in the evening when I’m sitting in bed reading, she is here, beside the bed.

Lately she has been spending more and more time during the day right here, often all by herself.  One night I decided, since she’s been good with her housebreaking, to let her sleep there that night.  But when I was ready to call it a day and went to brush my teeth, Sarah went over to the corner where her crate always sits at night and was looking distressed.  So I got her crate in place and she happily trotted in, circled around three times and settled in for the night.  She still needs that added security to be able to sleep soundly and know she’ll be unmolested.

Sarah got her Health certification today, so she is free to travel next Friday for her transport to New Hampshire.

When Sarah arrived here she was a timid little thing and was scared of the other dogs, especially the bigger dogs.  She’d refuse to come in the house if Callie Roo or Blondie Bear were still in the laundry room, and she’d hide in out of the way corners to avoid them while loose in the house.  Her crate became a safe haven for her, a place she could always go to be comfy and protected.

But in her time here she has gained a lot of confidence.  A couple of evenings ago she even got spunky with Callie Roo and the two of them played.

That confidence is spilling over into  misbehavior, though as she’s started challenging some boundaries. 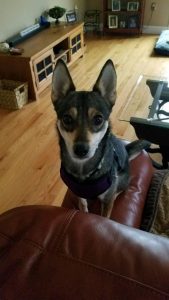 Sarah Sue made the long trip up north, did her two days of quarantine, and is now decompressing at The Sousa Spa.  These are wonderful, kind folks who will take great care of our little sweetheart until she is placed in a forever home.  To follow along with her adventure in New Hampshire, check in with the Sousas on Facebook.  They are good about posting “letters home” and photos.