Skittish and something of a crybaby right now, she’s been mistreated. We’ll need to restore her trust.

Part of a free-ranging pack of three sibling Husky mixes, this little girl was the shrinking violet of the group.  They were caught and brought in by a good Samaritan who didn’t want them to get hurt by wandering free.

While she was running freely in a large play yard at the shelter I could not catch her.  She would approach if I was empty handed and let me chuck her under the chin or scratch an ear.  If I carried a slip lead, she wanted nothing to do with me.  With the shelter staff’s help we got her crated for transport.  In her kennel, I was able to do the SAFER test and gain some acceptance from her.

She desperately needs brushing and a bath.

That afternoon I took her out on a long lead for walks in the yard.  It is rumored she can go right over a chain-link fence so I’m taking no chances.  With each outing she became more comfortable with and more adept at walking on a lead.  In all cases, she was ready to go back into her room at the end.  It is already her “safe space”.

I did take out the privacy barrier between her room and Adam’s.  That reduced stress levels quite a bit.

Buddy says, “I like these two, they may be honorary Beagles.”

Cyrus has lost most of her skittishness already.

I brushed her and got a grapefruit sized ball of fur off her.  There is more to go still.

She will now come to me when I call her in her kennel and roll over on her back for a belly rub while I clip on her lead.  She is also doing much better at walking in the yard on a long lead.  Far more calm and manageable.

Her thinking is more scattered than her brother Adam, so she’s not learning her commands as quickly, but she tries to please by doing something cute.  If nothing else, she defaults to rolling over for a belly rub.  She is also into using her paws to touch me, and likes to lick faces.  She’s such a love!

Cyrus no longer needs a lead in the yard.  She comes when I call her and has stopped eye-balling the top of the fences as though deciding if she could climb over.  She is learning her commands, but doing it in an unusual way.

Cyrus is hysterical. She watches me put Adam through “sit” several times (he’s very good at that one).  Then when it’s her turn she will stand up on her hind legs and wave a paw at me.  “No, that’s not ‘sit’, no treat.”  So she flops down on her back and wiggles.  “No, still wrong”.  So I show her “sit” again.  She fights it, but eventually she does sort of sit on her left leg, for a moment, “Close enough, GOOD GIRL, SIt!” and I give her a treat. I think we’ve gotten to where she knows what I want from her, but she has to make a game of getting us there. The treats are less important to her than they are to Adam.  She likes to play.

Cyrus is SUCH a sweetie!  Quite affectionate and gentle.  She is recovering well from her spay surgery.  Her incision looks great and she has not been licking at it.  She HATED the cone that was installed after surgery and quickly kicked it off, then went back to sleep.

She is sharing a kennel with her brother, Adam, they prefer it that way and that freed up space that I could take in Roscoe Redusky when that need came up.  He left on transport last night, but I’ll leave Adam and Cyrus together.  They’re both “fixed” now and are happier together.

I feed them with separate bowls but in the same kennel.  I just have to remain on-station to distract whoever gets done first so he or she does not go after the other’s bowl.  There are no hostilities when that happens, I just want to be sure both get their full portion of food.

About a week ago I found that Cyrus was making a habit of standing in her water bowl to cool her tootsies.  So I laid out the dog’s kiddie pool and put an inch of water in the bottom.  She had had spay surgery a few days before and should not be getting wet, but just standing in the pool should be okay.  She did indeed enjoy cooling all four feet at once, but as soon as I looked away for a moment, SPLOSH, and she was lying in the water.

I ran her out, dried her off and put up the pool.  She cried and fussed about it for quite a while.

Now she is recovered and can play in the pool again.  Will she still want to?  Will anyone else?

Cyrus has shown no symptoms of Parvo, and she is going in to the veterinarian today for her Health Certification so she can transport on Thursday the 16th (Passed and has been Certified).

Cyrus has learned well the “sit” command, and sometimes tosses in the cutest head toss as if to say, “I can obey AND be cute!”

Cyrus has a distinct dislike of our new arrival, Smokie.  This comes as quite a surprise since she gets along fine with everyone else.  Perhaps because he’s new she see’s him as an interloper.  I’ll see if she settles down over the next couple of days before transport.

I set up the pool again on the sidewalk in front of Cy & Adam’s room so I could leave it there.  Cy makes use of it each time she’s out and Blondie Bear AND Blade have both dunked their feet as well.  I was surprised when Blondie did it, normally she hates getting her feet wet.

We just got word that Cyrus, now known as Eve, is living an amazing life with her new family.  A family that has an amazing pool for her to play in!   Happy tails sweet girl! 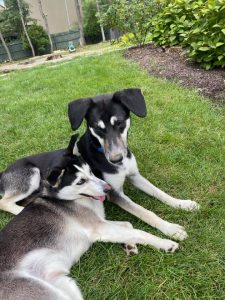 We got word today that Cyrus, now known as Luna, is being reunited with her brother and best friend, Adam. The family who adopted her has decided to adopt him as well.  She looks very happy to have him back!